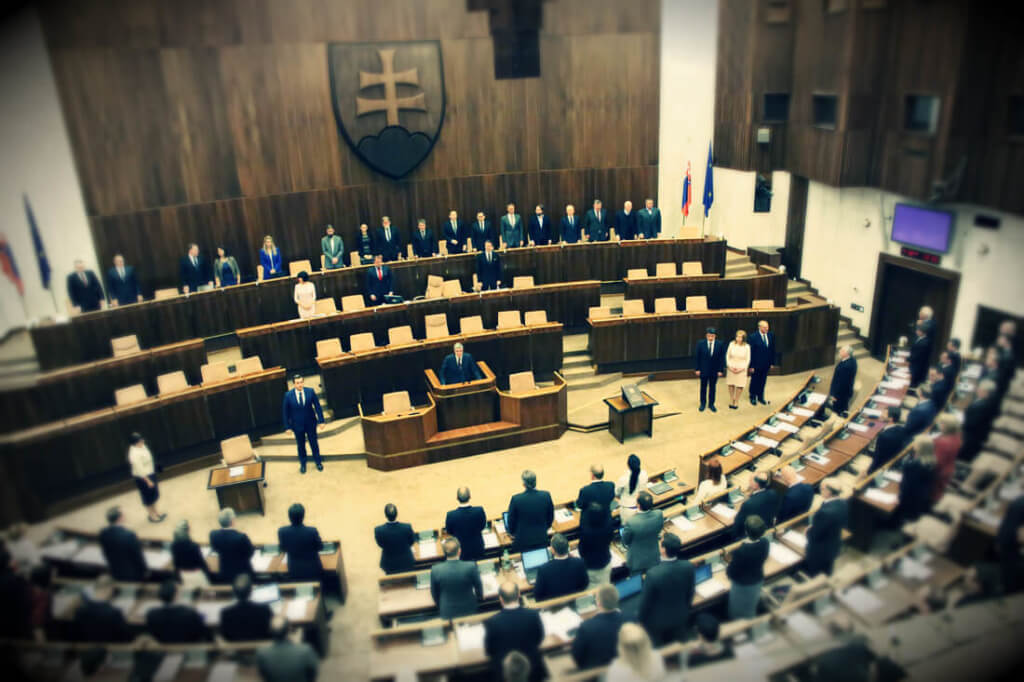 Punishment for the arrogance of the ruling Smer-Social Democracy Party in Slovakia could not have waited any longer. However, a mere glance at the newly occupied parliamentary seats after the Slovak elections in March shows that the old order will not be reformed but rescued.

Representing us in parliament we find fascists, produced by a rotten state apparatus, TV actresses, reading the headlines, and self-appointed knights, fighting ‘decline’ with chaos. The kind of society which neoliberals repressed from their dreams is back. They never really believed in democracy; now they will bear to witness the “government of the people” in its most primitive form.

A glance at the newly occupied parliamentary seats after the Slovak elections in March shows that the old order will not be reformed but rescued.

The failed “Gorilla” mass protests of 2012 expressed the public’s despair and powerlessness against the extensive links between politics and business. One of their organizers, Peter Pčolinský, is now a member of parliament, representing, however, the conservative wing. Indeed, there are no suitable candidates who convincingly present a challenge to the status quo. With whom would whistleblower Veronika Remišová want to form opposition to the government? Party chairman, and pathological liar, of Ordinary People and Independent Personalities (OLáNO), Igor Matovič, who could not even pass the polygraph test he constantly invites others to take? Or the liberal Lucia Nicholsonová, supposedly an exemplary figure for working mothers, who has rejected support for nurseries and childcare allowance? Or perhaps we should hope that the crème de la crème of Slovak politics will spare the time in their rich social life to drop by parliament to repeat the twisted logic of billionaire Boris Kollár that assault or rape by a Christian from the majority is no cause for worry, it’s strictly a family affair? This parliament reflects our unique descent into barbarism.

It would seem that we are witnessing a collective moral failure, like the ship-wrecked children in Golding‘s Lord of the Flies. Those children, facing an existential crisis on a desert island, bereft of social constraint in the form of parental supervision and values, turn upon each other in unrestrained anger and untempered power. Mounting a pig’s head on a stick does not work as a deterrent; but simply as a symbol of the abstract fear that taps into to an evil dormant in all of us. When did the Slovak people lose their sense of shame?

Liberalism, which contributed to establishing basic political equality and economic independence, is unable to address the current systemic failures. The internal contradictions of capitalism have stretched beyond its limited field of vision. They have fallen into its blind spot – the place on the retina through which the optic nerve passes obscuring a particular object. The political mainstream is largely concerned with ensuring freedom for the rich, through minimizing taxes, and an environment friendly to large business. In doing so, the political mainstream is unknowingly opening the door to fascism. Wage earners are denied the right to defend themselves, but still the middle class remains dissatisfied. It is time to look at things from a different perspective.

According to Trotsky, national socialism is a movement in which “the petty bourgeoisie runs amok”. During economic crises, people suffer real hardship and this produces a crisis of hegemony in the Gramscian sense – in other words, the disintegration of the ideological framework which ensures the consensual reproduction of the relations of production. And because the petty bourgeoisie is powerless against the owners of capital, it hopes to defend itself at the expense of the working class.

Liberalism, which contributed to establishing basic political equality and economic independence, is unable to address the current systemic failures.

The petty bourgeoisie consists, on the one hand, of shopkeepers and traders, rentiers and producers, who, possessing little capital must rely on high-interest loans from the bourgeoisie to finance their businesses. On the other hand, it is also made up of officials and managers, the so-called new middle class. Both groups own little capital, but enjoy a precarious measure of independence in the management and control of their personal and employed labour. As a result, they have a self-perception of exclusivity; they see themselves as socially superior to, and are hostile to, the working class.

In our present crisis, the precarious balance between the classes is maintained by an overt capitalist dictatorship in which the dominant role is taken on by a political party. In this sense, national socialism embodies everything “as contradictory and chaotic as in a nightmare: (the) party calls itself socialist, yet it leads a terroristic struggle against all socialist organizations. It hurls lightning bolts at the heads of the capitalists, yet is supported by them”.

Boris Kollár represents the benefits of the nouveau riche lifestyle (luxury, prominence, mistresses) which are still very attractive to the petty bourgeoisie. He has been brought to power by those who suffered the most as a result of current developments. But all he offers are reforms that maintain the status quo. He appropriates the radicalism of the masses in the name of a reactionary ideology of preserving property, family, religion, and the present order. Instead of improving conditions, he repeats history in farcical form.

Meanwhile, the political establishment is slowly abandoning democratic practices. This shift can be witnessed, for instance, in the stance certain parties have taken. They are retreating from efforts to prevent corrupting poor voters, moving towards open calls to control the votes, not only of fellow MPs, as was the case in the attorney general elections, but also of workers, as when Richard Sulík proposed that employers should demand unused ballot papers from their employees. Previous insistent appeals to act responsibly and not to withdraw from electoral participation are now being substituted by official offers from the liberal party SaS (Freedom and Solidarity), which in 2009 offered € 7 to everyone who would sell their vote and thus refrain from voting. So much for the principles of equality and responsibility behind the notion “one person one vote”.

According to Trotsky, the “bourgeoisie” dreads the rise of fascism like the pulling of an aching molar. But if the crisis of liberal democracy deepens they will accept it as a preferable outcome which would enable them to maintain their property.

[easy-tweet tweet=”A single individual is not powerful enough to stop the internal contradictions of the system. “]

Public attention is drawn to the figure of the politician as a kind of a focal point for divergent interests. Based on the idea of a moral individual, a savior is sought who will end all trials and tribulations and who will reinstate the “norm”. If a politician (not the groups linked to him) steals, it is necessary to find a politician with moral principles who does not. Yet, a single individual is not powerful enough to stop the internal contradictions of the system. The mobilization of a large enough number of people to defend the public’s interests against capital is rare in a liberal democracy.

A version of this article first appeared on POLEblog.sk.

Peter Takáč
Peter Takáč is PhD candidate in philosophy, but also works in the private sphere. His research interests focus on ideology and are inspired by the philosophy of Slavoj Žižek and Alain Badiou. He writes for the blog POLE, and has published on other portals as well as with the Association for Leftist Theory (SOK).
> see other articles <