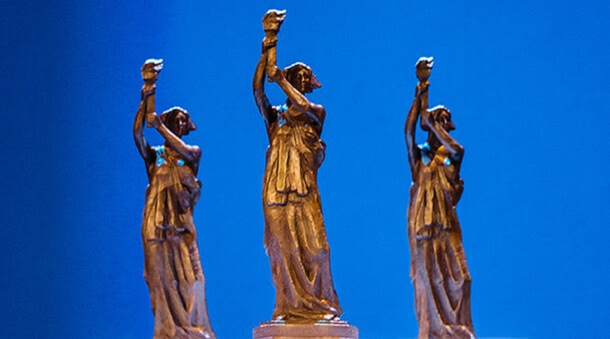 Human Rights Foundation (HRF) announces the recipients of the 2016 Václav Havel International Prize for Creative Dissent. The 2016 laureates are Iranian cartoonist Atena Farghadani, Russian performance artist Petr Pavlensky, and Uzbek photojournalist Umida Akhmedova. They will be honored in a ceremony during the 2016 Oslo Freedom Forum on Wednesday, May 25 at 9:30 CET.

Atena Farghadani was a prisoner of conscience of the Iranian regime. She received a 12-year prison sentence for a cartoon she posted on social media depicting Iran’s parliamentarians with animal heads. Farghadani was charged with “colluding against national security,” “spreading propaganda against the system,” and “insulting members of the parliament.” When she was briefly released in 2015, Farghadani publicized the abuse that prisoners suffer in Iranian jails and was promptly put back behind bars. Farghadani then went on hunger strike and suffered a heart attack while in prison. Her case sparked the social media campaign #Draw4Atena, with cartoonists from all over the world sharing their work in support of her case. Farghadani was released on May 3, 2016.

“Iran’s Foreign Minister recently said that Iran does not jail people for their opinions. This is a blatant falsehood, and Atena Farghadani’s imprisonment flies in the face of any such claims,” said Havel Prize committee chairman Thor Halvorssen.

Petr Pavlensky is a Russian artist, best known for a series of performances in which he used self-mutilation to protest the government’s political crackdown. On the night of November 9, 2015 Pavlensky set fire to the front door of the building that historically houses the FSB, Russia’s security services, and its predecessor, the KGB. The door is not in use, so the protest was largely symbolic. Pavlensky explained “The FSB uses unending terror to hold power over 146 million people. The Lubyanka burning door is a glove that society throws in the face of the terrorist threat.” Pavlensky made no attempt to flee and patiently waited for the police in front of the flaming doors with the gasoline tank still in his hands. The resulting image of the FSB’s burning doors came to be seen as a metaphor for the gates of hell. Pavlensky is currently on trial and facing charges of “damaging a cultural heritage site.”

“Petr’s artistic precision and courage are remarkable. A lone artist standing up against the most powerful institution of Vladimir Putin’s Russia is an important symbol – both politically and artistically. His act also reminds us that we should have burned down the entire accursed building in 1991 when the USSR collapsed,” said HRF chairman Garry Kasparov.

Umida Akhmedova is a photojournalist and the first female documentary filmmaker in Uzbekistan. She specializes in subjects that have historically been regarded as taboo in the country: gender, poverty, and ethnic issues. She has been accused of “slander” and “damaging the country’s image” for publishing a series of photos about life in rural Uzbekistan.

“Umida’s work is an inspiration to a new generation of photographers in Uzbekistan. Despite the government’s attempts to manufacture a polished, happy image of the country, she exposes the reality of life in one of the world’s most closed societies” – said John Peder Egenæs, Amnesty International Norway Secretary General.

The three Havel Prize Laureates will receive an artist’s representation of the “Goddess of Democracy,” the iconic statue erected by Chinese students during the Tiananmen Square protests of June 1989. Each sculpture embodies the spirit and literal reality of creative dissent at its finest, representing the struggle of truth and beauty against brute power. The Laureates will also share a prize of 350,000 Norwegian kroner.

The Havel Prize is jointly funded by grants from the Brin Wojcicki Foundation and the Thiel Foundation. The Brin Wojcicki Foundation was established by Sergey Brin, co-founder of Google, and his wife Anne Wojcicki, co-founder of 23andMe, a leading personal genetics company. The Thiel Foundation, established and funded by entrepreneur and venture capitalist Peter Thiel, defends and promotes freedom in all its dimensions: political, personal, and economic. Václav Havel was chairman of HRF from 2009 until his death in December 2011.

The Havel Prize ceremony will be broadcast live online at oslofreedomforum.com beginning at 9:30 CET on Wednesday, May 25. The event will take place at Oslo’s Nye Theater. Registration is open to the public. Please email [email protected] for more information, and follow @HRF and @OsloFF on Twitter for updates.

This article was originally published on hrf.org.