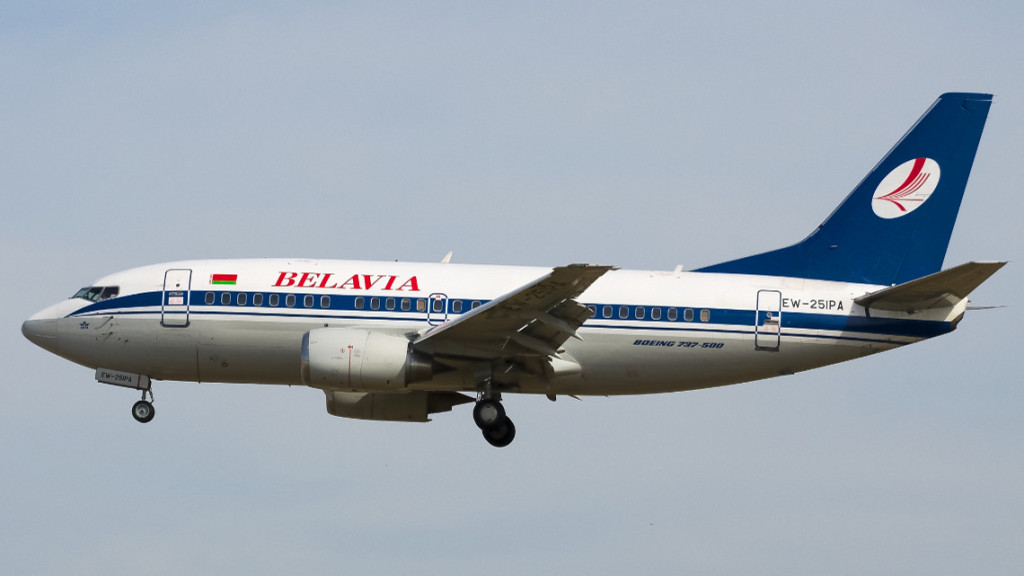 Immediately after I disembarked from the plane from Minsk, an officer flicked through my passport only to inform me I had no stamp stating that I had entered Russia. To use the language of international cross-border traffic, my visa had not been opened: you enter a country, you get a stamp that opens your visa, and you get another one on your way out, which closes it. This applies, of course, to one-time visas, just like the one I had.

“Of course I haven’t got one,” I thought. “I’ve just got out of a plane, there was no border control, so how could I be supposed to get a stamp?” My passport was retained. As for myself, they invited me to the office so that I could explain myself.

In Minsk I had stayed three days, going to meetings at the local cultural institutions. A direct flight to Kaliningrad was the only viable way to make it on time to the next meeting on my agenda.

After three hours, a fourth gentleman appeared – the most important one, wearing a coat. The driver who came to pick me up from the airport explained to me that you always have to call someone who is higher up the ladder.

At the office to which they showed me another gentleman had already been waiting. Apparently he was someone more important, because the one who stopped me never spoke. After my explanations and an hour of telephoning, the two gentlemen were joined by a third one, superior to both of them judging from the look of it, because he was wearing full suit. After three hours, a fourth gentleman appeared – the most important one, wearing a coat. The driver who came to pick me up from the airport explained to me that you always have to call someone who is higher up the ladder. So I waited for the gentlemen to make their respective calls to whoever was above them.

During the initial conversation, where I was supposed to explain how it happened that I illegally, without a stamp in my passport, entered Russian territory, I learnt that flights from Minsk in Belarus to Kaliningrad in Russia have the status of domestic flights, and thus passengers on them are exempt from border control (no stamp is placed in one’s passport). If it’s a domestic flight maybe the Belorussian stamp will do: I got one on my arrival in Minsk three days before. No, it won’t do: Belarus is a separate country, a gentleman explained. Fine, but if they are a separate country why aren’t there border checks in the arrivals? And how do I get that stamp anyway?

To the gentlemen the case was clear: I had to wait.

I learnt that flights from Minsk in Belarus to Kaliningrad in Russia have the status of domestic flights.

So I kept sitting at the airport, happy because I had wireless connection and so could be in touch with my friends, and upset by the prospect of being sent back to Warsaw (although the winding-up of connections between Kaliningrad and Warsaw could now turn out to be an unexpected blessing: there was nothing to send me back in), tired with a situation of having no idea what is going on and why I have to wait.

After three hours, that is more or less after the appearance of the gentleman in the coat, I learnt that I was not the first person in a situation like that. Which sounded as if there were procedures for instances like mine, but it seemed as if no one knew who was to make the decision.

After four hours the friendliest of my gentlemen revealed to me that they would let me in, but it was impossible to say when.

Another hour passed, and I was showed to the office again, this time for writing up some documents. Once again I told them how I had come to Kaliningrad and what for: that was the easy part, for I had official invitations. I also told them what I did in Minsk, though I was rather selective: I did not want to reveal the names of the people who had invited me to Minsk, just in case. The whole talking I did in Russian, in which I am about as fluent as a dog might be: I get the general sense of what is being asked but it’s a whole different story when it comes to my responding.

Plus I was not that eager to tell them everything too. And so fortunately missing from the protocol of the interview is the information that I am a journalist (once, when applying for American visa, I said I worked for the media, which turned out to be a mistake: it caused the interview at the US embassy to last much longer than was absolutely necessary): instead, I said I was an artist. It is also one of the few professions whose Russian name I happen to know.

Why didn’t I call the Polish consulate? That would not change anything. I had to wait my time. Just as my friends from Kiev, who on the Ukrainian-Polish border so often experience the humiliation of being regularly tortured with questions about invitations in addition to their visas, even though they have had their visas for a long time; so I had to face temporary detention in Kaliningrad. Still, it lasted longer than most border checks and bureaucratic hurdles.

I ran into a catch-22, a Kafkaesque situation, which escapes all rational explanation. Finally, the gentlemen decided that it was all fault of the Belorussian airlines, who sold me the ticket for a domestic flight even though I was a foreign citizen, and they said I should sue the airlines. And in spite of the airlines’ fault it was I who had to pay the fine of 2,000 roubles. One thing was sure: no fault to be found with the Russians.

All declarations signed, I was asked if anyone pulled me by the hands, or used violence. Nobody did. The lady who drafted the document asked if we could add a statement that I had not been subjected to violence. And that one, too, I signed. 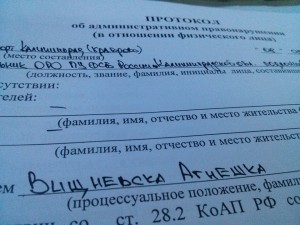 Why didn’t I ask for an interpreter? With an interpreter I would have understood more of what I was being told. But then they would have been able to ask me more questions. I chose to stick to the golden mean of semi-communicability.

Going over ever new fields of the protocol, well into my sixth hour at the airport, I was asked if I had any complaints about those who apprehended me. As I have already mentioned, the gentlemen were very anxious to look okay. I said I had: I was sitting there for so many hours, and they had never even offered me a cup of coffee. The gentleman stood up from his chair and asked if I wanted it with milk and sugar. And so I had my coffee. And after a while – I got another one.

I spoke with Boris Buden and Ilia Budraitskis about borders between the East and the West. Buden said that borders are a cultural construct. They may be, but then people really do spend hours and hours on end at airports and on borders, and quite often for no reason.

I arrived at Kaliningrad at 6 p.m. I got to the hotel just before 2 a.m. The next day I spoke with Boris Buden and Ilia Budraitskis about borders between the East and the West. Buden said that borders are a cultural construct. They may be, but then people really do spend hours and hours on end at airports and on borders, and quite often for no reason. When travelling within the boundaries of the European Union we normally hardly give it a thought, but every time I go to Kiev or Chisinau, or to see activists from Belarus or Russia, I experience those borders as extremely palpable.

In Kaliningrad I spent two days. To the border I was traveling by bus and there the story repeated itself. I still did not have the stamp, but I had the protocols and statements. We were asked to pull over. The driver was quick to lose his temper: “How long can one wait like that? It’s been fifteen minutes, come on.” I was not going to tell him that in fact one could wait like that really long hours. The border guard called his superior. The superior searched my papers and after thirty minutes I was given my passport back. I was told I should have no problems entering Russia in the future. We will see.