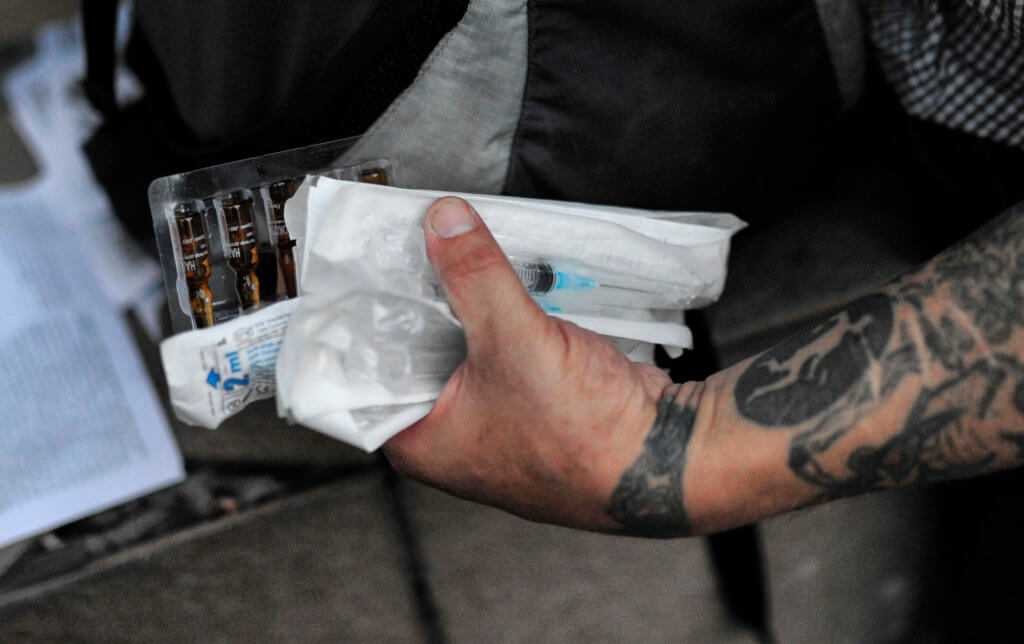 Dawid Krawczyk: So, are you a foreign agent, or not?

Ivan Varentsov: No, I’m not.

The Russian Ministry of Justice claims that you are, though.

Information and Advocacy Coordinator at the Andrey Rylkov Foundation for Health and Social Justice (ARF) – a Russian NGO with the mission to promote and develop humane drug policy based on tolerance, protection of health, dignity and human rights.

Our organization, the Andrey Rylkov Foundation has been included on the list of foreign agents, that is true. But we don’t agree with this and we find it utterly absurd. What does being labelled as a foreign agent really mean? For many people especially those with a Soviet background it means the same as being called a traitor to your own country, to your people. We do exactly the opposite.

We try to ensure that people have proper access to the health services that they need. We do outreach work on the streets of Moscow throughout the week, providing people who use drugs with sterile needles, syringes, ointments, and condoms, as well as information. They also have an opportunity to receive medical and legal counseling. We’ve been operating since 2009 and we are the only organization providing direct harm reduction services in Moscow.

And you’re,  so to say, “accused of treason” because of these sterile needles?

For years we’ve been advocating for opioid substitution treatment in Russia and for access to naloxone, a medicine which helps prevent death from opioid overdose. We criticize the current drug policy of the state quite openly and that’s why we are on the list.

Technically speaking, there are two conditions that an organization has to fulfill in order to be considered a foreign agent: it receives financial support outside from Russia and it engages in political activities. The financial support is really any kind of money you can get, even crowdfunding. The Ministry of Justice’s definition of “political activity”can refer to any attempt to influence public opinion on a given topic.

Does this mean that virtually every NGO could be considered a foreign agent?

That is the logic of this law. It’s a very useful instrument for the government. As you can apply it to anyone, everyone is kept in the line.In practice it is used selectively and only to those NGOs who make those in power uncomfortable.

We don’t aim only at influencing public opinion. We demand from the state an actual change in the law, which is currently doing a lot of people harm.

What do you mean exactly?

Right now in Russia we have epidemics of both HIV and Hepatitis C.

For now, these are concentrated epidemics amongst people who use drugs, although in some regions, such as Sverdlovsk Oblast and Samara Oblast, a generalized epidemic has been announced. The Hepatitis C virus is an even bigger problem than HIV, because you can apply for a free treatment for having HIV. It’s not uncommon for a person to have HIV, Hepatitis C or Tuberculosis and drug dependency all at the same time. In Russia, this is almost certainly a deadly combination.

If you have Tuberculosis you have to be admitted to a clinic. But if you’re dependent on or addicted to drugs, this poses a problem. Remember that in Russian hospitals you cannot have any drugs on you, and you won’t get any substitutions for these drugs – it would be illegal. So, the outcome is that you’ll either escape from the clinic to get a fix, or you’ll smuggle it into the clinic. If you get caught, you’ll be punished for violating the rules. The likelihood that you end up on the street with Tuberculosis and HIV is painfully possible, and this kind of scenario often results in death.

If patients received substitution treatment, methadone, for instance, could it break this vicious circle?

It would help a lot in such cases. Opioid substitution treatment (OST) would significantly reduce the number of infections because methadone is taken in the form of a syrup. Fewer injections mean fewer infections but the lack of OST is not the only problem we struggle with. Death from overdose is another huge problem and it could be relatively easy to prevent, just by administrating naloxone.

Is it illegal as well?

Actually, it’s legal and you can buy it in the pharmacy, but only if you have a prescription. But this doesn’t make any sense. If you crash, you can’t apply the medicine to yourself, right? Someone else has to do it for you. If naloxone remains unavailable, more people will die from an overdose.

The Russian Ministry of Health uncompromisingly says “no” both to opioid substitution treatment and naloxone without prescription. Why?

Honestly, I don’t know why.

But I’m sure you’ve told someone from the ministry the same thing that you’ve told me: that OST would reduce infections and better access to naloxone would reduce deaths from overdose. Haven’t you?

Of course, we have. What they usually say about harm reduction interventions is that there is no evidence of the effectiveness of these methods.

They believe it’s some Western way of doing things, which is a wrong way by definition.

OST and sterile needles are an incentive to use drugs, according to the Ministry. In Russia, there is a zero-tolerance policy towards drugs and there is not much space for debate on this.

We couldn’t stand this babbling about the lack of evidence, so once we even printed out every scientific research paper we found that proves the effectiveness of harm reduction services. Then we put all of these research papers in a box and sent it straight to the Ministry. But I don’t think they’ve read any of it.

And all of them honestly believe in the “drug-free world” or, at least, in a drug-free Russia?

Some of them do, some of them don’t. Their actions are what matters, though. The head of The Federal AIDS Center, Professor Pokrovsky, openly speaks in favor of harm reduction measures including substitution treatment in Russia. Yet he is probably the only official who doesn’t hide his support for harm reduction.

Were you surprised with the news that you are listed as a foreign agent?

We learned it from a newspaper. At first, I thought ‘OK, here we are…now what?’ But surprised? No, it didn’t surprise me at all.

And what are the specific consequences of being on the list?

One of them is that now we have to label everything we publish with a note: “produced by a Foreign Agent”.

Are you being serious?

Absolutely serious. The form of the warning isn’t specified, so we use this picture of a spy in a black cloak and fedora hat. We have had to label our website, twitter account, and all leaflets in such way.

Besides that, we can’t receive any financial support from public assets. They call us agents because we look for money abroad but they wouldn’t give us a single rouble for what we do.

They also tried to fine us for about 5,000 dollars in roubles equivalent – because we didn’t denounce ourselves for being foreign agents.

Wait a minute, I don’t get something here. Are you supposed to denounce yourselves?

The system works as follows: the NGO is obliged to verify itself. If it fulfils the criteria of being a foreign agent, its employers should ask the authorities to add the NGO on the list. Should they fail to do it and the Ministry of Justice recognises them as foreign agents, they are fined.

And what’s next for you? Have you paid the fine?

No, we haven’t. We went to court instead and we won.

So, you are not “foreign agent” anymore?

No, we’re still considered to be a “foreign agent”, but we’re not obliged to pay a fine, for now at least. The case we won regarded the fact that the Ministry of Justice didn’t have a right to audit us because not enough time had passed since the previous control. As a consequence, the administrative case against us was closed and a fine was not applied but the court upheld the decision of keeping us on the list. There will be another hearing soon and we’ll see what will happen there.

You don’t seem to have high hopes for the outcome.

Because I don’t have them.

I can’t really imagine the Russian government radically changing its drug policy in the near future.

The only thing we can do is to continue our everyday work. For 15 million people in Moscow we are the only NGO providing direct harm reduction services: needle and syringe exchange, counselling, etc. Does this change the epidemiological situation? Not exactly. But what we can do is help some people. In 2014, thanks to the naloxone we distributed, 223 people were saved after experiencing a drug overdose. We know this because the people who saved them reported back to us, but the number is probably larger. If the authorities are not eager to support our actions, they could at least leave us alone.

For the moment, we crowdfunded the money to pay the fine, just in case we are fined in the future. But what we will do with the fines after that? I honestly don’t know.