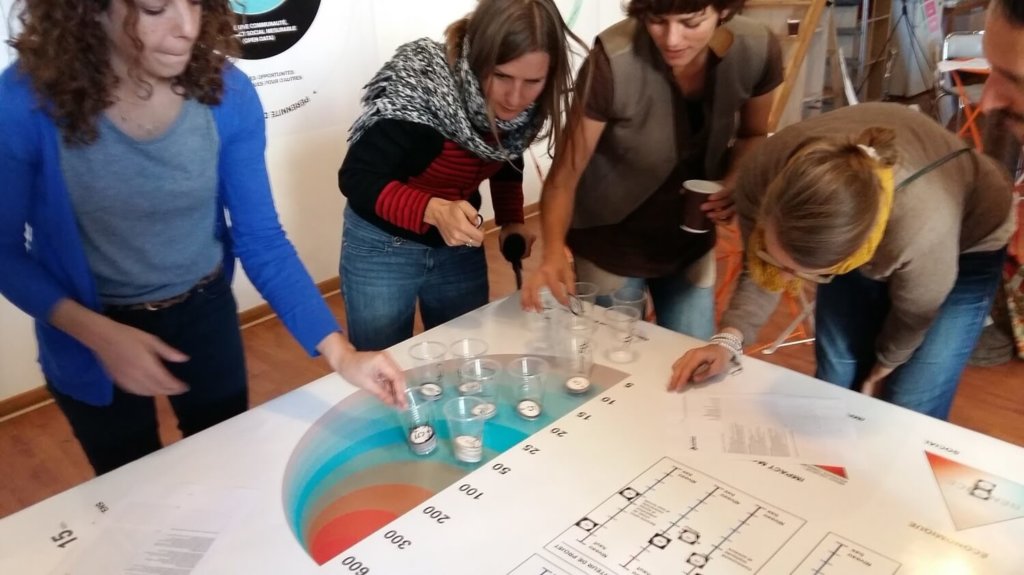 As a part of our work and involvement for the past two years in ECF’s Connected Action for the Commons programme, we recently had busy and intense meetings in France and in Barcelona with Les têtes de l’art and Subtopia to discuss common activities and strengthening alliances.

Our participation to the 2nd Rencontres Internationales de l’Innovation Sociale in Montpellier, where we facilitated different activities under a shared interest in helping to generate more opportunities and resources for civic culture, gave us clear impressions of the social and solidarity economy which is taking concrete steps in France.

We started in Marseille with a #LearnByFunding workshop hosted by Les têtes de l’art, our sister ECF hub and cultural instigator, with the goal of not only helping people and organisations with participatory projects which could be crowdfunded via the Goteo open model, but also to connect key organisations at the regional level and other important partners and stakeholders from Les Têtes de l’art’s network, to discuss the role of institutions in the “match-funding” formula.

A second short workshop followed the first one, including representatives from the regional chamber of solidarity economy, cultural incubators, the city council, and more stakeholders, to gather additional knowledge and indicators around real projects considering crowdfunding. In that final round, the focus was on impact and effectivity according to public and private institutions, key agents we consider a priority to enable civic-oriented mechanisms for sharing resources, and a further step in the future of ethical economy and crowdfunding.

This also represented an opportunity at the methodological level, where we could put into practise more “learn by doing” approaches (in our case, also “by funding”), as well as workshop materials and strategies for interaction between all agents involved in the process: civic entrepreneurs, supporters from civil society, observers and responsive institutions.

After a first test and feedback session in our last workshop in Moldova with Oberliht in November 2015, and the positive and constructive results from this workshop in Marseille, we feel the approach is concrete, offering possibilities as a knowledge and experience transfer model. In fact, more practical workshops and spaces to compare and connect projects and entrepreneurs are necessary in order to identify the institutions’ needs to reconsider their role and participatory channels.

In Marseille, we also had the opportunity to meet with Sam, Ina, Marion and all the incredible and cool team of Les têtes de l’art at their headquarters, and we were invited to present Goteo in one of their regular community activities such as the last “apéritif” of the year with guests from the SMart cooperative.

Back in Barcelona the day after the Marseille workshop, we met a delegation of the Connected Action for the Commons Swedish hub Subtopia at our space in Fabra i Coats. With Karin Lekberg and Anders Lindgren, who have hosted the Idea Camp 2015 in Botkyrka, Sweden, we discussed recent improvements within the Goteo source code and features, as well as potential alliances for crowdfunding connecting with their regular incubation activities of artistic and social projects. Here again, we discussed which stakeholders, networks and similar agents like in the French case could join a wider local and regional coalition for the implementation and governance of a Goteo platform.

We followed with one of our monthly regular events involving communities using the Goteo platform. The format, just like in Marseille, was inspired by the informal but powerful concept of the apéritif: people gathering and discussing around a table, with drinks, chips and shared interests.

We then all joined more people at the inspiring community-owned printing press of l’Automàtica, where after identifying motivations in crowdfunding with all the participants, the host team described their successful and intense Goteo campaign for moving their machines to another space. This connects to the same emergency concept that, at the very beginning of their project, helped them buy and recover such industrial presses and the ancient and reliable knowledge behind, in order to give it a new life.

The session was followed as usual by more questions and discussions, and a second part where the people behind the Foto Collectania Foundation shared their plans for a crowdfunding campaign with Goteo, for their new exhibition and gallery space to be opened soon. Again, the format allowed for constructive feedback in such a key moment before projects enter into crowdfunding campaign mode, where people can still influence the process by brainstorming about potential rewards or ways of disseminating and engaging people “the open way”.

Enric Senabre Hidalgo
I am a member of the Platoniq collective, co-founder and service designer at Goteo.org – the open source network for civic crowdfunding and distributed collaboration for encouraging the independent development of creative and innovative initiatives that contribute to the common good, free knowledge and open code. I am also Vice President of the Observatory for CyberSociety and teach software studies at the Open University of Catalonia, where I hold a Master’s Degree in Information and Knowledge Society. I am a Certified Scrum Master by the Scrum Alliance, and co-founding member of the Spanish chapter of the Open Knowledge Foundation.