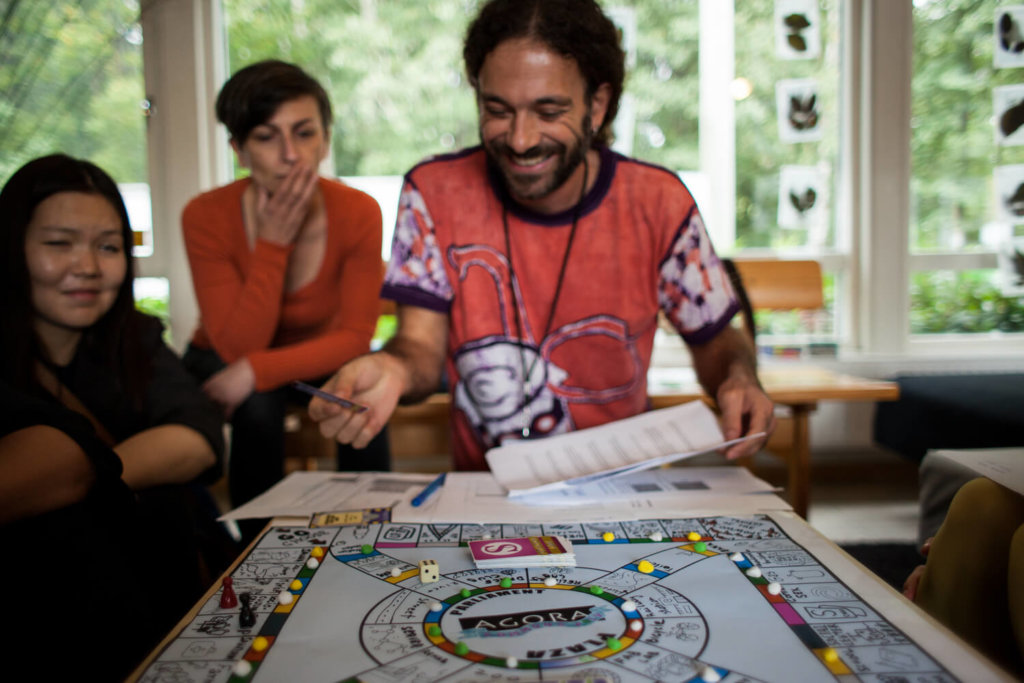 Update on 27 November 2015: we’re very happy to announce that Vassilis’s crowdfunding campaign on Goteo has been successful. We’re looking forward to seeing his documentary on community Networks in the Sarantaporo area in Greece.

Vassilis Chryssos is one of the Idea Makers who attended ECF’s first Idea Camp in Marseille in 2014 to develop his project building a wireless network and support community in the remote rural area of Sarantaporo in Greece. The Idea Camp is a key part of our Connected Action for the Commons programme – an action research network focusing on key topics including the urban commons, public space, culture and sharing economies. Since 2014, Vassilis has also attended ZEMOS98’s 17th Festival in Seville where he co-developed the game Commonspoly – and more recently he joined us for the 2015 Idea Camp in Botkyrka, Sweden to demonstrate the game and talk about his work.

Vassilis, you have recently launched a crowdfunding campaign on the Goteo platform to raise money for a documentary. Can you tell us what it is about and why it’s important?

The documentary narrates a story about an initiative of a group of people taking place on a remote, isolated, rural area in the foothills of Olympus mountain, in Central Greece, in the village of Sarantaporo. An intervention, which started off as a means to keep contact with each other as years went by, evolved into a modern wireless communication infrastructure that provides locals with Internet connectivity, in a region where previously no alternative was offered. The project started back in 2010 first with Sarantaporo village and has expanded since then in 14 more villages in the area, which eventually were interconnected.

Shortly, this group of people created a ‘small, local internet’ for local communities to share resources, deploy useful local services and communicate with each other and with the ‘outer world’.

In view of the recent developments concerning the latest EU Legislation about Net Neutrality (which means really bad news for people’s digital rights and freedoms), the importance of building own communication infrastructures in a bottom-up approach is even more stressed, on a European and global scale.

This infrastructure not only tries to bridge the digital divide in the area, but the long term ambition is to become a tool of further local development.

How did you first become involved in the Sarantaporo community and the efforts to build a wireless network there?

Back in 2012 I met with Yiorgos, a university friend whom I hadn’t met for many years since. He invited me to his village (Sarantaporo) to see what it was that they were building there. It was a happy coincidence that in that time the “Battle of the Mesh” warm-up event had been organized to take place in Sarantaporo village, bringing developers and end-users together for three days.

The thing that struck me was the stories of the locals, highlighting a great change in their way of living. Elders learned how to use the computer in order to communicate via VoIP applications with their children and grandchildren abroad, the visiting doctors in the villages started using our common infrastructure to access the national health platform and prescribe medicines for their patients, farmers gained access to new markets for their products and the raw materials they need. Witnessing this kind of impact has been a compelling experience for me, that left me with no other alternative but to be a part of this great team.

Where do you expect to show the film, and how will you make it available to people? Do you know when it will be released?

The documentary is expected to be completed by the end of the year. We will organize a series of screenings in Sarantaporo area, Athens and other big cities around Greece. It will be available online under a Creative Commons License for everyone to share and use freely.

Will it be released under a creative commons or general public license? Are you seeking any further advice about licensing options?

We will release the documentary under Creative License BY-SA 4.0.

Public space, and especially the re-development or governance of public space by the community, is central to this project. It was the theme of ECF’s idea Camp in Marseille in 2014. What impact did attending the Idea camp have on the development of your work?

The Idea Camp experience made us realise the central role of the public space as a commons for local societies. By promoting our work as a local infrastructure managed by the community (and not just as a gateway for wireless Internet connectivity) we offer an opportunity for the people to appropriate the digital public space and use it for the benefit of the local communities. At the same time this presents a great challenge for us in the sense that local people are not tech-savvy and it takes a lot of effort and support from our side to build awareness on this concept.

This project provides an opportunity to connect commoning initiatives internationally. Have you been encouraged by the support you have received from other countries?

Since 2014 we participate in the CONFINE FP7 project (currently reaching its conclusion), which gave us the opportunity to connect to other Community Wireless Networks in Greece and around Europe (Athens, Italy, Austria, Spain) by being part of an experimental testbed. This means that through our network we can access services that are deployed in other wireless community networks and directly connect with their communities. It is a great opportunity for people to connect with other cultures, but one that has not been presently realized. This is related to the previous challenge that I described: we need more people who understand about the infrastructure potential and can put their knowledge and experience in good use for the local communities.

Concerning the impact of our intervention, though, we have been receiving very encouraging comments from many countries of Europe and the rest of the world. We have observed that what we do is really inspiring for people living in rural areas in other places. There are a few cases where we have been approached by such people to assist them with replicating our model for their region as well.

Often, crowdfunded projects rely heavily on local networks and communities of support, but that is particularly difficult in Greece at the moment. Tell us about the problem of people not being able to make online donations.

We recently launched our crowdfunding campaign to fund the documentary we are preparing. During last Summer capital controls were imposed in Greece which means that Greek people cannot use their credit/debit cards or e-banking for international transactions. Although we were recently informed that these have been partially weighed (for amounts up to €500) we discovered to our great disappointment that it only regards specific transactions. For example, if you want to buy air tickets online you are free to do so, but you cannot donate money for a social cause! This has taken us by surprise. We propose ways for people to circumvent this, by using a PayPal account for example, but most of our supporters are not comfortable with creating such an account. At the same time we are continuously trying to find a way round this, but unfortunately the competent Financial Ministry still has not answered our request.

How can people contribute to your campaign, beyond just giving financial support?

We need people who can spread the news, help us build awareness about our project beyond our region. We also need people who can translate our dissemination material or add subtitles to our documentary in other languages. Finally we would like to see more communities engaging in similar activities and we are willing to provide our expertise and know-how to help them build their own community wireless network.