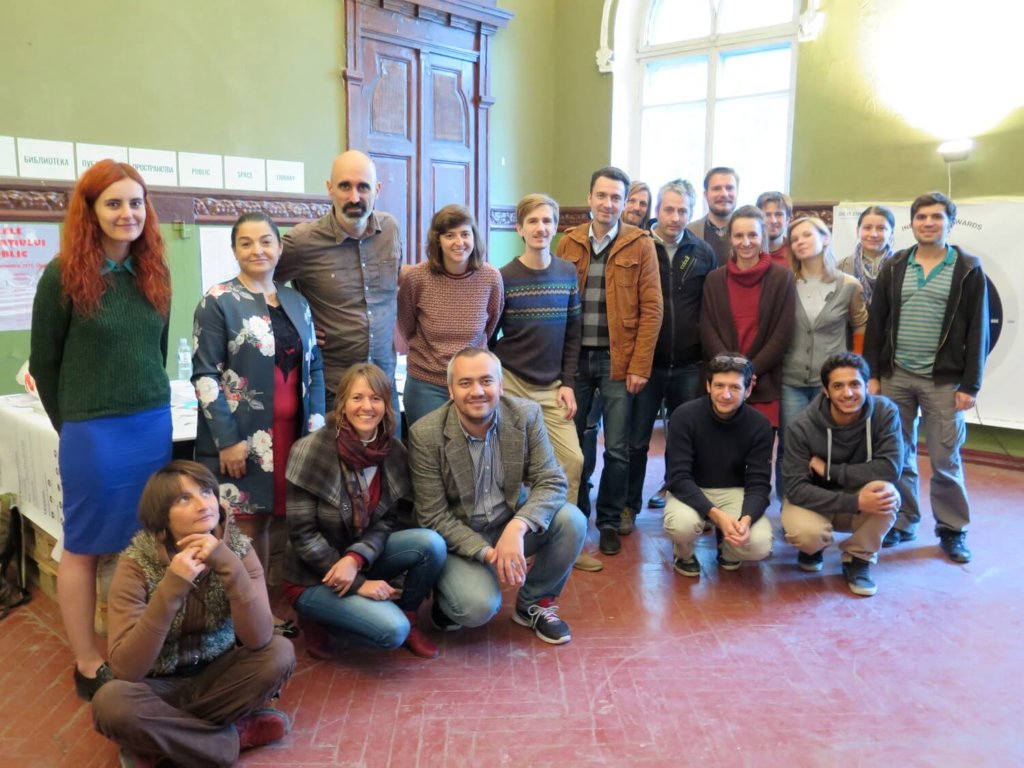 Participants of the workshop in Public Space Days.

Last month, part of Goteo’s team had the fantastic opportunity of visiting Oberliht, our Moldovan partners from the European Cultural Foundation’s (ECF)Connected Action for the Commons programme. Several days after that, they visited us in two of our co-working spaces in Barcelona and Madrid. What follows is a short story of these two visits but also an account of our observations and discussions during those intense days, when we had different moments of sharing experiences, challenges and contacts around our mutual field of action: the Commons.

Last September, during the Idea Camp 2015: Build the City, we started discussing about the possibility of organising together a workshop on crowdfunding (which is our field of expertise) as invited participants to Oberliht’s Public Space Days conference in October 2015, in conjunction with our partner, ECF.

There in Botkyrka, in the outskirts of Stockholm, with Vladimir Us and Vitalie Sprinceana (who head up the non-profit association for supporting emerging artists in Moldova and safeguarding public space), we discussed the Goteo one-day workshop about crowdfunding and its social and civic implications. We also discussed the possibility of delivering a talk that would present our work during the conference on the Right to the City they were organising. The idea was to share with other experts, practitioners and observers from different countries they had invited ideas, expertise and insights on the complex fields of public intervention, open cultural practices and collective activism .

Our experience in Chișinău, where Carmen Lozano and Enric Senabre from Goteo stayed for the whole Public Space Days event, was fantastic. It was our only second visit to the Oberliht context and field of action, after a previous visit earlier this January for a meeting of all hubs. During the dynamic workshop, we met people, organisations and projects around ecologic, artistic and educational initiatives, who also shared their challenges and engaged in very intense and valuable discussions about the power of openness, the need for collaboration and resources for improving what they do, but also about the complexities, practicalities and technical conditions of other means of decentralized funding –such as crowdfunding– in the Moldovan scene. During our practical and hands-on methodological approach to crowdfunding and crowdsourcing workshop, we had the opportunity to test a little improvement we have been working on lately, involving roles representing institutions and the challenges they faced when selecting or supporting simulated projects. We now know of several participants who have now gone on and set up their own crowdfunding campaigns to support their projects for communities, after attending the workshop.

The rest of the conference was full of intense sessions, where we had the opportunity of learning about projects fighting for the right to public space in Moldova and other neighbour countries like Ukraine, Belarus and Romania, always with shared aspects in the discussion and examples which showed similar threats and responses to privatisation and the lack of shared practises or recognition between projects alike.

We also had the opportunity of explaining Goteo’s practical work through the experience from a first hand perspective from David Juárez and their crowdfunding campaign Arquitecturas Colectivas. They were also participating in the event and explaining their research and development process around Public Space Tools, an initiative funded after the ECF Idea Camp 2014. Another project we happily learnt know more about was the Open Air Cinema, a draft idea presented at Idea Camp 2015 for screening movies and documentaries in the remainders of an old Soviet theatre in Chișinău.

Some days after, it was Oberliht turn to visit us in our spaces in Barcelona and Madrid, and we planned with them different activities to explore what we do and some places and people we are connected with in Spain. We started with an intense meeting in our office at Fabra i Coats, where we explained to Vladimir and Vitalie the reuse of a textile infrastructure from the industrial past of Barcelona converted into a factory for the creative sector.

They could also use this as a contrast having visited earlier during their trip more core cultural infrastructures of the city like Hangar or the CCCB, as well as a visit to the installation Rehogar by our friends Makea in the eco-designed space BioBui(L)t | Espai Txema.

We also deepened the explanation of technical aspects and current developments of Goteo.org and the potential for being adapted and used in the Moldovan context. Through doing this we learnt more about the different examples about the activities and networks where Oberliht operates and where they can escalate the impact of activities of other locally in Moldova.

We also had the nice opportunity of meeting with Paco Gonzalez from Radarq and know more about his project open source public space devices, another collaborative and Commons oriented initiative after Idea Camp 2014, that is currently finishing its initial ECF R&D phase for a kit of resources and knowledge shared by communities and urban practitioners involved in shaping and redesigning public spaces.

After two intense days in Barcelona, with a packed agenda, it was the time for a day visit in Madrid, where they met Carmen from Goteo in Medialab-Prado and learned about the projects and history of this Spanish and international reference hub in terms of digital culture, maker communities and experimental research.

If there’s a city which concentrates a wide variety of cases on current citizen interventions in public space, that’s Madrid. Following Medialab, they all set off for a long walk visiting some spaces where community-based action is re-shaping cultural, environmental and social relations between neighbors and institutions. Gardens, informal temporary occupations in lots, a network of orchards organized by neighborhoods which has managed to transform local regulations, some partially privatized – yet commons – spaces and another must-see civic project in La Latina area, Campo de Cebada, an occupied square for cultural and social local initiatives which is an example of cooperative place-making between citizens and local authorities.

In times where we mostly share daily online communication and work together based on digital platforms, meeting in person and sharing local daily practices is not only rewarding but helps understanding each other’s worries, concerns and achievements and helps co-development.

Carmen Lozano Bright
Carmen Lozano-Bright is the recipient of an R&D grant from the European Cultural Foundation for her research into Southern European commoning practices. She moderates the p2pSquare! Lab on ECFLabs, ECF’s online community space (https://ecflabs.org/lab/p2p-square). She is a member of Platoniq in Barcelona, Spain (www.youcoop.org), one of the hubs in the European Cultural Foundation’s Networked Programme – Connected Action for the Commons.