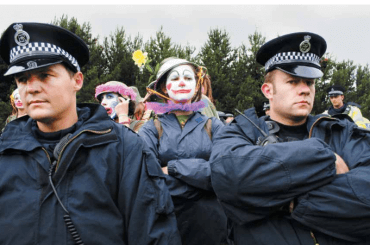 Rebel clown army confronts the G8 Summit in Scotland. From "Build the City."

“Build the City”: The Critical Role of Art, Culture & Commoning

A new anthology of essays, Build the City: Perspectives on Commons and Culture,powerfully confirms that the “city as a commons” meme is surging. This carefully edited, beautifully designed collection of 38 essays shows the depth and range of thinking now underway.  The book was published by Krytyka Polityczna and the European Cultural Foundation in September as part of ECF’s Idea Camp convening.

Thinking about cities as commons is so compelling to me because it gives a structured framework for talking our moral and political claims on cities. It helps makes our entitlements as commoners visible, as well as the scourge of enclosure – two concepts that are not particularly welcome topics in respectable political circles.

The essays of Build the City celebrate the idea that ordinary people – tenants, families, artists, the precariat, migrants, community groups, activists – have a legitimate role in participating in their own city.  The metropolis is not the privileged preserve of the wealthy, industrialists, investors, and landlords. It is a place where commoners have meaningful power and access to what they need. In developing this theme, this book is a timRebel clown army confronts the G8 Summit in Scotland. From “Build the City.”ely complement to the Bologna “The City as Commons” conference in November.

You can download a pdf of the book here – or you can order a hard copy here. Besides ECF and Krytyka Polityczna, the book is a collaboration with Subtopia (Sweden), Les Tetes de l’Art (France), Oberliht (Moldova), Culture2Commons (Croatia) and Platoniq (Spain), all of whom are partners in the action-research network Connected Action for the Commons.

If there is one recurring theme in this book, it is that commoners must devise the means for more open, inclusive and participatory models of democracy in cities – and that art and culture projects can help lead the way.

“Cultural initiatives that challenge the extremely individualized model of the world are worth closer attention,” writes Agnieszka Wiśniewska, a Polish member of the “Connected Action for the Commons” network, “as they may help us re-esetablish social ties and our trust in others.” The real challenge, then, is how to devise effective new structures that can empower commoners in improving governance, building social connection and democratizing power.

Build the City explores this issue from many different angles – art, culture, economics, politics, technology.  Its varied roster of contributors include Michel Bauwens of the P2P Foundation; Richard Sennett, the celebrated sociologist who teaches at the London School of Economics and NYU; Julie Ward, a Member of the European Parliament; and a wide number of artists, critics, and cultural activists from throughout Europe.

A number of essays focus on the importance of public spaces to the functioning of democracy itself.  This is a problem in many cities, from Istanbul to Barcelona, and from Prague to Budapest, where the forces of privatization and “development” are squeezing out the life of the city.

In one essay, Vitalie Sprinceana, a Moldovan sociologist, philosopher and activist, assesses the lasting impact of a 2012 mobilization of citizens in Chisinau against a furtive plan by city government to remake a beloved Europe Square, the site of a public garden and national monuments.  The citizen effort reinvigorated the idea that public spaces must belong to the public in practice, and that politicians and bureaucracies must not dictate the fate of those spaces.

Many other essays explore how citizen-led art and culture are enlivening city spaces – and how these activities are essential to promoting democratic processes in Europe.  The Polish artist and activist Igor Stokfiszewski explained why it is important that we “pay particular attention to artistic activity that aims to encourage grassroots self-expression through art by non-professional artists…..[It] encourage[s] practices that are geared towards the community, shaping extra-verbal ways of creating bonds through developing empathy and reciprocity.”  The art that people contribute to the city helps shape the shared narratives and iconography that defines the place.

One of my favorite chapters in the book is an interview that Rob Hopkins, founder of the Transition Town network, conducted with the cofounders of the Laboratory of Insurrectionary Imagination.  This is an artists’ collective that works with activists to open up new spaces of the imagination in city life.  For example, at a protest at a G8 Summit in Scotland, the group once recruited a “rebel clown army” that did such things as put on lipstick and repeatedly kissed riot shields. The group has also organized the throwing of snowballs at bankers, and turned hundreds of abandoned bikes into machines of civil disobedience.

Explaining such tactics, Isabelle Frémeaux, a member of the Laboratory, said, “The Left is very scared of using desire and the body, and capitalism and the Right are brilliant at it.”  By this, she means that many activists try to marshal facts and statistics to change minds, on the assumption that “people don’t act because they don’t know.”  But in fact, Frémeaux said, “what generally makes people move is not rational thinking but much more often desires and fantasies of what could be.”  She said that “people cling on to things and values that have been the structure of the life for a long time.”  Art can help reawaken us to this reality, and point us in new directions.

The Laboratory, therefore, tries to use art and public theater to reach people’s emotional lives as well as their rational left brains.  “In a sense, art is magic,” said John Jordan of the Laboratory. “It’s a form of magic.  We think that’s one of its powers, that actually things become true when enough people believe in them.  Art is very good at weaving the magic that we need in these moments.”