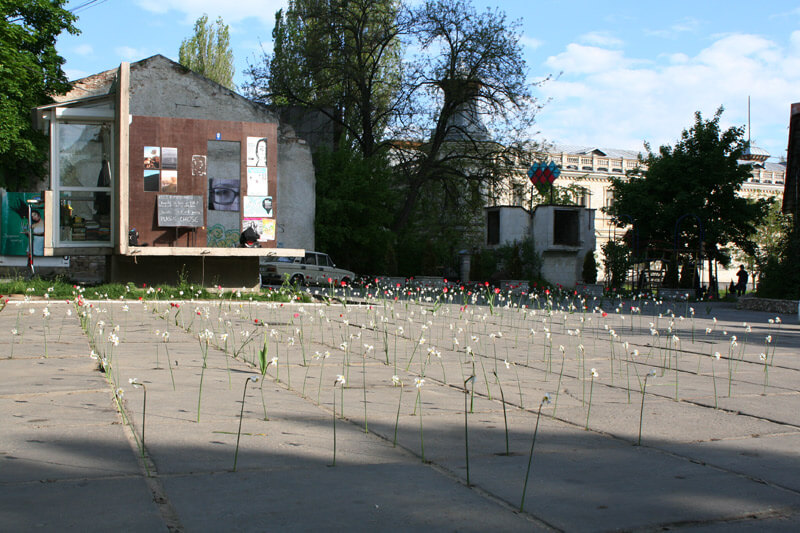 The Moldovan cultural association Oberliht has released the program and open call for participation in the Days of the Public Space, to take place in Chişinău between 13-17 September 2016, together with the tenth issue of Oberliht’s monthly Public Spaces Bulletin and an open call for essays and reports about the transformations of local public spaces, to be published in collaboration with the independent media Platzforma.

This concentration of efforts is indicative of the importance of the event for the local scene of independent cultural groups and urban activists, as well as for Oberliht, which prepares the event both thematically and as organizers through year-long efforts, and conceives it as an open attempt to effect real changes with systemic implications.

An yearly international event, the origin of the Days of the Public Space was the initiative to create the Civic Centre of Chişinău, a platform uniting artists, cultural workers and urban activists from the capital city of Moldova, in a double-edged effort to give visibility to the local independent scene and to create a pressure group for issues taken up with the local institutions.

The edition of 2015 [realized with the support of ECF’s Connected Action for the Commons], did already focus on the right to culture and the right to the city. The event moved between a cultural program and para-cultural events. While the former served as an introduction and overview of the local independent scene, its international coalitions and their discourses and debates of interest, the latter engaged in the production of what could be called cultural surplus values, which are sometimes alluded (but not named) in the conjunction “culture and development”.

The cultural surplus values can be understood as pluri-faceted events or outputs that are creating and spilling value into other sectors of the public life, including the political and economic sectors (but also sectors like the education system or public administration) in a transformative manner. The double character of the work involved is typical for the independent cultural field (also named “third sector” or “alternative” culture) in Eastern Europe and elsewhere, which opens spaces operating beyond the public-private divide, in spite of adverse and often hostile contexts, having thus to develop both the content (such as artistic projects or public debates) and the structural conditions or, simpler put, the working places where this kind of work is possible at all.

Thus, the para-cultural events of the 2015 edition of the Days of the Public Space in Chişinău assumed firstly a para-legal function: the organizers arranged free juridical consultations for urban activists, as well as context-giving conferences introducing concrete legislative initiatives and innovations which have helped other independent scenes, such as those from Croatia or Spain.

Secondly, the forum-like envisioning of the event aimed to articulate a para-political function, by trying to create a pressure group as well as resource hub for urban activists and cultural organisations. Such an informal group could then remobilize both in relation to specific reactive goals (such as getting the local city council to stop the privatisation of an iconic place as Chişinău public park – Cafeneaua lui Guguţă), and in proactive initiatives for systemic change (such as mapping and rehabilitating the Chişinău urban commons), which are especially hoped to come to fruition in the 2016 edition.

Finally, within the self-managed context of the independent culture scene, the event also assumed a para-ministerial function, acting as a hub for centralising the calendars, topics, and actions of the different organisations, groups and individual actors, as well as a para-mediatic function, by using the Oberliht newsletters and bulletins, the Kiosk of the Open Apartment and the associated Platzforma.md group as alternative information centers. In the local context created by such events, the “open calls” of the Oberliht association are actually addressed to a well-defined, yet open audiences: a potential community getting attuned and involved in a process of collective transformation. In turn – and in contrast to many “event” focused development projects – the existence of the local community increases dramatically the chances of follow-up actions and observable growth.

Thus, the members of Oberliht engaged in the social revitalisation of the urban commons of Chişinău throughout the year with a series of events developed in three different spaces: the Kiosk (or the Open Apartment), the Zaikin Park initiative, and the exhibition gallery Zpace. Oberliht developed from 2008 onwards this series of alternative public spaces in Chişinău, and sought to enter in coalitions with other groups developing such spaces, in a specific local context of revitalising the urban commons.

The local context is defined by the paradigm shift from the general orientation of state socialism to the general orientation of neoliberal globalization, which meant, in so far as the Chişinău public space is concerned, a shift from a public space densely signified with markers of authority (yet designed with numerous open spaces dedicated to local communities), to a public space brutally denied of any communal signification (except state-nationalist), and accaparated by power and profit interests, regardless of urbanistic, communal, or even patrimonial issues.

Zaikin Park is a green area with small houses surrounding a common park, a typical communal, village-like neighborhood within the Chişinău metropolitan area, which happens to be on the axis of an enormous boulevard, Dimitrie Cantemir. The latter was initially designed in the urbanistic plans of Chişinău before 1989, then was refashioned and approved in 2007, and again in 2012. Interestingly enough, for both orientations (state-socialist and neoliberal), the type of communal living specific to Zaikin Park had no value. However, such a communal livelihood, although devalued by both systems, remains in place and characterizes numerous other neighborhoods from Chişinău which challenge the traditional urban-rural divide, as well as the currently dominating value-system. Opposed to these overarching tendencies, the volunteers of Oberliht tried to both rehabilitate the area for communal use and to activate and develop a coalition with the local community. One of the most recent events developed in the Zaikin Park was the International Summer School “Architecture – Installations – Landscaping”, which took place between July 22-31 2016.
In parallel, the Kiosk/Open Apartment, itself a public space endangered by private construction and parking projects, hosted the series of Open Air Cinema, focused on issues such as the social life of narrow urban spaces (27 July 2016) or the history of urban planning of Chişinău (23 July 2016), in conjunction with site-specific works and interventions in public spaces of Chişinău realized thanks to the artists-in-residence program.

At its turn, the gallery Zpace, which is both a space for production, meetings, and exhibition, hosted in June 2016 a series of workshops of management for independent cultural centres, advocacy in the cultural sector and in the rural areas, as well as preparatory meetings with different actors of the local independent scene. Zpace has also come recently under pressures from the local authorities, which are attempting to reorganise and redistribute the space, regardless of its recent history and audience.

In consequence, in a Moldovan context characterized by an oligarchic rule established without democratic legitimacy yet with external as well as local private support, the stake of the 2016 edition of the Days of the Public Space is a move towards systemic changes with culture at its core, building on local knowledge of communal living and on the momentum of the local and international movement of reviving the urban commons. Some of the models considered compatible include the success of Croatia’s Clubture association in establishing the national-level Kultura nova public foundation for independent cultural organisations, from the resources of the National Lottery Fund, and Pogon, the Zagreb Centre for Independent Culture and Youth, a hybrid public institution, budgeted by the city council but working according to immanent principles.

The lack of democratic legitimacy of the current Moldovan authorities may become an advantage for this movement of “acting socially through culture”, for which the international support remains vital, even if the objectives of the Days of the Public Space would be only the first stepping stones for initiating a paradigm shift towards an alternative value-system and reconceiving Chişinău from the perspective of its commons.

Ovidiu Tichindeleanu
Ovidiu Tichindeleanu [1976] is a philosopher and culture theorist living in Chişinău and Cluj, writing on critical social theory, decolonial thought, alternative epistemologies, and the cultural history of postcommunism. He studied philosophy in Cluj, Strasbourg and Binghamton, New York and obtained a PhD in philosophy (Binghamton University) with a thesis on monolinguism, modern media and the archeology of knowledge at 1900. He publishes widely and is the author of various books.