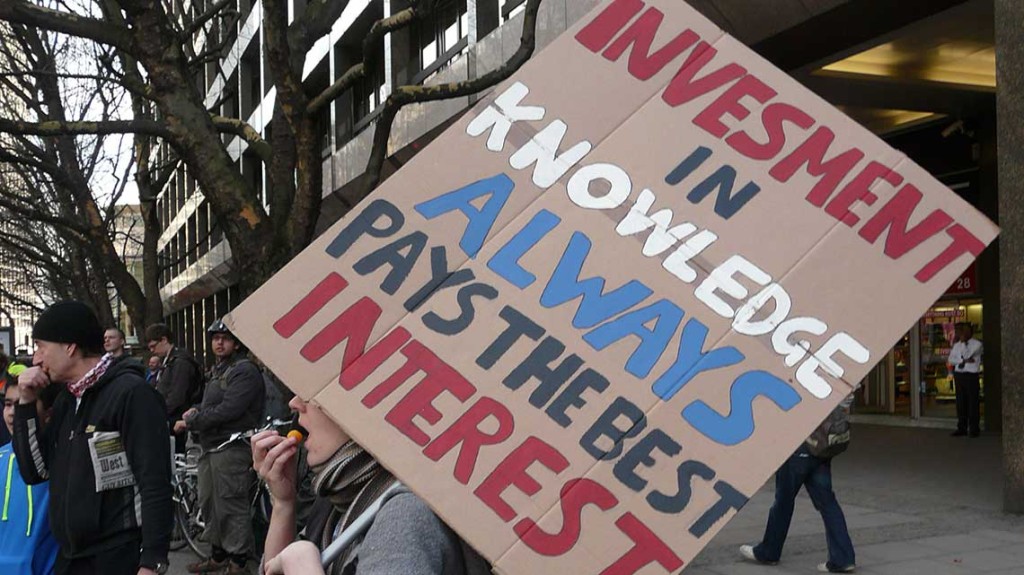 An accidental, uninformed passer-by strolling through central London on Thursday afternoon might have got the impression that the city was in the grips of a revolution. Thousands of people were out on the streets amidst a swarm of police, tents and metal barriers hurriedly erected in front of the Houses of Parliament.

In among this disarray, practically nobody and nothing escaped unscathed: students, policemen, casual bystanders, shop windows or London’s monuments. Even a princely couple and their luxury Rolls-Royce got their feathers ruffled. Yet London responded as if it was quite new to street demonstrations. The police keeping an eye on students around Parliament Square buzzed with anxiety rather than readiness. Instead of securing areas where the anger of protesters could be safely defused they launched into a confrontation with no direct provocation. And while the clashes resulted in around 35 wounded on both sides, the real victims on the day were not the police or protesters but British universities.

It all started when the Commons, thanks to a Conservative-led vote, approved government plans to hike university tuition fees. In the face of cuts of around 80% to public spending on higher education tuition fees are set to become the main source of income for universities. The old funding model will remain in place for all but a few academic subjects. Most courses (especially in humanities and arts) will be deprived of any public subsidy.

The Tories have thereby created a mechanism which, before long, will lead to the collapse of the British system of education. A group of people who got their higher education for free have now turned it into a luxury good for future generations. Access to education will become harder not only for the worst off but to almost everyone except a rich minority. In Britain academic scholarships are practically non-existent and tuition fees of up to £9,000 a year are beyond the reach of most. Admittedly, the current system of low interest loans will remain in place, but the prospect of racking up £30,000 in debt for a Bachelor’s degree is terrifying. A significant decline in the number of students will result, followed by inevitable university closures and the coming years promise to deepen the social inequality that is already the worst in Europe or simply lead to oligarchy.

In spite of the mass student protests which have recently swept through London the coalition government has refused to back down. The two main demonstrations brought in over 70,000 protesters. On Thursday another 20,000 voiced their objections, picketing next to Parliament on the day of the vote. Such a massive demonstration against the government’s actions hasn’t been seen in Britain since Thatcher’s reforms in the 1980s. David Cameron won the general election in May this year as a mainstay of rationalism that was to counteract 13 years of ideological Labour government. Steering clear of radicalism, he played the “moderate Tory” and “good man for bad times” that the UK needs right now. Widespread admiration for the new prime minister was additionally increased by the quickly and ably agreed coalition with the even more moderate and ‘unblemished’ Liberal Democrats. But it transpired very quickly that Cameron was not going to be, in any sense of the word, a moderate. Instead he seems to harbour the ambition of morphing into the new Iron Lady and is probably swelling with pride at the thought that the actions of his government have met with almost as much disapproval as Mrs Thatcher’s reforms.

The planned public spending cuts announced last October were a clear symptom of the strategy described by Naomi Klein in The Shock Doctrine. The Tories, summoning the spectre of record levels of public debt and whipping up the apocalyptic propaganda developed long before the election, began an ideologically motivated transformation of state structures disguised as rational caretaking – the only just solution to the ‘havoc’ of the financial crisis. It is a solution clearly aimed at dismantling the welfare state. It is symptomatic that the proposed swingeing cuts encompassing almost all spheres of life leaves spending on defence and troops only modestly touched. Or that one of the first decisions won in Parliament by Cameron, Nick Clegg and company after coming to power, was to lower corporation tax from 28% to 24%. Such a move is difficult to explain rationally, particularly in times when money is desperately short supply.

To replace existing frameworks of the welfare state the Conservatives are touting a fiction entitled the ‘Big Society’. The idea sounds pleasant enough: the spontaneous engagement and self-organisation of citizens in favour of the common improvement of general living conditions as a pathway to eternal happiness. It’s hard not to smile. Sadly when it comes to bringing this idea to life the Conservative party’s ideologists seem remarkably short of ideas.

Nevertheless, no one can deny that the coalition parties lack inventiveness in the other areas, especially in their bold interpretations of reality. Fortunately this time round nobody is claiming that ‘there is no such thing as society’, but other bold theses abound, such as the opinion, voiced by some conservative politicians, that students shouldering the massive debt of tuition fees will be more committed to their studies.

Clegg, the Liberal Democrat leader, has emerged from recent events an even bigger loser than the embattled British student. Like the rest of his party, he won his mandate on the back of strong opposition to tuition fees and their subsequent surrender to the Conservatives over this issue created one of the worst rifts in the Lib Dem’s recent history. 21 out of 56 Lib Dem MPs voted against the increase and 8 MPs abstained. Clegg, supporting the spending cuts, scored the worst own goal in his life. Like his counterpart in the Conservative party, he dreamed of greatness, but currently the loss of his job looms large, while opinion polls show the lowest approval for the party in its 25-year history. Meanwhile Cameron has written himself into the history of British politics in bold strokes and has taken a worthy seat among previous Conservative prime ministers, just next to Mrs Thatcher, with whom he appears unshakeably fixated.

Mrs Thatcher’s career ended when she was stripped of power in her own party by former colleagues, leaving her sipping tea with Pinochet on a living-room couch. I have no idea how things will end for Cameron – as long as they end as soon as possible.