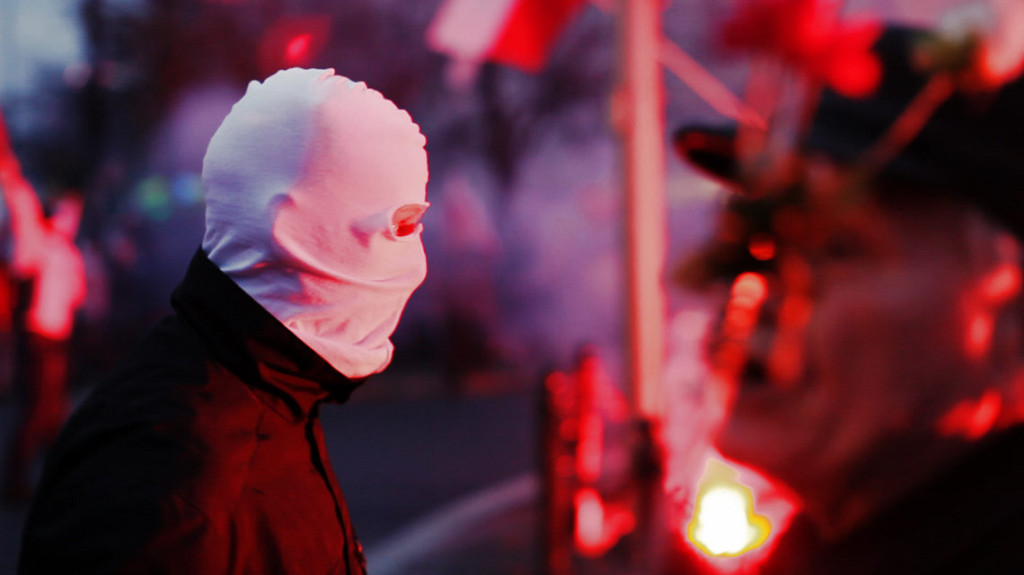 [dropcap]S[/dropcap]ince the end of the Communist regime, Poles have celebrated their Independence Day on November 11 to commemorate the establishment of the Polish Second Republic in 1918, at the end of the First World War. But many Poles now look toward the 100th anniversary anxiously. Under conservative governments, marches on November 11 have become expressions of national chauvinism and homophobia, punctuated by outbursts of violence.

In 2011 the “Independence March” in Warsaw was organized by right-wing radicals and backed by such major politicians as Jarosław Kaczyński, the former prime minister and leader of the parliamentary opposition. Even before its official start, the marchers, who numbered as many as 10,000, started fighting both the police and peaceful counter-demonstrators, who were rallying in the name of diversity and anti-fascism. Marchers belonging to such groups as All-Polish Youth and National-Radical Camp, who talked about “overthrowing the republic” and had previously carried “White Pride” and Neo-Nazi banners, attacked officers and set several cars on fire.

But most of the media described the clashes as violence committed by radicals on both the left and right. This “false symmetry” has plagued liberals and progressives for years.

Leaders of the Independence March made numerous appearances on national television to rebuke accusations of anti-Semitism and racism and to blame all violence on a “leftist conspiracy” or “police provocation.” But the violence continued. In Bialystok, an Indian-Polish couple’s apartment was set on fire; so was a Muslim-owned store in Gdansk. At a squatters’ apartment in Wroclaw, right-wingers wielding axes and clubs sent one man to the hospital with a fractured skull and ribs. The same day, on semi-official websites, the perpetrators joked about what they had done, congratulating each other on their “efficient action.”

This year was supposed to be different. The right-wing nationalists declared that their annual march was not to be disturbed, and the rest of the public complied. The left chose a different date for its anti-fascism parade, and the president of Poland, Bronisław Komorowski, chose a third day to lead his own march. As a result, on November 11 in Warsaw, the streets belonged to the nationalists alone.

What occurred was even more disastrous than the march in 2011. “The Rainbow”—a popular outdoor symbol of the LGBT movement in an area buzzing with hip cafes and bars—was burned.

The Russian embassy was attacked; its security checkpoint was torched while a few marchers tried to invade the embassy grounds, hurling firecrackers and stones. A few dozen others separated themselves from the main column of the march and, in what seemed part of a plan, set fire to two squatter apartments, which housed immigrant families, including children.

The worst result of these marches may not have been the violence. The conservative ruling party, Civic Platform, which sees the far right as a threat to its rule, has begun using the conflict to restrict the public sphere. Against the street violence of the far right, the party wants to promote its platform of neoliberalism and moral conservatism as the proper, “Western” way of doing politics. It wants to tighten existing laws and pass others that could be used to suppress nonviolent protests in the future. A proposal by President Komorowski would give the police excessive new powers, enable the authorities to stop legal protests, and make it illegal for protesters to cover their faces. Other ideas circulating in parliament would outlaw All-Polish Youth and the National-Radical Camp, which can only increase the likelihood that these groups will resort to violence.

Some legal scholars, such as the renowned criminologist Monika Płatek, have spoken out against these new measures. “We do have a constitution and we have to enforce the law that is written in the constitution,” she said on a popular radio show.

Writing more restrictive laws while not respecting constitutional limits, she points out, is more characteristic of totalitarian states than democracies.

But her voice represents a minority position, and experienced politicians like Prime Minister Donald Tusk know that fear and anxiety can be channeled into support for a more repressive state.

In democracies, governments and ruling parties can change. What happens if the state—armed with new powers that allow it to suppress demonstrations more easily and carry out surveillance more thoroughly—is ruled not by those who clumsily defend democracy against their opponents but by those who want to overthrow the republic? What’s proposed now in the name of fighting fascists in the streets can be deployed tomorrow to fight unions and stop anti-government demonstrations by the left, or anyone else.

Most of the middle-class Poles who support Civic Platform would like to get rid of all “radicals,” whatever ideology they profess. But such “false symmetry” is a threat not just to the freedom of action of right-wing nationalists and white supremacists but also of those who dare oppose them.

Originally published in “Dissent” A Quarterly of Politics and Culture on Dec. 3rd.