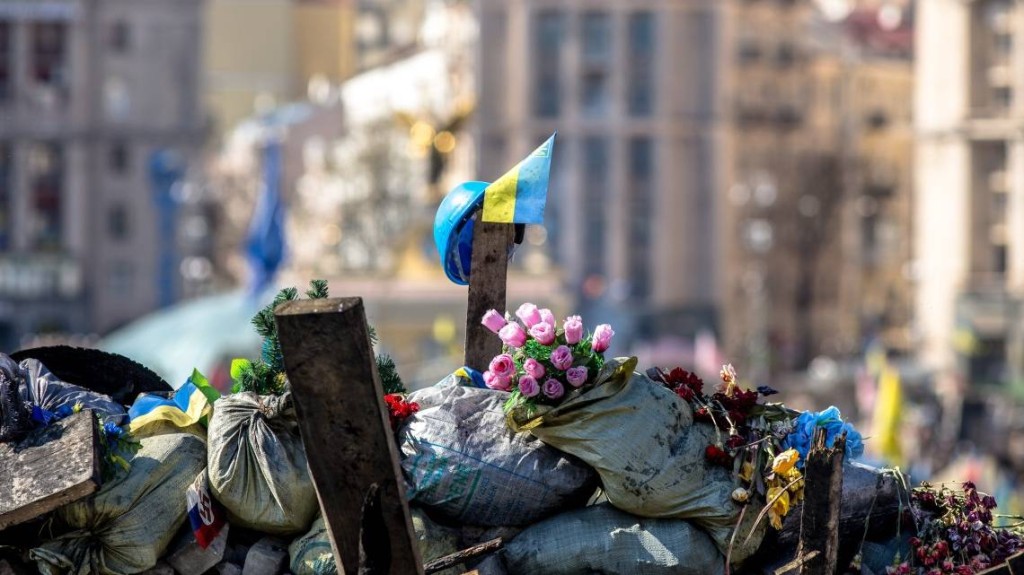 [dropcap]U[/dropcap]ntil late Monday (December 9th) night militia units were pushing with shields people blocking government buildings. The demonstrators were directed towards their original camp on the Independence Square and Khreshchatyk Street. One of the protesting groups sprayed gas towards the officers but violence did not escalate.

The largest demonstration since the Orange Revolution

Each Sunday of protests breaks a new record. Also on December 8th many more people arrived than a week earlier. There are no precise estimates ‒ militia saw a hundred thousand people while some media a million. In this case the truth isn’t probably in the middle and is closer to the higher figure. Ukrainians, despite all doubts, didn’t get bored with going out on the streets and are still ready to fight for their rights.

It was during that several hundred thousand strong demonstration one of the politicians of the opposition Batkivshchyna, Oleksandr Turchynov, called the participants to spread to key sites of Kyiv and building barricades there that would thwart functioning of the regime. “We’re going in small groups: thirty-fifty thousand each” ‒ said Turchynov. The demonstrators did scatter around the city, although in not such big groups, and in selected spots erected barricades similar to those seen on the Independence Square. Built of metal fences, wooden logs and sometimes of barbed wire they were not as resilient as the first structures from Maidan. Militia was cordoning off people, then pushing them away and, in the end, dismantling the barrier. The most distant were dealt with first ‒ those in front of the Cabinet and Presidential Administration buildings.

Opponents of the current government weren’t the only ones present on the streets on December 8th, there were also supporters. There was yet another event organized in the Supreme Council [the Parliament]in support of Viktor Yanukovych. Additionally there were demands for “liberation” of the capital. ‒ I myself am from Kyiv and I don’t like that people who are not from here took over our city council ‒ said an entrepreneur and citizen of Kyiv Oleksandr, one of participants of the demonstration.

Up till now you’d be hard pressed to find a citizen of the capital on demonstrations organized by the government. Now, suddenly, everyone I’ve spoken with introduced themselves as living in Kyiv.

The event, organized by Party of Regions, looked much more numerous than it was in reality. Three or four rows of demonstrators were positioned next to a temporary fence, facing Mariinsky park. Behind them however there were only a few tents and several dozens of people. More gathered in front of a stage where various pop bands performed and in spots were food was distributed and one could warm up. The demonstration was less than 1500 people although from outside it could appear to be several thousand.

As Oleksandr puts it he is not supporting the opposition as their demands are extremely radical, nationalistic and separatist. He is not opposing integration with the European Union, but isn’t supporting European values ‒ I don’t want my kids to be taught at school that it’s fine to have two dads or two mothers. These aren’t Christian values ‒ he adds. He also emphasizes that integration with EU should be based on partnership principals, which isn’t the case now.

When one of the Ukrainian TV channels showed falling Lenin for the first time, everyone at the bar started shouting as if Ukraine had won the World Cup. Passersby on the street spoke only about that. Around the plinth, which until recently supported Vladimir Ilyich, there was a feeling of triumph. ‒ I feel that the lifelong dream of Ukrainian patriots has finally came to be: to get rid of him from our land ‒ says Yuri, an architect.

Pulled down with ropes the statue partially broke when it hit the ground. Nationalists decided however to have it chiselled so that no one would have the idea of rebuilding it. It was destroyed and its pieces became attractive souvenirs.

‒ We are well aware that the Spanish have protected their Franco. We would like to let European nations know that Ukrainians are tolerant, we wouldn’t like to destroy monuments, but this Lenin is a thousand times worse than Franco ‒ says Yuri.

What instead of Lenin? No one knows. Mykhailo Dobkin, former mayor of Kharkiv, where Lenin monument stands on the main city square, already offered to give a hundred thousand hryvnia for building a new one. Demonstrators have a different view. Yuri for instance proposes to build a freedom monument. In the end ‒ he says ‒ it’s the first symbol of the victory of the Ukrainian revolution.

A barricade on the Hrushevskyi Street

It was a short time between the call during the protest and creation of the first barricades. In front of many important government buildings tents were build, concrete flowerbeds were moved, temporary barricades were erected. In one spot the demonstrators surrounded a crossing with barbed wire.

On the night of 8th to 9th of December the blockade in front of the government building was scarce. You could see the tiredness. Even drummers were slow to hit barrels with metal poles. After some time from the direction of the European Square one could hear shouts: “Glory to Ukraine ‒ Glory to heroes!”. It turned out to be a change of the guard, more numerous and rested. One could once again hear the metallic sound of drum beating.

Demonstrators exchanged every four hours but there were some who stood several shifts. Nationalists in majority but not exclusively.

I approach one of a few girls. Ira has finished college. ‒ I stand here because I want Ukraine to be free, I want to live in Europe ‒ she says. She believes it’s a chance for her own development as well as that of her children and the whole country. ‒ I’m a little worried if there will be violence, but I think that the government aren’t that bestial, to shed our blood once again ‒ she says with assurance.

A day later all the blockades were removed by militia. Some where pushing the demonstrators, while others were dismantling the barricades. Too small and distant positions were unable to deal with militia units. Now life of the demonstrators is once again on Maidan and Khreshchatyk. The buildings occupied there, tent town and welded barricades won’t be as easy to remove.

The temporary failure of the demonstrators rather didn’t cool down the moods. For the time using force or threatening force only mobilized them.