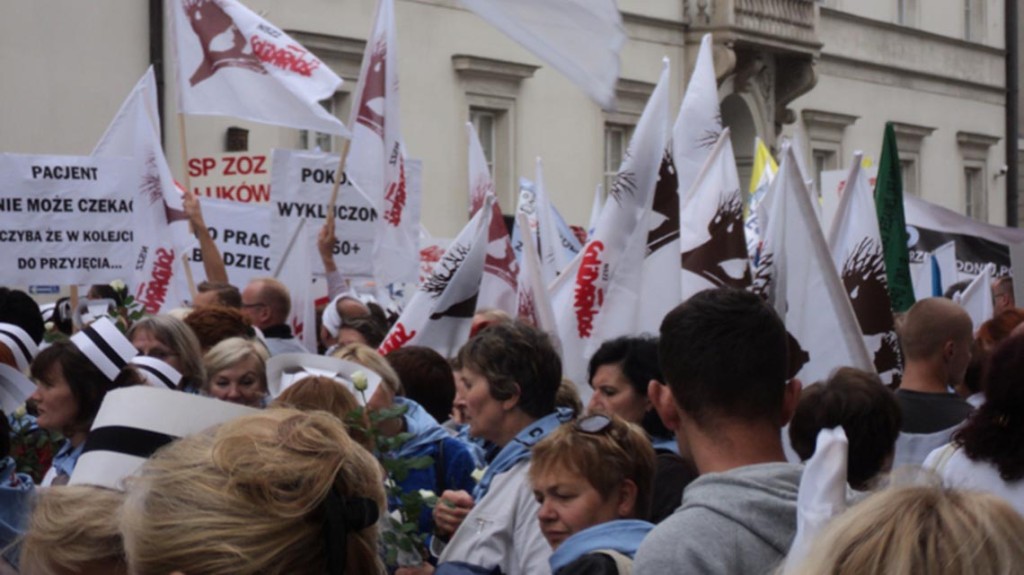 [dropcap]I[/dropcap]n September Poland went on strike. In many other countries struck by economic hardships and severe austerity measures, a mass strike would be no news at all. But in a country where media relentlessly reiterate the dogma that the general public is “passive” and there are no unions “worth reasoning with,” this is news indeed.

Starting September 11, a wide coalition of unions (among which the All-Poland Alliance of Trade Unions and Solidarity are only the most renowned), anarchists, social movements, and people disillusioned with center-right government of Prime Minister Donald Tusk took over Warsaw. Demonstrations and protest rallies lasted for four consecutive days and, for many—thanks to the mass scale and omnipresent white-and-red banner of Solidarity—prompted the memory of the original Solidarity of the 1980s, the movement largely responsible for the decomposition of the socialist system. However inspiring this analogy might sound, it turns out to be dangerous, too. Those protesting today are not fighting against any impersonal evil “system” but tangible shortcomings of neoliberal policies implemented in the face of ongoing crisis.

It is the economic agenda of Prime Minister Tusk and his Civic Platform (PO) government—the first one in the twenty-four-year history of the Third Polish Republic to serve a full term and be reelected—that causes concern among the unions and working people of Poland. Despite the fact that the worldwide economic crisis left the Polish economy relatively unharmed—in fact, there was a time when Poland was the only EU member-state with a growing GDP, which led politicians to boast about Poland being a “Green Island”—there are growing numbers of people experiencing the hopelessness of precarious jobs and short-term contracts, a status only slightly better than unemployment. Which, by the way, is also soaring—especially among young, college-educated people. Tusk’s government’s ways of resolving these problems are precisely the opposite of what most people—backed by plenty of economists, journalists, and intellectuals—feel should be done.

In recent months Poles witnessed the raising of the retirement age to sixty-seven years (it used to be sixty-five for men and sixty for women), the elimination of the eight-hour workday, and the restructuring of privately owned pension funds—all in the name of bringing competitiveness and elasticity to the local economy. Or rather for the purpose of challenging the deficit and bringing short-term balance to the debt-to-GDP ratio, as the critics contend. It is these neoliberal policies that provoked general outrage and the biggest protests in years.

The protesters’ list of demands wasn’t long: raise the minimum wage, withdraw the retirement age reform, and put an end to “flex-time” labor and short-term contracts. Only their last demand—for Tusk to step down—may be regarded as exaggerated or unattainable. But for the majority of the media and the wealthy elite in Poland, the unions and protesters aren’t partners to begin with. Regardless of the accuracy of their demands and the popular support they enjoy, they are described as, at best, populists and demagogues. Words like “rioters” and “hooligans” are used frequently too. The “mob” is simply not “reasonable enough” to be treated seriously.

This has led the media to draw the comparison between protesters today and the Solidarity movement of the 1980s. And, unfortunately—not only for the unions, but for the prospect of social change in Poland in general—this comparison is never favorable toward those who demand their rights here and now.

The usual narrative about recent protests goes something like this: The original Solidarity fought with a system that was built on a lie. It was based on wide popular support and its members and supporters endured beatings and all other possible forms of state oppression, including imprisonment. Today’s protesters fight fair and modern realities of liberal capitalism. They are led by a group of union bosses, well paid and secluded from the everyday reality of the workers whom they claim to represent. They capitalize on anti-modernist, popular resentment that stands in the way of progressive reforms that could transform Poland into a truly Western democracy.

One of the most striking examples of that rhetoric is an article, published even before the protests actually took place, entitled “Two ‘Solidarities’” (“Dwie ‘Solidarności’”). In that piece, printed by the liberal Gazeta Wyborcza—once sympathetic toward unions, since it was founded by the leaders of anti-communist opposition closely linked to the Solidarity back in the day—Jarosław Kurski writes that he’s “ashamed” by what passes under the name of a union today. Kurski writes:

Those statements are not only false—protesters do have popular support, harsh economic realities are anything but fair, and this government lied numerous times, contradicting almost all its promises made during the few past years—but pose a demand that cannot be fulfilled: that every new protest, every new social movement, be a new Solidarity. This is simply not possible—and both the media and politicians are well aware of that—but nevertheless it confines the protesters to the shadows of “the original” Solidarity. This, in the eyes of many, makes them look less serious, less popular, less representative of the working class as a whole, regardless of how many people gather on Warsaw streets. It’s no surprise that this tactic works: reality is bound to lose when compared with the legend. Unions are—as Maciej Gdula from Krytyka Polityczna (Political Critique) observed—blackmailed by the myth, engaged in a game they cannot possibly win.

But this conviction that the original Solidarity was the first and only popular movement with social legitimacy—a conviction already regarded as an empty utterance by all but ultra-liberal business circles and some of the media—is doomed to failure. Not because there is a radical change coming anytime soon, but rather because it doesn’t reflect the actual state of affairs. Today’s unions in Poland cannot be the original Solidarity, but they operate within their constitutional rights and express the concerns of not only the industrial workers—as many think—but the precariat, young professionals, unemployed, and pensioners. Those who state that the Warsaw protests don’t represent anyone’s interests but the union leaders couldn’t be further from the truth.

The second most popular accusation against the unions, that they don’t act “rationally,” isn’t accurate either. Contrary to what their opponents say, protesters do have a coherent program. There are experts and economists willing to back their cause; it’s not the empty anger of a “mob that displays a radically demanding attitude” and wants to abolish the enlightened and liberal government. Nor is there violence among the demonstrators. Those scares are long gone; they’ve lost their appeal, especially since a couple of years ago when there actually were movements enticed by violence, channeling popular anger into a nationalistic and anti-EU frenzy. What Warsaw is witnessing today is a form of populism that is equally suited for the street and for academic debate. The government simply doesn’t want to recognize the civil and even moderate character of the strikes.

The media’s take on social movements (or the lack thereof) in Poland used to be that the general public is “passive” and “disengaged,” and that no mass demonstration was possible because there’s no “civil society” in Poland. In the wake of protests counting as many as 100,000 people in Warsaw alone, nobody dares to indulge in such nonsense anymore. Those who want to discourage people from supporting the strikes turned to the very opposite notion: that there’s an established Western-style and liberal society in Poland, but those who gathered for a couple windy days in September to express their disagreement with Tusk’s policies aren’t representative of that society. That these people don’t have the legitimacy, that they lack expertise, that they operate unlawfully. How ironic is that, given the fact that the first Solidarity was defamed by state-run propaganda in words not very different from those?

This new view won’t last for long now, either. In the end, the comparison between today’s protests and the past relies on a myth—and one that is mostly cultivated among the elites. For those at the bottom, it’s the reality that matters.

Originally published in “Dissent – A Quarterly of Politics and Culture” on Oct. 10th.