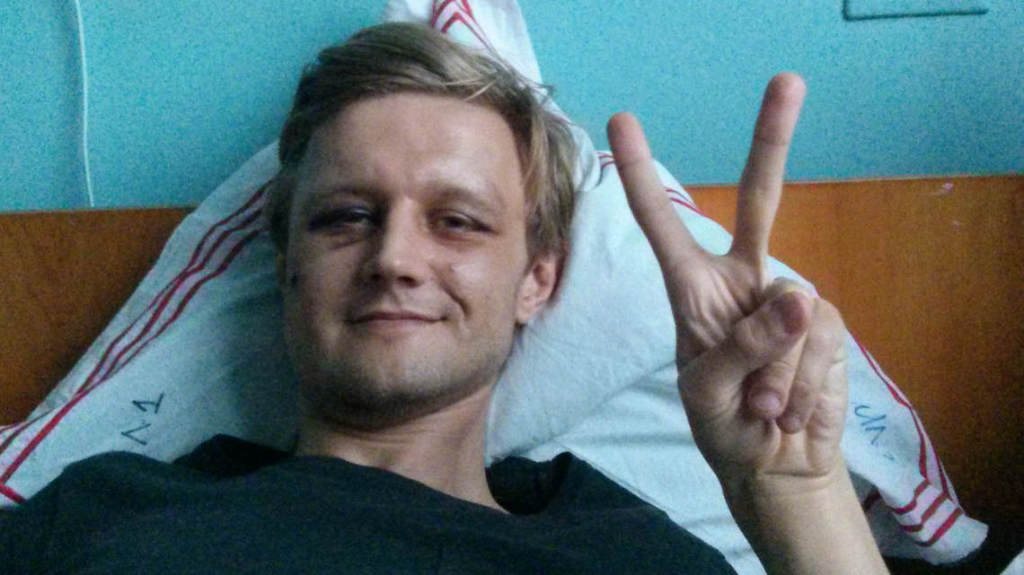 [dropcap]On[/dropcap] September 23rd Vasyl Cherepanyn, the head editor of Ukrainian edition of Political Critique, doctor of Humanities, and lecturer at the National University of Kyiv-Mohyla Academy, head of Visual Culture Research Center, was beaten up in Kyiv by unknown culprits wearing uniforms.

Agnieszka Wiśniewska: How are you feeling?

Vasyl Cherepanyn: I’m finally home after leaving the hospital. Nothing hurts me now. On Wednesday I had a face surgery, I have a few broken bones: a cheekbone in three places and the maxillary sinus. Some were reconstructed surgically, others have to grow together on their own. Now I’m a real “Cherepanyn” [cherep meaning skull in East Slavic languages], with a broken skull (laughing).

What actually happened on Tuesday?

I was walking from the side of Kyiv-Mohyla Academy, where I work, to the metro station at Kontraktova Square in downtown Kyiv, with Yustyna [Kravchuk, of Ukrainian “Political Critique”]. I was attacked from behind. They were shouting: ‘Separatist! Communist!’. Right away I was struck in the head so hard that I fell to the ground. I was kicked. I don’t know how I’ve managed to get up and run as I was already quite stunned. The assailants ran after me. They started shouting first: ‘Stop the separatist!’, and then: ‘Stop the thief!’ so that people would help to catch me. It was a bit like safari, I fled from them onto a street between cars. They caught up with me almost opposite the university and then knocked me down. I think there were seven of them. They’ve broken my face bones kicking me in the head with military boots.

Do you know who they were? Ukrainians? Russians?

Ukrainian neo-Nazis, some of them “patrol” Kyiv. Those who attacked me were wearing military uniforms but new ones as if straight from a store. Real soldiers wouldn’t look like that and wouldn’t do anything like that.

They are using words that might legitimize them and stygmatize their enemy. In the time of war it’s always the easiest to accuse an opponent of collaborating with the foe. Two years ago they were shouting at me that I’m “LGBT” and that I’m “promoting gender”… and now I’m a “separatist” to them.

Did anyone react to the attack?

[quote align=’right’]In the time of war it’s always the easiest to accuse an opponent of collaborating with the foe.[/quote] Many people have written, and still are writing to me, offering help. It’s very nice and important. Plenty of domestic and international media published information about this incident. Serhiy Kvit, the current Minister of Education in Yatsenyuk government and the rector of Kyiv-Mohyla Academy before that, publicly called for the Internal Affairs Minister Arsen Avakov to take care of the matter. It’s not impossible for the police to hide the culprits perhaps partly connected with one of the Kyiv battalions, to which neo-fascist paramilitaries also signed up – hooligans, football mobs, radical nationalists once linked to Svoboda party (for instance the C14 initiative) but today that party is distancing itself from them. After Maidan they’ve organized their headquarters next to the University in the offices of the Communist Party of Ukraine. Perhaps they’re still there.

How long will you receive treatment after the hospital?

At least a week or two. They will take out stitches on my face in some days and then I will continue ambulatory treatment.