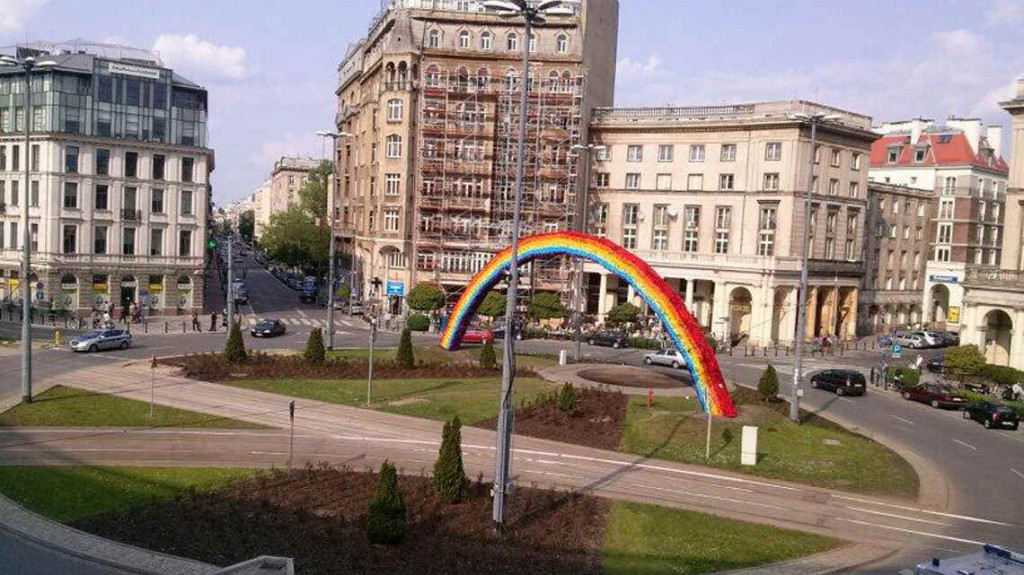 [dropcap]T[/dropcap]he current Minister of Culture is about to be succeeded by a new one. This change at the ministerial office is a welcome moment to ask what culture do we need and answer in favor of a culture that’s inclusive, a culture that creates bonds, on a local level and in touch with people.

This year, European Cultural Foundation conferred its Princess Magriet Awards on Teodor Celakoski from Zagreb, and Teatro Valle Occupato from Rome. The former animates protests against privatization of public space, the latter occupy a theatre building.

The ceremony of presenting the awards took place in March, in Brussels. In an elegant interior and with pomp and circumstance, with solemnity of a religious service. As the representatives of Teatro Valle were accepting the award, a real-time broadcast from the occupied theatre, where the rest of the squatters-employees celebrated the occasion, was being streamed to a large screen and watched by monarchs and EU officials. Now, imagine Poland’s minister of culture giving an award to participants of a social protest.

On a local, next-door-neighbor level, culture has become a language for describing reality, for making historical past familiar, for exploring one’s surroundings. Art has entered public space not merely as decoration but as commentary, inspiring dialogue and reflection on the role of that space, as was the case of Joanna Rajkowska’s Oxygenator, or as a form of warfare, best instantiated in Julita Wójcik’s Rainbow, repeatedly burned by homophobic and nationalist hooligans and renovated by volunteers. Artists meet sociologists, anthropologists, historians. This is not limited to Warsaw: in Ostrowiec Świętokrzyski, town with some 70,000 inhabitants, cultural activists made an exhibition reminding people about a workers’ colony founded in the city nearly a hundred years ago. They consulted historians and worked with tools used in recording oral history. The exhibition was staged in the middle of the town square.

[quote align=’left’]This is the kind of culture we need: made in touch with people, in collaboration with them, together; accessible to as many as possible.[/quote]Only half a year earlier the very same activists initiated a debate on the renovated town square. Some time before, the authorities had gone to considerable lengths to have the square paved with granite, having forgotten to include in their scheme the needs of the locals. The square was turned into a granite desert. The activists reacted: they succeeded in calling an open debate with the mayor where ideas to reclaim the town square for people were presented. One was to turn the square into a place that welcomes culture, meaning not an occasional concert by a celebrity star from Warsaw, as is often the case in provincial towns, but actions that are not as much “aimed at” the public as they are performed “in collaboration with” them.

For some reason, at school we are taught quite a lot about history of Poland, they treat us to more than a handful of the world history, while little space is left to tales about our own neighborhood. We end up knowing more about columns in ancient Greece than about our local town hall. It is simpler with large cities: Gdańsk’s is the history of Solidarity, Wrocław had the Orange Alternative, Warsaw is all about its 1944 uprising. It is around those historical events and facts and narratives about them that a community is built. We have founded our national community on the tales of heroic struggles. What about local communities, how do we go about building them? An answer is offered by those who have not left their hometowns for larger cities sometimes to leave the larger cities for Warsaw; by those who invite to their hometowns artists and cultural activists from other places.

The most thrilling phenomena in culture in recent years happen in the key sphere where culture is no longer made for an audience but is instead more often perceived as doing something with the audience as participants. This is where the practice of cultural activists meets that of social activists. It suddenly occurs that both groups seek areas and modes that welcome collaboration. They create spaces where going together is more important than the success of an individual. The line between activities that are clearly artistic and those that are clearly social is fading away.

What about instances of cultural actions, new models of operating cultural institutions, where the viewer is a an active participant, not merely a consumer of a finished work, have we got any? Łaźnia Nowa Theatre, at the Nowa Huta post-industrial district of Cracow, invites people to paratheatrical meetings that deal with important social issues. Praska Biblioteka Sąsiedzka (Praga Neighborhood Library) in Warsaw is a place where the locals come not only to discuss books, but also to meet and socialize.

The employees of Teatro Valle, wanting to prevent privatization of their facility, started to occupy it. They subsequently opened the space to the public, turning it into a squat, initiating artistic and social activity founded on new principles of collaboration between the theatre people and spectators. The theatre has ceased to be a place which you frequent all dressed up, accessible only to the chosen few. It has become a common space.

This kind of theatre – not only for the elites – was fought for, on more than one occasion, by activists from Kalisz, in central Poland, who would combat against an absurd price policy of the Kalisz Theatre Meetings. When the director of the local theatre (former director, I am happy to say) said in 2013 that one can sacrifice one’s winter holidays for theatre, on the opening day of the festival, some of the spectators showed up wearing goggles, skis and skiing poles in their hands. Those people were actually the former patrons of the event who had to quit going to the KTM, confronted with exorbitant prices charged by the management. Tickets for some of the guest performances sold for what would approximate the total cost of going to another city and watching the thing on its original stage. Who were the ideal addressees of the KTM, then? It would seem, they were the very people who could afford winter holidays. The protesters quoted Sebastian Majewski of the Stary Teatr:

Theatre is not for the elites. Theatre is for everyone.

Sadly, it is still more popular to consider culture as a commodity, with a price tag attached. As long as people are willing to pay the price and buy an expensive ticket in Kalisz or anywhere else, the management will not see any reason for making it more affordable. The stage is ruled by laws of the market.

But even from a purely economic point of view, the prevalence of this mindset is pernicious enough, as it excludes from civilization a good portion of society, denying them cultural skills, which are crucial in raising a country’s GDP.

Little by little, the debate on culture is approaching the parallel debate on the concept of commons. Culture is like public transportation: everyone should be entitled to it, with no car owners privileged over the users of buses and trams.

The ever more audible discussions on the city and public space in Poland, on commons in Europe, have set in motion a reconfiguration of the ways we think. We have started to ask ourselves questions like for whom the city really is: for those who can afford it or for all inhabitants? Is it parks and spaces to be used by all, that we need more, or is it parking lots? Are we going to let the business of privatizing entire swathes of our cities, only to be turned into shopping malls, go unpunished? Have streets and plazas with nothing but banks all over them anything to do with spaces for human beings?

Go wherever you like in Europe, and talk to activists and art workers, there’ll always be someone talking about commons, goods understood as common, accessible property: both physical goods, as public space, and virtual ones. Artists initiate social debates with their works, activists resort to tools traditionally associated with artists. This is what big European institutions are interested in. They perceive the artists-social activists as partners. This is the kind of culture we need: made in touch with people, in collaboration with them, together; accessible to as many as possible.

Culture as a social glue

Culture is not there to pay, to bring profit, not in the sense in which making business has to bring profit. Culture counts in a different way. It is its role in creating a community, in narrating the world, in establishing relationships that matters.

In a world where individualism has killed cooperation and the faculty for being together, where cooperation sucks and self-reliance seems so cool, we are smoothly and consistently dismantling all social ties. Why am I supposed to do something with my neighbors? I’d rather do it alone.

[quote align=’left’]Culture is not there to pay, to bring profit, not in the sense in which making business has to bring profit. [/quote]I am writing this at a house of my cousin, who has small children. In his backyard, there is a trampoline, a large one, fitted with a mesh enclosure, for safety. I can see an identical one roughly a meter away, in neighbors’ backyard, and another one, a little farther off, at the neighbors’ neighbors. Each child is jumping on its own trampoline. Will those children like to do anything together in the future? Why won’t their parents get together and buy one trampoline to be used by all? Would they be able to agree over whose backyard should have the trampoline and how to split responsibility of taking care of it between them? Or, rather, no one would like to keep the thing, in case a child should get hurt and whose blame it would be? This is the kind of society we are building: lonely children on their trampolines. And but few children at that. Most will be able to just watch from behind the fence.

Cultural initiatives that challenge this extremely individualized world model are worth closer attention, as they help us reestablish social ties and our trust in others.

There are enough large festivals in large cities. At such festivals, we can be no more than spectators, whilst what we need are actions that offer the opportunity to participate. Let’s not fool ourselves: for this kind of culture to happen, state assistance is needed. At this junction, one cannot but take issue with J.F. Kennedy’s “Ask not what your country can do for you – ask what you can do for your country.” Cultural activists have taken the first step: they have done something for their country; now is the time for the country to respond: offer support, recognition, means. Subsidizing activities is not enough: though essential, it is limited to sustaining individual projects over the period from June through December, with security and long-term planning being out of the question. Local, common cultural endeavors have to be taken seriously. They deserve it.