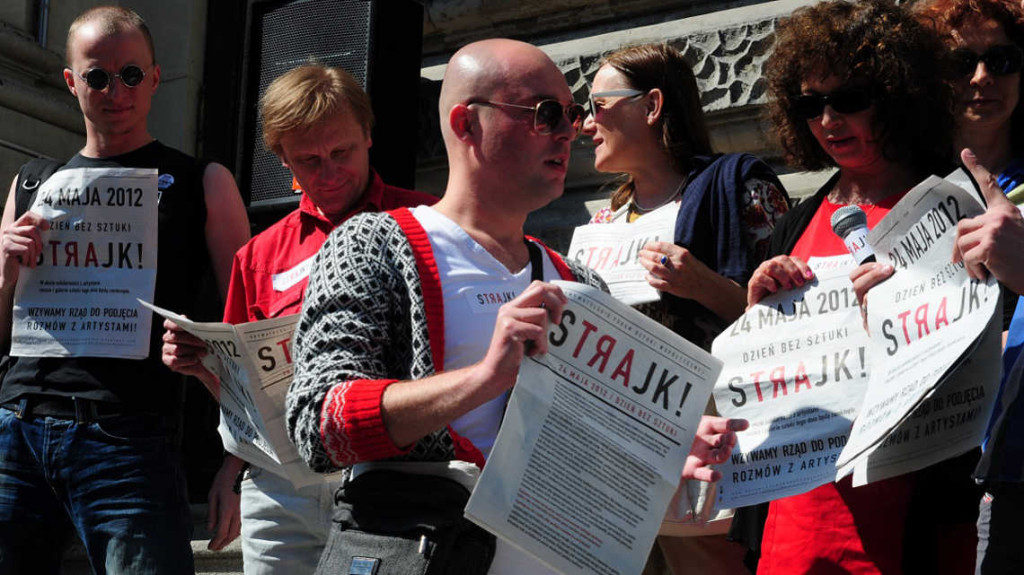 Jakub Majmurek: The government promises the gradual inclusion of all civil-law contracts (i. e.: for all the work which is not done under the employment contracts), into the Polish social insurance payment plans. How do the community of visual artists assess that proposal?

Katarzyna Górna: The government’s proposal is unacceptable to us. According to it, artists will be obliged to pay, in addition to income tax, 20% of their honorarium in social insurance and pension contributions. This would be grossly unfair, especially for visual artists and writers. Our income, which comes for example from participating in exhibitions, is one of the lowest, and is very irregular. At times we only sign two contracts for specific work per year. Including these contracts in state-run retirement plans in such a way is absurd, particularly because the artists would still be excluded from health care and disability benefits. The fee would contribute solely to their hypothetical retirement fund, and considering the income level in the cultural sector, the majority of artists does not stand a chance to save enough even for the lowest pension. This means they would end up needing social welfare or ministerial benefits anyway. Artists and art workers who have not held regular posts in cultural institutions since 2012 are appealing to the government for a scheme that would facilitate their inclusion in the public health care and social security system. The resolutions of the European Parliament promote such solutions. Poland is one of few countries to ignore these issues.

How can an artist pay their insurance fees today?

I could set up a private enterprise, and follow the same regulations as small businesses do. Alternatively, I could apply to a commission in the Ministry of Culture, which may grant me a retirement benefit. They would determine whether I am a qualified artist on the basis of my work. Then I could pay the insurance and retirement fees myself. I would still have to abide by the same regulations, and contribute the same amounts as a small business does, which is over a thousand zloty [or 240€] every month. Moreover, the commission determines the time when one’s creative enterprise began, and requires the payment of overdue fees from that moment onwards, which is often impossible.

In 2012, the Citizens’ Forum of Modern Art organized an artists’ strike, which was supposed to inform public opinion, and most importantly the authorities responsible for Polish culture, that we are not included in any social security system. Most artists have not paid their social insurance contributions for over two decades, and as senior citizens they will become social welfare beneficiaries. After the strike, we held a meeting with the Minister, and we agreed to come up with new solutions together. We presented our project. Now, we’re being ignored; the minister still has not found the time to get acquainted with our proposals, and now we hear that he is not going to defend the artists.

What does the Forum propose?

The propositions are very simple: we would like to create a system which allows for the specific character of creative work, for instance the irregular earnings, and the artists’ income levels.

What does that mean, specifically regarding the insurance fee collection system?

We wanted to discuss that with the government in order to create a joint project in accordance with Polish law. Such systems already exist in EU member countries, including the new ones, like Slovenia and most recently Lithuania. We consider the French and German systems to be model solutions to this problem. We believe that a system adapted to the situation of Polish creators can be built by the joint effort of the creative community and government officials. Not only can it be built: it needs to be built.

How does it work in France?

There is a system of social coverage funds for the artists, one with a multi-tiered qualification. For instance, artists who can prove that they earn a particular minimum sum by creating their work are entitled to membership in a fund. There are other criteria, though. A number of possible situations are described, covering the specifics of various creative professions: theatrical, dance, literary and visual. If an artist receives an income, they contribute a fee to the fund. And even if someone signs just one contract a year, they are not excluded from the social security system; they retain access to health care, and the right to unemployment and paternity benefits. Clearly, the artists contribute to the fund themselves (in proportion to their earnings), but the state plays a crucial role by also financing the system.

Is it possible to build a similar system in Poland?

I don’t think that we would manage to achieve so much. The increased cultural expenditure in Poland does not reach the artists at all. The money goes to large institutions and to event planning instead of honorariums which would allow the artists to pay the bills and to lead normal lives. The financing of the exhibition British British Polish Polish in CSW [Centrum Sztuki Współczesnej, Center for Contemporary Art Ujazdowski Castle in Warsaw – translator’s note] is a prime example: it cost over a million zloty, out of which the artists have not received a penny.

At the same time, the Tax Office is changing its approach to artists running their own businesses. The Ministry of Finance claims that copyright, royalties and similar sources of revenue can’t be accounted in the same way as incomes of a private enterprise anymore.

This is another outburst of bureaucratic idiocy. When the Citizens’ Forum of Modern Art talks about the problems of artists, the ministry’s comeback is: go register as a business owner.

Well, now it turns out that you can’t do that. Or you can, but what is the point if you won’t be able to pay your taxes for any artistic activity?

How many artists, according to your knowledge, did indeed choose to establish their own business?

We don’t know. For years we have been asking for some sort of survey to determine how many artists there are in Poland, what their financial status is, how they are participating in the social security system… I would really like to work with some hard data, but no one in Poland has any.

What are you planning next?

The burning issue at the moment is to block the solutions currently proposed by the government pertaining to the taxation of contracts for specific work. We ask, or rather we demand, an immediate start on developing new solutions, ones that take into account the specificity of an artist’s work. We need to create a team of government representatives from the Ministry of Labor and Social Policy, the Ministry of Finance and the Ministry of Culture, as well as delegates of the artists’ community, and get to work on solutions that would not deny the artists access to their basic rights. Unless, of course, the Polish government is trying to get rid of all artists.

The Citizens’ Forum of Modern Art – an association of  artists who act to better the social and legal conditions of creators in Poland. Established in 2011. Among other activities, it coordinated the artists’ strike in May 2012. Recently, the Forum has negotiated an agreement with exhibition venues in Poland, which obliges the venues to pay royalties to artists for their participation in exhibitions.

Translated by Aleksandra Paszkowska, photo by Joanna Kinowska The Citizens’ Forum of Modern Art. Interview was published on “Dziennik Opinii”  on March 5th

Katarzyna Górna
Visual artist. In the years 1989-1994, she studied at the Faculty of Sculpture of the Academy of Fine Arts in Warsaw in the work group of Prof. Grzegorz Kowalski. Contributor to Political Critique since 2009. Leader of the Citizens’ Forum of Modern Art since its conception in 2011.
> see other articles <