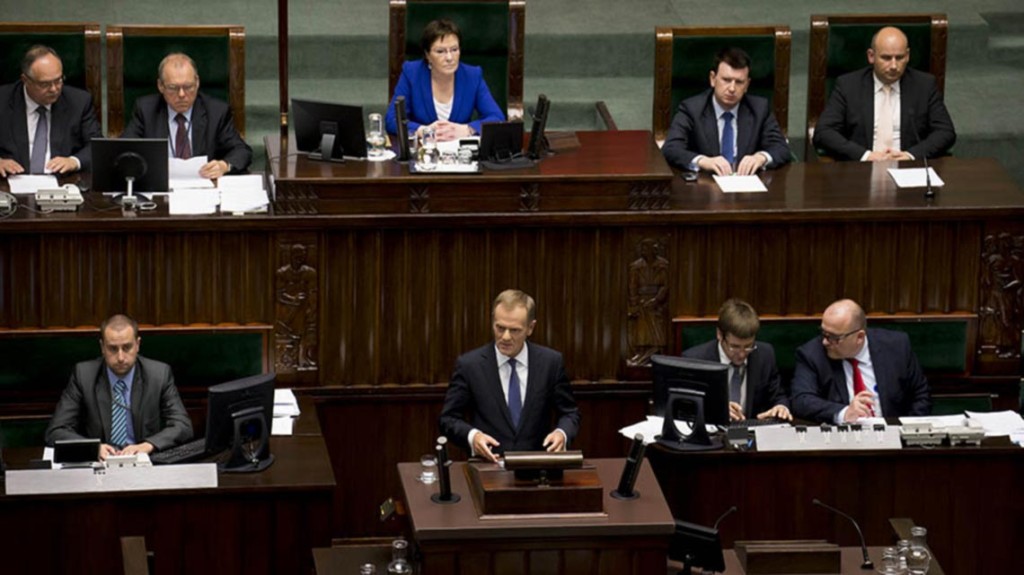 [quote align=’left’]For the Polish public, the wiretapping scandal has served not only to reveal what their politicians really thought but also to demonstrate how far the authorities in Warsaw were willing to infringe on freedom of speech and information.[/quote][dropcap]O[/dropcap]n June 14, Polish weekly magazine Wprost, specialising in investigative journalism, revealed the content of an alleged conversation between the Minister of Internal Affairs, Bartlomiej Sienkiewicz, and the director of the Polish National Bank, Marek Belka. The recording was made in the VIP room of a Warsaw restaurant frequented by Polish politicians. The taped conversation revolved around the possibility of the Polish National Bank supporting the ruling party, Civic Platform, with policies that would boost their electoral performance. This leaked tape has put in question the independence of the central bank from the government, which in theory, is guaranteed by the Polish constitution.

The series of tapes released by Wprost provoked public outrage and immediately put pressure on the government. The ruling party was quick to invoke conspiracy theories, suggesting that Russian secret services were behind the wiretapping which was aimed at discrediting the government. The Russians were allegedly motivated by Polish Prime Minister Donald Tusk’s important role of backing the authorities in Kiev in the continuing conflict in Ukraine. The government immediately launched an investigation and the hunt for the shadowy agents who set up the wiretapping is ongoing.

For the Polish public, the wiretapping scandal has served not only to reveal what their politicians really thought but also demonstrated how far the authorities in Warsaw were willing to infringe on freedom of speech and information.

From June 14 onwards, Wprost successively released transcripts of other recorded conversations and has made the recordings accessible online. So far we, the Polish people, have heard about the politicians trying to put pressure so that tax authorities avoid visiting their family businesses. We have heard about alleged plans over the central bank getting involved in politics. And most interestingly, we listened to what Minister of Foreign Affairs Radoslaw Sikorski allegedly said, “Polish-American alliance is not worth anything”. He appeared to resent the fact that Poland had to unquestionably follow the will of its US ally (all expressed in rather crude language).

The conversations laid out for the Polish public show the shocking cynicism of our political elite, as well as the extent of corruption and moral erosion within the political life of the country. Knowing that all these conversations were held over expensive meals which cost half a month’s salary for the average Polish citizen has made these tapes particularly difficult to swallow. It is now apparent that not only were we deceived by a political rhetoric that did not reflect the reality of intentions and actions, but we also have been left with a miserable socio-economic situation that our politicians could not care less about.