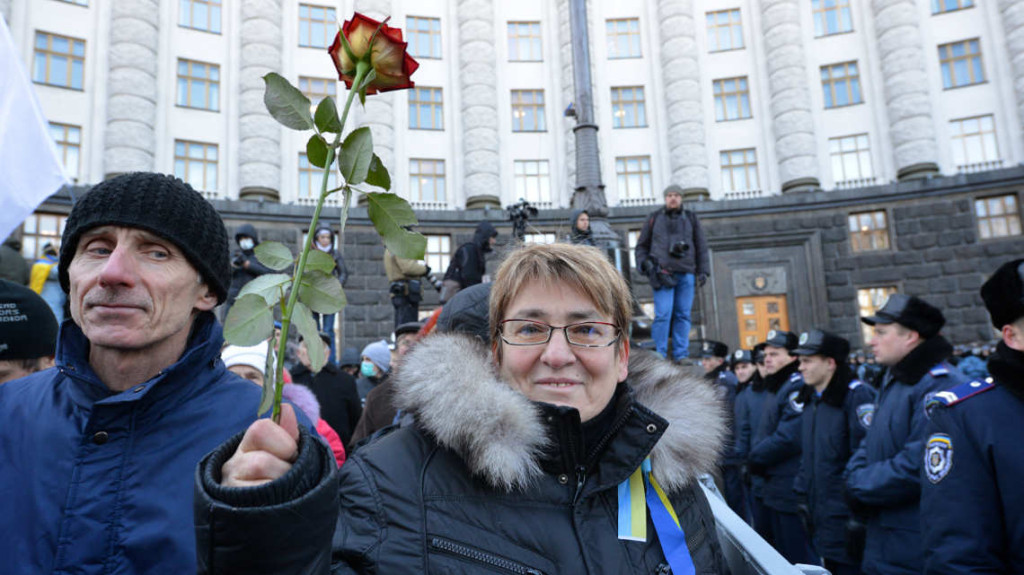 [dropcap]T[/dropcap]his meme has been circulating Facebook for a short time (1859 reposts, 353 likes as of time of writing) but probably reflects the feelings of a growing number of Ukrainians, who for several weeks (permanently or in shifts) have been defending Maidan in Kyiv or at least sympathize with the square. Repeated voices of ‘concern with the evolving situation’ or of ‘utmost regret due to acts of violence’ from abroad can in fact lead to no more than rage from those beaten, kidnapped from hospitals, tortured in the woods and police stations, shot at by snipers and bombarded with horrifying text messages. Those who fear that it’s coming for them – will be discouraged from any involvement.

Can the European Union presently influence in any tangible manner the course of events in Ukraine? To stop the Ukrainian authorities from killing their own citizens? To exert pressure on the administration of president Viktor Yanukovych to resign or at least to civilize its relations with the opposition and the demonstrators? To compel, even with blackmail, the oligarchs to oppose the actions of the administration? To reverse the geopolitical turn of the eastern “partner” (as Ukraine is grandiosely called in the flagship EU cooperation program)? To propose an aid scheme that would break Kyiv free from the energy and credit stranglehold of the Kremlin and the magnates of Namiotkin Street in Moscow?

Can potential economic and personal sanctions, or alternatively offers of support, loans and market preferences, help anything? I do not know the answers to these questions. I wish for them for myself, for Poland, Ukraine and the whole European Union. At the moment however, reason doesn’t point to positive predictions. What remains then?

If exaggeration and grand words in politics have any non-grotesque meaning, then it is in situations like these.

Lack of decisive action signifies – or at least it should – a moral catastrophe for the European Union. Firm decisions, however unsuccessful – would be only a public relations flop. But the current game is not about European PR. The upcoming days may indeed decide the fate of Ukraine for many years, through not necessarily in the sense leaders of Maidan think (even though I wish for their success with all my heart) – and even less so in the sense the overexcited media think, proclaiming every few hours proclaim the next “breakthrough” and approaching “decisive clashes”, think.

[quote align=’left’]Lack of decisive action signifies – or at least it should – a moral catastrophe for the European Union. [/quote]The next battle – though I hope I am wrong – may be won by Yanukovych. He may keep power and, for a time at least, navigate his way between pressure from Putin and resistance from his own society. Then lack of alternatives will become his greatest ally. It is true that Ukrainians in the first place fight for democracy in their own country and not for one or another geopolitical turn. Ukraine’s future will be made in Kyiv not in Brussels. This doesn’t change the facts: the feeling of abandonment by the West, awareness of the inactivity of political elites and public opinion in the European Union towards Ukrainian aspirations, which will become a perfect exercise in social conformism and resignation. Hope and outlook for the Ukrainian future in the European Union, belief in the determination of Europe to support Ukrainian society – these nurture opposition from the masses and not only from a handful of the bravest desperates. Factual political decisions by the EU – even if not completely successful – would determine, perhaps for years to come, the Union’s symbolic standing in the imagination of Ukrainians.

The Ukrainian march towards democracy will most likely not reach its successful finale in the next few days. If it is to last not only a few years but instead a few dozen, the European Union cannot allow a loss of its reputation and simple “acceptance of the reality”.

Our Ukrainian friends may excuse our transient political failure; we couldn’t ask their forgiveness for our indifference.