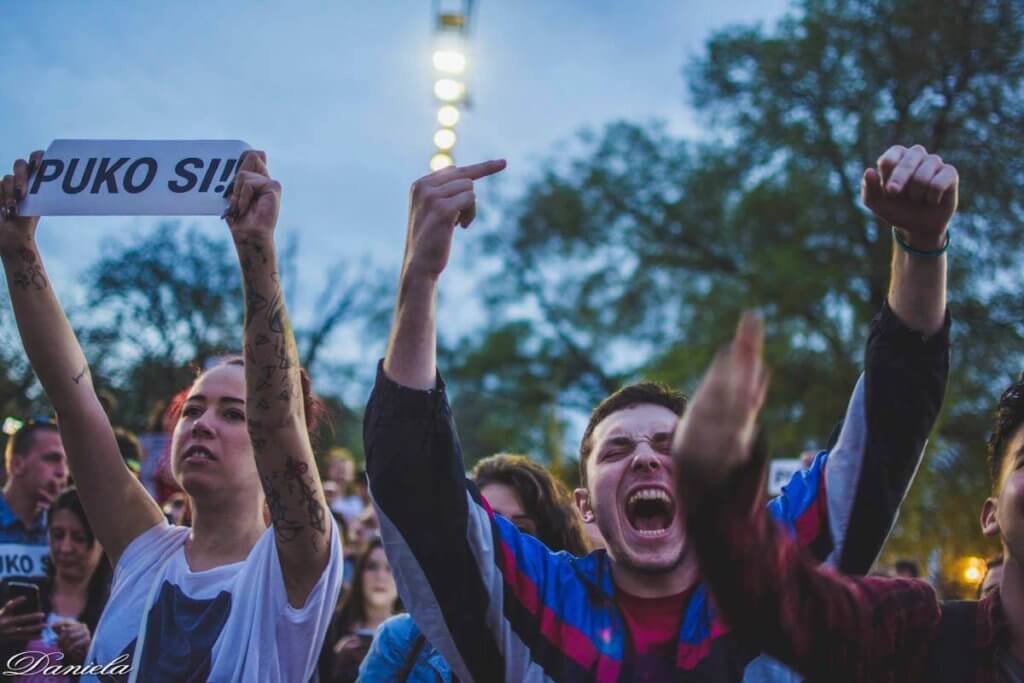 Serbia’s presidential elections were held on Sunday, April 2nd, which resulted in Serbia’s prime minister Aleksandar Vučić winning by a landslide. According to the latest preliminary results published on April 7th by the state election commission, Vučić won 55.07% of votes, followed by the liberal candidate Saša Janković with 16.36%, and Luka Maksimović, a parody politician, with 9.42%. Although these results were not unexpected, the pre election campaign was marked by accusations from other candidates as undemocratic and unregular. The results have launched a series of protests against Vučić’s victory in many Serbian cities, which have now lasted for more than a week. Protesters – mainly students – have been marching against Vučić’s “autocracy and dictatorship” and are demanding a dismissal of the state election commission, the media regulator, and top editors of the state RTS television.

Mislav Marjanović of Political Critique sat down with Andrea Jovanović, from Belgrade, Serbia, a philosopher, member of Collective Gerusija, co-editor in MILICA magazine, and contributing editor at web portal Proletter, for a discussion on the protests, the left, and future possibilities in Serbia.

Mislav Marjanović: First of all, can you shortly comment on the significant distrust of the outcome of the latest presidential elections and the questioning of the legitimacy of Vučić’s victory, as these were the main triggers for protests across Serbia after the April 2nd presidential elections?

Andrea Jovanović: I believe it’s the culmination of a great discontent that grew during the whole campaigning process.  People in Serbia who have internet skills or follow rare independent media were most certainly aware of many illegitimate and even illegal things that were taking place before the election but couldn’t do much about it at the moment. I’m pretty sure nobody expected for Vučić not to win, but perhaps many expected a second round or at least that he doesn’t win that much.  Such discontent, combined with justified suspicions on what happened during vote counting, and the refusal to believe so many people are satisfied with Vučić’s politics, were the main triggers.

What are the main claims of protesters? Is it just about Vučić’s authoritarianism to which Serbia is heading? Or is it also about the economic policies implemented by Vučić’s government?

It takes time to connect things in a depoliticized society as in Serbia; for now people are protesting almost everything.

As always, its a mix of both and it isn’t without reason: Vučić’s economic policies are tightly connected to his authoritarian and dictatorial political methods. The big question is could he do everything he does without media censorship, buying social peace, and without his army of paid desperate people, all the corruption and nepotism. But of course, it takes time to connect these things in a depoliticized society as in Serbia – for now, people are protesting against almost everything.

How does public media cover these protests? Could you comment on the current situation with (public) media in Serbia, taking into consideration the common accusations of their involvement in Vučić’s propaganda?

They cover it superficially and formally online and in written news, even less on T.V. There’s always speculations about the number of protesters but it seems to me that the main tactic is to write some shallow article, and after that publish an opinion piece on it from some so-called political commentator – who is always some Vučić’s supporter, who discredits protesters in various ways, calling them corrupted, bribable, paid by Soros, etc.  There are other strategies as well, like when a sociology professor patronized protesters, stating “youth have the need to show some level of aggressionwhich is a complete misuse of his position as a university professor.

Those accusations are true – public media in Serbia are miles away from being free or people’s media, but the blame cannot only be placed on media workers, since many of them (those who are not on the top) are often blackmailed with termination of employment (or even worse).

How important is the role and influence of foreign factors, such as the EU or Russia, in Vučić’s power, what protesters are calling the “dictatorship”?

That’s a difficult question I’m not very comfortable answering shortly. I could only say that I believe influence on the people themselves is not very high; there are prejudice accusations that people in Serbia would blindly follow Putin which are definitely not true, and, on the other hand, there’s no need to mention that we were always at least somewhat skeptical of the EU. Vučić’s dictatorship is not mainly grounded in foreign support, but in his own ways of governing. Foreign support, especially from the West, actually tells us more about EU hypocrisy than the situation in Serbia: it tells us that Troika and EU are not really concerned much about their beloved democratic values, human rights, and freedom of the press as long as the local sovereign follows their economic policies without question.

This is not the first massive protest against Vučić’s government and policies. There have also been big protests related to the Belgrade Waterfront project. It seems that the crucial problem of today’s Serbia is that there is no strong opposition and what opposition exists is divided, just like in Hungary, Poland, and across the whole Balkan region. Do you agree with that, and do you think any left-wing party or political movement could change this?

In the context of political representation, yes, we could say this is the crucial problem. But in the broader context of politics as such, I’d say the crucial is the high level of depoliticisation and people’s mistrust that things can be different, that society can change. And I don’t think this is specific for Serbia. What is different here is that the so-called end of politics, the end of ideology, if you want, came a little bit later, only after Vučić came to power and introduced completely pure neoliberal agenda. The big questions, like the EU or Kosovo – those questions that had used to make political divisions – were not in the spotlight anymore. Any opposition was left without clear political goals capable of contradicting Vučić’s in an important manner.

I don’t think leftist politics are somehow always intrinsically present in the world. We are actually starting from zero.

So many have argued – and some still are – that this opened up a bright space for the left, that left-wing politics are precisely the thing missing, that the left (whoever it is) needs to sit in that empty chair. But I disagree with those assumptions because I’m very skeptical towards the very existence of that “open space.” I don’t think leftist politics are somehow always intrinsically present in the world. We are actually starting from zero. Every destabilization in mainstream politics can be an opportunity to start building that position, but I think we are still very far from imposing it on the public. What I’m trying to say is that we must first build that chair if we ever want to sit on it. And it’s not an easy task – especially if we consider that traditional leftist answers obviously don’t work anymore. But that is another issue.

I hope they’ll go as far as possible right now, but it is really hard to predict how far that actually is. The most important things these protests have so far done is to show people that they can still at least try to do something about their lives, and that they are not alone in their discontent and the will to fight. This is a good thing in the context of depoliticisation, as I’ve talked about above. But if we consider the very logic of non-organizational, non-structured and completely spontaneous protests, they very rarely end up achieving anything. So the most important question is: what will happen after the protests end? I hope connections that are more long-term and based in persistent and constant political work are emerging. And finally, I believe it’s crucial not to expect anything big to happen overnight (I’m not saying it’s impossible, only that we shouldn’t bare our hopes there), and to take this fight – and every fight in the future – step by step; if you look back, I’m 100% positive these protests wouldn’t have been possible without the whole previous year of protests against the Belgrade Waterfront. None of these things by themselves are sufficient. It only suggests something perhaps discomforting, but realistic: the journey to change will be long and hard.