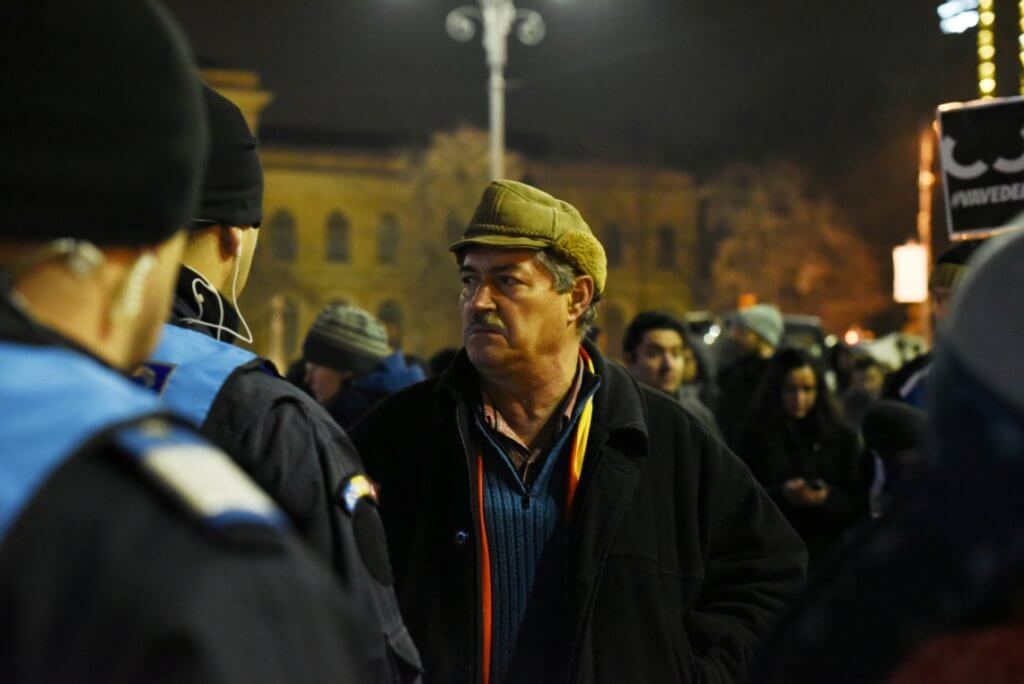 Thousands of demonstrators gathered around Romania’s main government building in Bucharest yesterday to continue pushing for a transparent and democratic government and to make sure that their demands do not vanish into thin air. We speak to Paul Vîrvea, an activist living in Bucharest who has participated in the protests since the beginning.

Romania’s Social Democrats returned to power in December’s election. Since then, they have tried to approve an emergency bill pardoning corrupt politicians, a measure that would officially decriminalise corruption. How do Romanians perceive corruption in their country? Why this has been the spark to mobilise citizens in the country?

Paul Vîrvea: There are two types of Romanias in terms of social and cultural values – hence two perceptions on corruption. What we witness nowadays is the reaction of one of these two Romanians – the smaller one, the one who grew with internet, with urban education, who had the possibility to travel abroad and catch many European behaviour patterns (including civic attitude against something they perceive as hurting their interests). Historically and culturally, Romanians as a whole display a rather passive-lax attitude towards corruption, as it is an atemporal, perpetual part of their lives for centuries. This attitude is rooted in Christian Orthodoxy and Levantine influence and has been “perfected” by the Communist era. This is a palpable reality in deeper Romania, in smaller towns and in villages. Therefore, unfortunately, however big we see this protest grow, we still talk about the exception, rather than the norm in perceiving corruption as a crime. So the mobilising “spark” makes sense and works only for a minority who is outlooking, westward-minded and embraces change. The bigger, deeper Romania is defined by a either passive, or hostile attitude towards change, including change of their perception in corruption.

How is the government responding to the protests now? What are the expectations?

There have been resignations within the second and third layer party ranks, a VP of the party publicly sided against the Government decision.

The Government, in my opinion, is confused because it has put all bets on social behaviour specific to their bigger, passive, docile Romania, where the ruling party draws its main electoral power. I think the PSD (the biggest party in the current government coalition) did expect some protests but hoped they would die down as many other protests in the past – because this is the way Romanians historically act in discontent. There have been resignations within the second and third layer party ranks, a VP of the party publicly sided against the Government decision, a minister perceived as a technocrat resigned and a MEP publicly shunned his party’s decision to not back down.

Different waves of protests have spread in Romania over the last years. What is different this time?

The context. We are less than two months away from parliamentary elections clearly won by the Social-Democrat Party (PSD) thanks mostly to a huge absence rate (less than half of Romanians able to vote showed up at the ballot box on December 11 last year, and PSD enjoys a stable, disciplined electoral base). Shocked by the results, a big chunk of those who did not vote felt somewhat guilty and right now try to “redeem” their absence at the vote with protest.

What responses are the protesters expecting from the rest of Europe?

Precisely what we are getting already, if not a bit more. Western embassies and Western leaders blasting the Romanian Government’s decision and pressuring it to back down, combined with shows of solidarity for the protesters from the public.

Romania is one of Europe’s poorest countries, its banking sector is almost entirely foreign owned, and many of its politicians are corrupt. Why right-wing parties are not entering the Parliament?

We are only 27 years away from totalitarianism. It exists in the living memory of anybody aged 25 or older, if not directly, at least because Communism has never left the public debate. We craved for democracy and freedom of movement and better living standards. I would say many of us are so traumatised by Communism that we would prefer a phony democracy, rather than an honest authoritarian regime. Besides, there is a fortunate mixture of specifics from both Romanians mentioned above that keeps us away from extreme right temptations (as we see in Netherlands, France or Austria). This mixture deserves a separate debate. Fact is, the two far-right parties competing in last year’s elections got a total of 3pct of the vote combined – not enough to ensure any entry in the Parliament.