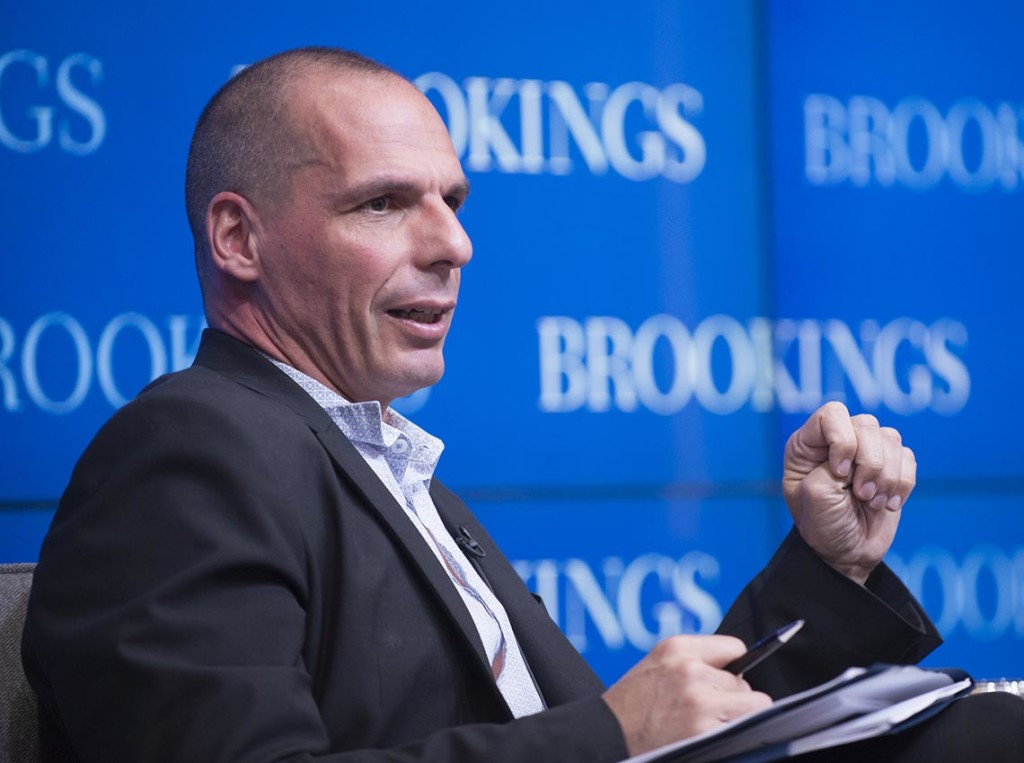 You announced that you are founding a new pan-European movement. As you said in an interview for the Italian magazine l’Espresso, this political movement will be established at the beginning of February and has ‘a single, radical objective: To democratize the EU!’ It should offer people a ‘third alternative’ between ‘the cocoon of the nation-state’ and ‘deeply anti-democratic EU institutions’.

The new pan-European movement wants to democratize Europe. In that case, it is essential that it is joined by active people from Central Europe – a region that for many observers is cause for concern.

This is certainly an important response to the threats Europe is facing. In particular, this concerns the rise of authoritarianism, which demonstrates that the connection between democracy and capitalism is by no means inevitable. As the financial crisis and the changes caused by economic globalization have shown, liberal democracy is often rather a burden to capitalism.

The new pan-European movement wants to democratize Europe. In that case, it is essential that it is joined by active people from Central Europe – a region that for many observers is cause for concern. Allow me to say a few words on this topic.

The iron cage of Central Europe

It was precisely the countries of Central Europe that in the past months refused solidarity with refugees and so strengthened the rift between European states. What are the causes of this attitude? And can it be changed somehow? As far as the Czech Republic – where I come from – is concerned, xenophobia and racism are on the rise, accompanied by an aversion towards the West. At first glance, this is paradoxical. After 1989, the West was much admired and the ‘return to Europe’ was the slogan of most Czechs. Time, however, brought great disillusionment and many would say that this was simply the result of unrealistic expectations. But this is not what I think. I fear that the situation is more serious. It seems that many Czechs have stopped believing that we will become a prosperous Western country with a decent standard of living. This has grave consequences.

It seems that many Czechs have stopped believing that we will become a prosperous Western country with a decent standard of living. This has grave consequences.

In this respect, statistics of Czech trade union economists are illustrative. They show that in 2014, the Czech gross wage was 28% of the German and 29% percent the Austrian wage. That means that for the average salary of one Austrian or German employee, multinational corporations can hire three ‘cheap’ Czechs. The Czech minimum wage is also dismal. The OECD has calculated that a Czech single parent with two children receiving the minimum wage would have to work sixteen hours a day in order to escape poverty. The Czech Republic simply remains in the position of a low-cost economy. On the international scene, it competes with low wages, a low (devalued) exchange rate, and worsening social protection for its citizens.

The Czech transformation after 1989 was often held to be an example for other post-communist countries. But this victorious narrative soon found its critics, including the famous economist Joseph Stiglitz, who correctly pointed to its darker side. In his book Globalization and its Discontents, he writes that the Czech Republic ‘initially got high marks from the IMF because of its policy of rapid privatization; but its management of the overal transition process resulted in a GDP that, by the end of the 1990s, was lower than the country’s 1989 level’. Apart from that, the outflow of profits from the country has been increasing. In 2014, 8 billion euros of dividends left the country, as opposed to only 3,4 billion of re-invested profits. And lastly, I will mention one more telling indicator. Czech trade unionists have calculated that if the Czech economy will continue converging with the West in the same way as it has up till now, it will attain the level of German salaries in about one hundred years. In other words, after a quarter of a century of ‘catching up with the West’, all that is left of the hope that the Czech Republic will join other developed European countries as their equal partner is only the bitter hopelessness of a second-rate pariah.

Anonymous data of course hardly express what we are experiencing every day. There is huge social tension, anger, and frustration of people who have no support. As a renown economist and citizen of crisis-stricken Greece, you of course understand that low living standards, uncertainty, and growing economic pressure breed racism. In the above-mentioned interview for l’Espresso magazine, you accurately observed that ‘Eastern European countries have their own past and reasons for reacting the way they do. The problem however is that the mind-set put on display by their ruling classes undermines basic European values of solidarity and humanism. If Europe loses its humanist values, and fails to embrace refugees for reasons that boil down to racism and to a “not in my backyard” mentality, Europe will turn into an iron cage for discontented peoples’.

It is this ‘iron cage’ that Central Europe is now turning into. Amongst the people, there is a growing sense of complete powerlessness and injustice, which the ruling classes are skilfully turning into hatred toward migrants and everything ‘foreign’, instead of fighting for the interests of their citizens. In Poland, the Law and Justice party (PiS) is now performing an uncompromising coup, abandoning the institutions of liberal democracy and returning the country back to the 1930s. PiS is setting itself in the middle of a ‘historical’ struggle against Europe, which has given itself to so-called ‘totalitarian’ ideas, such as gender equality and the acceptance of refugees.

The tragedy of Central Europe lies in the fact that the Left was decimated here in the name of the ‘decommunization’ of society after the collapse of the former Eastern Bloc. Nevertheless, even here there exists a whole range of initiatives, movements, and in the case of Poland even the political party Razem, which have not, even in these hard times, given up their commitment to basic European values, or the very idea of emancipation. After all, in the Czech Republic not everyone shares this hatred torwards refugees, which is mainly stoked by a brutal media campaign and fascicizing voices making a lot of noise, trying to divert attention from real problems.

Let us renew faith in a better world

I believe that the true catastrophe of Central Europe is the absence of hope for a better future. The dreams of 1989 – no matter how naive they may have been – reflected a belief that the world, and with it Europe, could be better. This belief was, however, trampled on by real capitalism, which pressed home a ‘man is wolf to another man’ style of thinking  and vulgar Social Darwinism, in which only the most ruthless survive. Today, many people laugh at words like ‘solidarity’, ‘democracy’ and ‘human rights’, because they often don’t live in them. They are exposed to the everyday arrogance of power.

In the past year, the Czech Republic experienced an unprecedented wave of hatred towards Muslims, although hardly any live here. And also a wave of hatred towards Greece. Distasteful campaigns in the mass media labelled Greeks as ‘irresponsible slackers’, who ‘don’t repay their debts’. Please believe me that many independent Czech journalists, activists, and intellectuals are trying to stand up to this effusion of European fascism. But our voice is systematically marginalized. The outside world hears only the voice of political demagogues and incendiary journalists, who intentionally provoke hatred and are destroying the last vestiges of solidarity, compassion, and humanity.

What I see around me is cynicism, growing aggresion, and perversity, which is making life unberable. Dear Yanis, in your text ‘Confessions of an Erratic Marxist in the Midst of a Repugnant European Crisis’, you predict that it will certainly not be the Left who benefits from the possible disintegration of Europe. It will be the ‘Nazis, the assorted neo-fascists, the xenophobes and the spivs’, who, I must unfortunately agree with you, are attempting to return our world to some ‘postmodern version of the 1930s’. This unfortunate forecast is being fulfilled in the eastern parts of the EU every day.

Solidarity must not know any borders and if we allow for their creation, we will start to resemble the ‘neo-fascists, xenophobes and spivs’ that you write about.

Nevertheless, I believe that the politically impoverished Central European region must not be left at the mercy of this predicament. Even here there are still many of those who have not given up and continue fighting. And it is those people who should be supported. It is vitally important, as I firmly believe it will be them and their children who, together with others, will in the future lift countries such as the Czech Republic, Poland, and Hungary out of the shadows in order to create a new, truly democratic and solidary Europe.

So if you say that the goal of a pan-European movement is to democratize the EU, I appeal to you not to forget about Central Europe when creating it. However it may seem that the local authentic leftist movement is weak, lacking a wider social base, and insignificant compared to other European countries, I believe that if it is not overlooked, it can stand side by side with the rest of the pan-European Left and together with it also win. I do not call for this only because we are part of a common Europe and the same progressive traditions, which it is so neccesary to continue today. I call for this also because solidarity must not know any borders and if we allow for their creation, we will start to resemble the ‘neo-fascists, xenophobes and spivs’ that you write about. We simply must not leave the future to those who are leading today’s world into the hell of racism, Social Darwinism, and the cynical exploitation of the weaker by the stronger.

Translated by Veronika Pehe. This text is simultaneously published in Czech on A2larm.cz