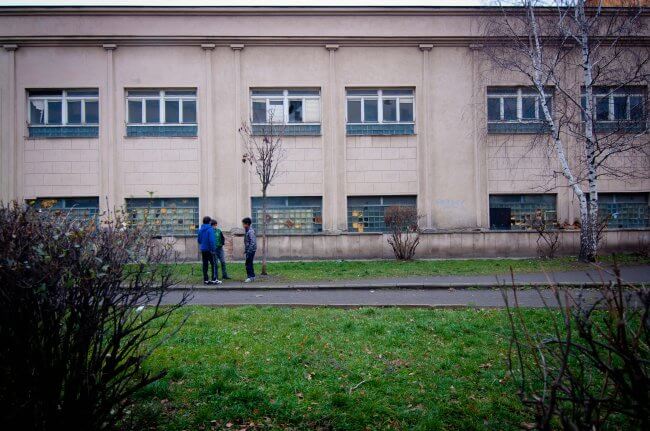 The houses are situated in a part of the city widely known as the „Brno Bronx“, inhabited almost exclusively by the Romani. Though real estate deals that force inhabitants onto the streets are in no way unheard of, a sale of this size is unprecedented here: with 120 flats mostly occupied by families with children being made vacant, the deal could mean that as many as five hundred people are thrown out onto the street.

While it is within the rights of the buildings’ owner not to prolong the tenants‘ leases, the situation is further complicated by the fact the tenants in question are Roma. There are over two hundred thousand Romani living in the Czech Republic, and roughly half of them are “integrated“, meaning they have a home, have graduated school and have a stable income. Nevertheless, they still face racism on a daily basis. The remaining half is deemed “maladjusted“, ‘inadaptable“ ‘uncivilized”, or, in more accurate terms, socially marginalized.

They are people without education, without jobs and, naturally, without permanent homes.

The City Council has outright stated that Brno lacks the capacity to accommodate dozens of large families and the chances of a Roma family being able to find accommodation in a privately owned building are essentially non-existent. As is, curiously enough, any initiative aimed at actually solving the problem: according to Czech TV, the City Hall claims it contacted the real estate agent while the company in question, Dolfin Real Estate, stated it was never approached. What we have here is a paradoxical dance; the two bodies’ movements are perfectly choreographed to avoid any contact whatsoever, possibly in the hope that the rapidly approaching winter will solve the problem for them, or at least allow the considerably less crowded cemeteries and crematoriums to take part in resolving this housing crisis. The imagery is, obviously, absurd (especially considering the temperature during an average Czech winter) but it shows the typical official response to the problem: close your eyes and hope it goes away.

Ignoring the issues around the Romani and our treatment of them actually seems to be the order of the day; the last couple of years have happily provided us with a much better minority to be racist towards in the guise of the (still curiously absent) refugees. The media spotlight is off, the righteous anger directed elsewhere and all is well: surely the Czechs cannot be so racist as to discriminate against two minorities at once.

„I need to ask you a little personal question… Are you, by any chance, Roma?“

What makes the real estate sale on Cejl street a social disaster is not simply the fact that some leases are not being renewed, but rather a problem that permeates the entirety our society: it is near-impossible for the Roma to find a place to live. And yet having a permanent address is a requirement for taking social support and finding a job. It is true that there are plenty of people that display signs of anti-social behaviour among the Roma (and among the Czechs, as a matter of fact) and it is by no means certain that they actually want to integrate, or, for that matter, whether the majority actually wishes to integrate them.

The one sure thing, however, is that all kinds of spanners are thrown into the works of those Romani who do try to fit into Czech society.

In March this year, a real estate company in Brno was fined 20.000 crowns, a pittance given real estate market prices, for refusing to rent a flat upon learning the prospective buyer might have the wrong skin colour. They were very polite and apologetic about it: as a recording of the phone call in question reveals, they just wanted to ask „a little personal question“. When challenged that this information surely cannot be relevant, the real estate agent responded with „it matters to the flat’s owner“.

The management of a residential hotel in Bratislava in neighbouring Slovakia provided an even more earnest response. A month ago, a journalist tried to hire rooms for four labourers there. The first question he was asked was whether they were white or Romani, with a rather predictable follow-up. Thankfully, the residential hotel quickly redeemed itself: it turned out that they in fact did accommodate Roma, they even had a special floor for them since apparently the other residents did not want to see them in their hallways. The sheer humanity of this gesture warms one’s heart. After all, nothing says indiscrimination quite like segregation.

Charge ‘em for the lice

Real estate agents love to get rid of the Roma for a very simple reason: they lower property values . This does not, unsurprisingly, depend on whether they are good tenants; things like paying rent on time, not playing loud music and generally steering well clear of the landlords‘ ire are less relevant than the opinions of the people living nearby. It is not just a flat located near a ghetto of socially marginalized Romani costing only a fraction of its worth, it is also the simple fact of people refusing to move in into a house with a Roma tenant. The owners of flats for rent often foresee the question and answer before it is asked: this is how we got infamous advertisements such as „1 bedroom flat for rent. NO MINORITIES!“ The commonly voiced justifications for these are bad experiences with former tenants, with a good helping of collective guilt implied.

What can the evicted families do, then? Finding a flat on the real estate market is an uphill battle and the city does not have the capacity to help. The few flats intended for the socially marginalized that happen to be available are hopelessly full and applying for a regular city-owned flat can take years. The few existing homeless shelters are both full and lack the facilities to help whole families. Ultimately, the evicted Romani are left with two options: renting a room in a residential hotel that specializes in exploiting people down on their luck by overcharging for rooms infested with lice and lacking even basic hygiene facilities, or renting from a real estate owner like Dolfin, who only happens to offer short, uncertain contracts that can be terminated at moment’s notice.

Death by a thousand cuts

The leitmotif resounding throughout the Romani housing issues is the omnipresence of racism in our culture. We are not talking about just a couple hundred extremist crackpots or some kind of faceless ignorant mass: racism is prevalent in the system itself. We live in a country where the Vice Premier, who just happens to be one of the most popular politicians and quite possibly the most powerful man in the country, openly denied the Roma holocaust, a country where the deputy ombudsman, of all people, states that refusing to employ the Roma is not discrimination but simply the result of past experience , a country that sends Romani children to practical and special schools for no reason other than „normal“ parents of „normal“ kids not wanting their little darlings threatened by those mean, nasty ethnic minorities. In short, being racist in the Czech Republic is not only perfectly OK, but also fashionable, as it clearly deals a blow in the on-going war against the scourge of political correctness, whatever it may be.

In Brno, five hundred people will be thrown out into the cold before the end of this year. Some may seek asylum with their relatives, others will end up living under scandalous conditions in residential hotels. Some may manage to negotiate with the new owners of the buildings, others will find alternative means of coping with their situation. All of them are victims of the system. They are not targets of some concentrated oppression but just happen to be incidental casualties of a whole lot of little doses of racism coming from different directions: flat owners, real estate market, public perception and political culture (or lack thereof). The common perception of the Roma in Czech Republic is that of unruly, violent, criminal people. Public discourse terms them „inadaptable“, „maladjusted“, „unintegrated,“ all those wonderful euphemisms designed to make Czech society feel better about the situation. But as the business in Brno shows us, the conditions they are supposed to adapt to are not quite equal.