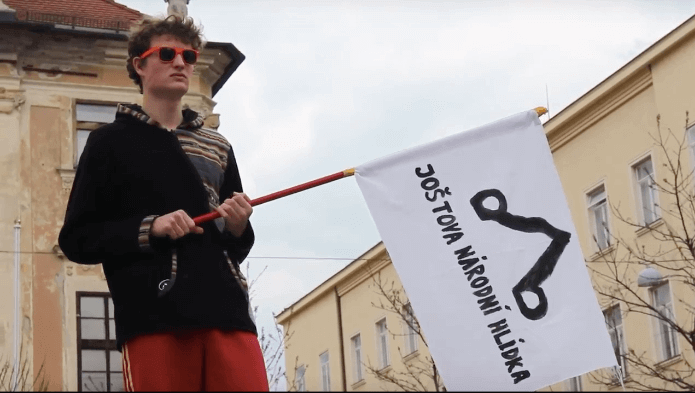 On May 1st, a group calling itself “Jobst’s Club” and claiming to be part of the National Militia, a vigilante organization, held a demonstration in Brno, Czech Republic. What looked like a nationalist manifestation turned out to be a prank – after delivering speeches, the demonstrators undressed and rode naked through the streets on bicycles.

Watch the video from the event and read the interview with the organizer, Vojtěch Boháč, below.

How did you come up with the name “Jobst’s Club”? What does it refer to?

Vojtěch Boháč: The sculpture of Jobst of Moravia, a fourteenth-century nobleman, has become a kind of modern symbol of Brno. We wanted to parody the fact that the national militia would probably consider him a symbol of Moravian pride, even though he was basically a gangster.

Did you register the demonstration as an official event of the national militia?

Everyone who took part in the demonstration officially entered the National Militia, which is an association of reservists. It is led by two lieutenant colonels, Krejča and Obrtel. The former is connected to Adam B. Bartoš’s National Democracy movement and believes in the Judeo-Masonic conspiracy. Obrtel look like a very sincere person in his videos – it seems he would really like to have these militia units, but then someone always comes along to thwart his plans. And we wanted to be those people this time, as we’re not happy that such uncontrolled militia units exist.

What was the main aim behind this event?

The original idea was to show people that these units, which claim they will take over the role of the police if necessary, can be joined by absolutely anyone. Our intention was to expose that. As for the demonstration itself, I registered it with the local council as a cultural event. The local council secretary for Brno-Centre seemed to be happy that there would be something going on May Day.

So people came convinced this would actually be a nationalist manifestation?

We were aiming mainly at the media, we didn’t want to provoke a conflict. And we also didn’t want to create any trouble for the council secretary, as he had been very helpful. So we only sent out the invitation to the local militia a day in advance – a few people turned up and walked away in disgust. But we also attracted the attention of people who were just passing by.

What reactions did you get when you undressed and got on your bicycles?

It was unexpected. Some people laughed, others shook their heads, some covered their children’s eyes. But it was quite positive, people just couldn’t believe what they were seeing. We started off aggressively with nationalist rhetoric, but quickly started talking about the fact that a feeling of safety will not be achieved with guns and aggression, but rather through the solidarity of your fellow citizens, so people started realizing the whole thing was in fact a joke. And when we undressed and rode off, the reaction was great, no one reported us for indecency or anything else. When we called out that “Jobst’s national militia patrol is safeguarding the city”, people clapped and recorded the event on their phones. It seems that Brno liked it.

I would say that Czech demonstrations are very uniform and serious. But for example in Sweden, people have protested against neo-Nazis by dressing up as clowns; in France, people in costumes parody soldiers with assault rifles. They want to get people over to their side without aggression. There’s no point in being aggressive towards people in a city where you want to feel good and safe. This is something that some of us would like to continue doing in the future – fighting nationalism with a humorous and thoughtful approach.