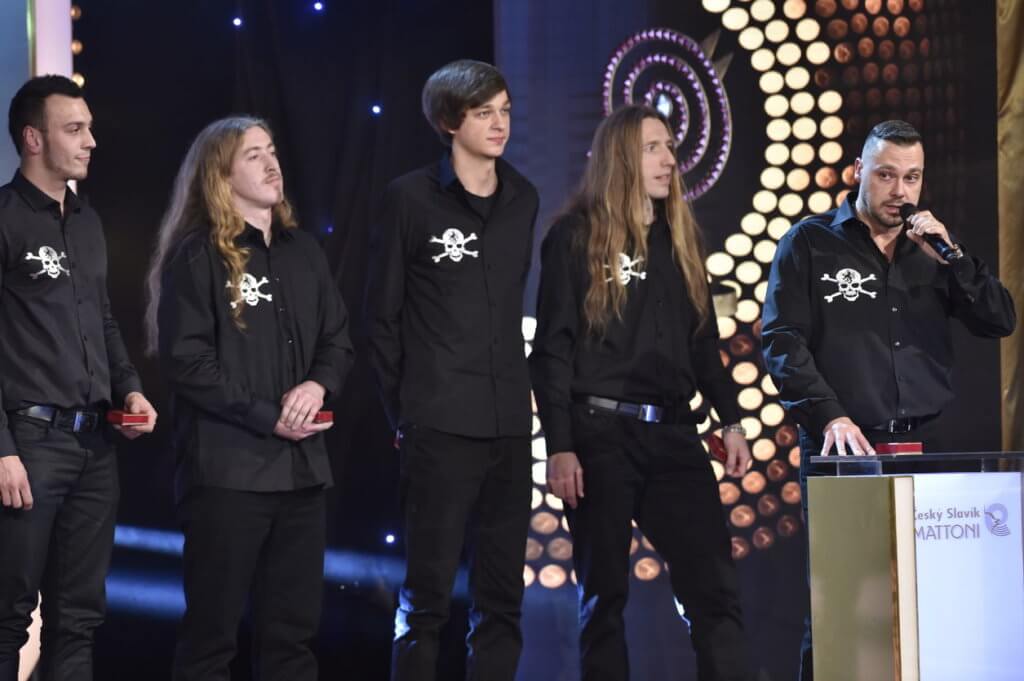 "Think we should have changed from those shirts?" "Naw, totenkopfs are tasteful." Photo: TV Nova

Every year, the most popular musicians of Czechia gather to see the prestigious Czech Nightingale award pass into the hands of the same man for forty years in a row; unsurprisingly, the entire contest is a bad joke. But there are some interesting insights into Czech society to be gleaned from the runners-up – namely, the fact the contest has been happily legitimizing neo-Nazi music for the last two years and no one seems to mind.

The first time most of the country heard of the band Ortel (meaning “judgment” or “sentence handed out by a judge”) was in 2014, when they managed to almost get a Nightingale – for some peculiar reason, they managed to jump from a beautiful 105th place (ensured by a tiny fanbase of neo-Nazi crackpots) to coming in fourth. Fast forward a year and they were at the ceremony, taking bronze and silver awards for best band and male vocalist. Fast forward another year and here they are again, complete with Totenkopf shirts.

The reason is actually perfectly straightforward: Ortel has figured out how to tap into political events. Its front man, Tomáš Ortel – a staggering display of imagination there – went from singing in the neo-Nazi band Conflict 88 (greatest hits include “Pure World”, “Zionism”, “For Race And Nation” and “KKK”) to establishing his own little style: a milder, toned-down version that perfectly resonates with all the latent racism, xenophobia and violence in Czech society, with all the ideals and none of the names – so no more enterprising patriots should suffer nasty shocks when the entranced crowd starts shouting “Rudolf Hess!”

The result is a publicly acceptable Nazism where the proper protectors of Czechness don’t even mind the crowds giving Hitler salutes at concerts.

Ortel simply realized that as a far as being a public enemy goes, Jews are hopelessly out of fashion in the Czech Republic, and so he turned to juicier targets. He has had some mild successes in spewing hatred against the Roma (a song of his even become the anthem of the now-disbanded-and-reconstituted extreme right wing Workers’ Party) but the real breakthrough came with the 2013 song “Mešita” (The Mosque). It is an inspiring piece: the prospective listener learns that literally all Arabs want (the fact there might be a slight difference between an ethnicity and a religion apparently went over the great artist’s head) is to cut off our heads, stone our wives and make us listen to our burqa-wearing children wailing prayers, presumably not in that order. This masterpiece has gathered around three million views and catapulted Ortel from obscurity into the mainstream: the band formerly known only to the police suddenly became the voice of the people, all thanks to the refugee scare.

The man himself insists that neo-Nazism was just a phase and he is not even a racist, he simply has the country’s best interests in mind. Those just happen to include disposing of all ethnic and religious minorities that are after our social security. With extreme prejudice.

Under happier circumstances, Ortel would be considered a bad joke: a band extremists refuse to take seriously because it is too soft and ignored by everyone else due to its blatant racism and dubious musical qualities. But it has somehow found a perfect niche in the market by voicing the most common prejudices and media scares. Still, it is just one band.

And it is not like the entire country has its say in the voting: the winner is determined by the amount of people who somehow manage to 1) give a damn about the thing in the first place, 2) openly and publicly support a Czech musician 3) come up with two other Czech musicians they give a damn about, 4) actually get around to sending the vote, with each step trimming the voter base further and further. Results indicate that there is a not-so-secret cabal of people who elect the year’s winners out of pure inertia, as evidenced by the main prize yet again going to a man who already has 41 of the things and managed to sing in public on a grand total of two occasions this year. And he won with 36 000 votes – in a country of ten million. Ortel came second with about twenty thousand.

The band is a joke, the award is a joke, there is nothing to fear, right? Except for the fact the award ceremony is broadcast during prime time by the most popular TV channel in the country. It is a glamorous occasion, with all the celebrities present displaying their shiniest clothes and latest cosmetic surgeries.

The ceremony portrays the cream of the crop, the best of the best, the country’s cultural elite. And they are all giving standing ovations to neo-Nazis.

The importance of protesting politely

It turns out it was not quite all of them, though: a couple of guests protested by whistling and leaving, most vocally the rapper Radek Banga. Being Roma, he obviously never encountered racism in any shape or form and the fact he decided to oppose the public approval of a criminal ideology simply boggles the mind; most likely, he just did it for the publicity anyway – at least according to the social networks. After all, what in the world could possibly make a Roma protest against publicly acknowledging people that praise the wonders and benefits brought by the holocaust?

Banga issued a statement that accused just about everyone present explicitly and the entire country implicitly of quiet complicity with Nazism. Then the death threats started coming; not a big deal under normal circumstances since the one thing social networks are best at is giving voice to the little Hitler lurking within most of us, only… It turned out there are quite a lot of little Hitlers out there and they cannot seem to decide whether it is the fact Banga pointed out the unsavory ideological background their beloved bard bases his masterpieces on or the fact he dares to do it while being a member of an ethnic minority that offends them the most.

They are not racist, you see: they just think someone from the Roma minority has no right to make statements while Ortel is merely making use of his right for free speech.

And it’s not just Facebook’s nameless legions of little wannabe führers either; a good amount of celebrities present wasted no time in producing their own pearls of wisdom. Lucie Bílá, awarded for being the best female vocalist also by means of pure inertia, maintains that that naughty Banga just was not being polite. Her exact words being “Some things should only be said in private,” one cannot help but wonder just what would the proper, polite and socially acceptable way of drawing attention to the fact the celebrated people on stage happen to be neo-Nazis consist of…

Now, according to the law, “support and propagation of (political) movements directed towards suppressing the rights and freedoms of the individual” is a crime (Criminal Code of the Czech Republic, article 403) that happens to be generally ignored when it comes to racist and xenophobic propaganda. But there used to be a certain comfort in being able to blame that on the ever-perceived incompetence of Czech police. Alas, that comfort is gone: the last two years’ Nightingale awards indict the biggest TV channel and most popular mineral water manufacturer (who sponsors the whole thing) with complicity as well.

But by far the most absurd facet of this whole fiasco is the fact the whole unpleasantness could have been easily avoided. There is even a precedent which demonstrates that Mattoni (only the purest mineral water – now there is an epithet that suddenly turned frightening) is not concerned with the freedom of speech and opinion all that much. In 2013, they saw fit to ban the rapper Martin Pohl (known in the musical world as “the Butcher”) from the contest, citing his violent lyrics as the reason. Turns out violence is Bad – too bad about this year’s all-too-obvious implication that racism is Good.

The Nightingale awards are a tiny incident, almost meaningless in the grand scheme of things – but that is not where the real horror of this story lies. What we have here is institutionalized, officially blessed, and publicly acknowledged display of the fact that there is absolutely nothing wrong with spreading hate and praising what most likely is the single most vile ideology humanity has managed to come up with. But it is all literally inconsequential. Allow me to make a little suggestion for the Czech cultural elite here: when it is time for next year’s Nightingales and Ortel shows up again, do not bother with clapping. There are gestures the public will appreciate much more – and what is more, you only need one hand to perform them.