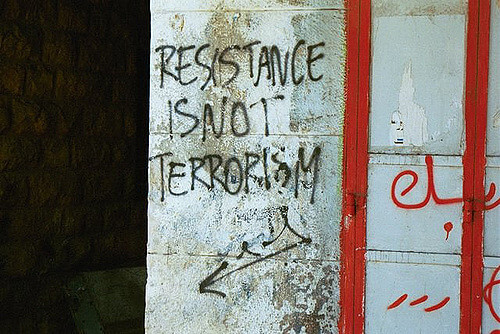 Since August this year, the trial of the so-called Petr Sova group has been taking place in the Czech Republic. Five people – two men and three women – are facing charges of conspiracy to commit an act of terrorism. The charge carries a sentence of 12 to 20 years in prison, with the possibility of a life sentence. The main proceedings have going on for six days now. One of the deciding factors in the court’s decision will be the interpretation of the role played by police agents. They infiltrated, and actively participated in, the group in autumn 2014. In order to understand the situation, however, we need to go further back.

In April 2015, the police arrested eleven people suspected of involvement in the vast Network of Revolutionary Cells (SRB). The arrests took place in Prague, Brno and Olomouc.

The SRB is, allegedly, a country-wide underground organization of anti-capitalist ‘terrorists’.

The media obediently published the police perspective and informed the public of an extremely dangerous conspiracy based on ‘informal relations’ and ‘affinity groups’ ; in short, the police claimed they intervened in the nick of time to prevent a terrorist attack. Only a few days later, however, most of the suspects were released for lack of evidence. Neither the police, nor the majority of public media, however, abandoned the rhetoric of terrorism.

Another example of the puzzling behaviour of the police during ‘Operation Fenix’, as it became known in the media, was the arrest of an activist in Olomouc. Fifteen policemen in full riot gear, armed with machineguns and dogs, stormed the two caravans in which the postgraduate student Tomáš Zelený lived. They confiscated his camera, laptop and phone, shackled him, and drove him to Prague for an interrogation during which it became clear that his e-mail communications had been under surveillance. The reason for his arrest, however, was simply that he runs a server that had published a communique released by the Network of Revolutionary Cells.  Tomáš’s previous transgressions include the illegal marking of cycle routes in Olomouc and other similar, non-violent acts. After two days in police custody, on a diet inappropriate for a vegan, Tomáš  was released and abandoned two hundred kilometres from Olomouc, without money or other resources. Though Tomáš has not been charged, the police never returned his laptop. Tomáš was fined for ‘lowering the dignity of police’, a crime committed when he was arguing with policemen in an attempt to retrieve his laptop.

This is not the only instance of the police misconduct and incompetence during the ‘Operation Fenix’ investigation.

Some of the suspects were, apparently, arrested at random. No connection has been established between the arrestee from Brno, who possessed detonators, and the other suspects, or the Network of Revolutionary Cells. This organization, or possibly just its name, was, and is, the primary concern for the police and the justification for extreme measures undertaken in the course of this case

The SRB first came to police attaention in 2013 and 2014 when several violent direct actions took place. Unknown assailants, referring to themselves as the Network of Revolutionary Cells, attacked a highway toll-gate, several police cars and a bank office. They issued a political communique with each attack and, although some of the attacks did more symbolic than actual harm, they caused several hundred thousand crowns’ worth of damage.  This caught the interest of the police. Undercover agents among the extreme left wing activists started snooping around. In 2014, the SRB targeted the owner of a restaurant called Řízkárna who, according to his former employees, refused to pay their wages. After the torching of several cars connected with that restaurant undercover police agents focused their attention on the anarchists participating in events around Řízkárna and it was in this environment they became aware of the group around Petr Sova.

Undercover agents infiltrated this group and are said to have instigated a plan to assault a train carrying military cargo.

The preparations for the attack, and work of the undercover policemen, ended in March 2015, when police arrested members of the group and initiated the media campaign on terrorism in Czechia. While the group was under surveillance, its members made and tested Molotov cocktails and buried a bottle of flammable liquid in the woods. The actions of these undercover agents, however, are problematic for several reasons. The initial infiltration of the Petr Sova group was justified on the grounds of the group’s ties to the Network of Revolutionary Cells. Those ties, however, have never been proven. Then there is the claim, made by the defendants that they were aware of the undercover police agents, and had played along in order to draw them out. Furthermore, the accused allege that the participation of the undercover agents in the group’s actions used police resources not for gathering incriminating evidence, but to actively instigate a supposed act of terrorism. Considering the fact that even the planning of such an act is illegal, that the undercover agents had a van and unlimited time at their disposal, it is said that the crime was primarily constructed by the police agents. The car supposedly used during preparation for the attack was provided by a police agent. Clearly, police agents never doubt anything that leads to the justification of their work. According to the accused members of the Petr Sova group, the attack itself was repeatedly delayed in the hope that the agents might reveal themselves.

The verdict in the trial is currently anyone’s guess. However, the fact that all of the suspects are being investigated without being detained may offer a hint. If the judge considered the suspects to be dangerous terrorists it would be unlikely that they should just walk free. On the other hand, it is clear that the preparations for a terrorist attack on a military train have, in fact, taken place. Ultimately it is up to the court to decide which story will be believed: the one told by suspects or the one told by undercover police agents.