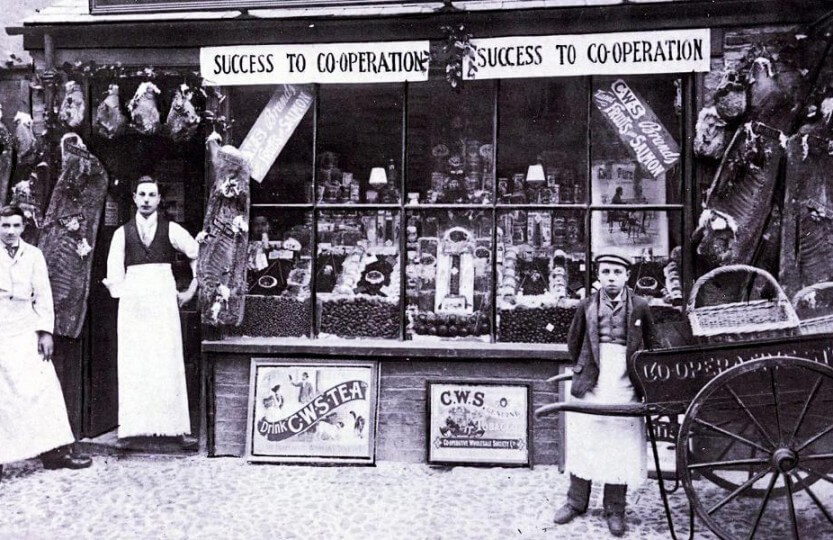 In recent years, more and more people have reached the conclusion that an economic system based entirely on competition is inadequate for our society. It creates deep inequalities and is incapable of ensuring a dignified livelihood. That is why we search for forms of economic activity based, to a larger extent, on cooperation. After all, it was cooperation that helped societies survive for millenia. One of its forms is the cooperative.

More and more people have reached the conclusion that an economic system based entirely on competition is inadequate for our society.

Organization from the bottom up

It is no coincidence that cooperatives appeared in the century of steam – technological progress also brought many new social problems. Farmers and craftsmen were unable to keep up with the rapidly developing cities and people began leaving the countryside. An important social innovation was born from this situation – the cooperative. Among its most important principles was the prioritization of people before profit.

This idea was foundational for the members of the pioneering cooperative in the English city of Rochdale. Its principles, dating from 1844, was so well set out that they are used by the International Cooperative Alliance (ICA) today, with small adjustments. Apart from democratic management, they also guarantee independence and tolerance of social, religious and other differences. The cooperatives’ activity was financed from members’ contributions, and a part of the profits always went to development and acquisition of equipment. Another portion of the profits went to the members themselves, but not on the basis of the size of their contribution, but depending on their engagement in the cooperative. Active involvement in the cooperative was a matter of course, and great emphasis was placed on systematic education. This system continues to be key for the successful foundation of all kinds of cooperatives around the world today.

Our part of the world did not lag behind. The Slovak Farmers’ Society, founded in 1845, became the first savings and loan cooperative in the world. Two years later, the Prague Foodstuff and Savings Society was founded in Prague. Thanks to the popularity of cooperatives, 1873 saw a legislative change, which spoke of “monetary and economic societies”. The idea of societies organized from the bottom up spread quickly and cooperatives swiftly sprung up everywhere. Cooperative efforts led to the building of the National Theatre, the Prague zoo or the chair-lift on Petřín Hill, among others.

“A farmer brought a cow, they managed its sale. Then, he bought what he needed – tools or soap.” That is a description of the warehouse cooperative in Telč by one of its employees. Cooperatives were also a defence against resellers. As described in Agricultural Cooperatives in Czechoslovakia by Ladislav Feierabend, a key figure of the Czech cooperative movement, they were founded by small and large landowners, and apart from providing space for the harvest to wait for more favourable prices, they also offered a financial advance. Umbrella and marketing organizations like Kooperativa, in which Feirabend served as director during the first Czechoslovak republic, were also founded.

Another important phenomenon were lending cooperatives – credit unions and savings banks. The functioning of credit unions is also described by Feierabend: “Its offices, often residing in an inn or school, would often consist of only a table, a few chairs and a safe. All of the administrative work was done by the members for free, only the treasurer (…) received a modest remuneration at the end of the year. (…) Despite their voluntary and amateurish character, the credit unions were effectively managed enterprises.” They were active predominantly in smaller municipalities, and by current criteria, we would call them social enterprises. Profits were directed to the support of activities beneficial to the public, from the planting of trees to the construction of buildings for cultural activities. Cooperative savings banks were of a more commercial character, but both of these organizations had enormous importance for the stability and prosperity of the countryside. Thanks to them, usury died out in Bohemia and Moravia, and many small farms and businesses which might otherwise have disappeared survived. At the beginning of the 1930s, the savings banks had over seven thousand members.

New cooperatives are founded by people who are not afraid to think and work not only for themselves, but also for the good of the public.

But many other types of communal institutions were also founded. There were housing cooperatives and cooperative manufacturing businesses (most commonly mills, bakeries, distilleries or dairies), as well as consumer cooperatives, which provided its members in cities with high quality and low price foodstuffs. Power station cooperatives were responsible for the electrification of many cities and a large proportion of villages. Many curious visitors from around Europe went on excursions to Dražice upon Jizera, which owned eight power stations and provided electricity for 29 cities and 460 villages. Pre-war Czechoslovakia was among the countries with the most intricate structure of cooperative organization and networking. This era of success for Czechoslovak cooperatives was interrupted only by the Second World War, after which a number of functionaries were persecuted or even executed. After 1948, the year of the victorious elections for the Communist Party, the cooperatives went through a transformation and lost their autonomy and democratic structure. A number of new cooperatives were set up during socialism, but they lacked not only independence and democratic administration, but also the entrepreneurial dimension which was so typical of the original cooperatives.

Consumerism and the Region

After 1989, the times were not partial to cooperatives. Most pre-war cooperatives did not have their property returned to them through restitution and many consumerist and manufacturing cooperatives disbanded. A separate chapter are the cooperative savings banks, which began to appear in the second half of the 90s, often in an effort to continue the famous communal tradition of the First Republic. Imperfect legislation, which, for example, allowed the transfer of assets to subsidiaries, as well as inexperience among the executive boards led to fraud, which undermined the public’s trust in credit cooperatives. Since then, stricter legislation forces the surviving savings banks into growth and commercialization. Today, therefore, most of them resemble small banks rather than cooperative modes of financing.

Some organizations, on the other hand, are returning to authentic cooperative principles and are attempting to apply the time-tested principles of putting people’s (and sometimes nature’s) interest before profit to the conditions of the 21st century. An example of this is the consumer cooperative Konzum in Ústí nad Orlicí. It has existed for 115 years, and it seems that Miloslav Hlavsa, the current director, sees the socialist period only as a transitional episode in the long life of his organization, which today counts over four and a half thousand members. By giving preference to local products in their stores, he not only supports high quality goods, but also the environment and employment in the region. The cooperative is trying to keep its stores open in smaller villages, and in ten of them, it even operates post offices that would probably close otherwise. “The owners of a joint-stock company are often miles away from where their company works, and don’t personally feel the repercussions of its actions there. It then becomes much easier to behave aggressively and indecently… We, on the other hand, are active in our own region, for which we want the best. We live here ourselves, after all,” says the director of Konzum. In keeping with the principle of mutual assistance between cooperatives, Konzum recently helped the newly established First cooperative Mandava, which has its base in Varnsdorf and aims to develop the local economy and improve the economic situation in the economically deprived area around Děčín and Šluknov in North Bohemia. It organizes markets, promotes regional goods and is currently planning its own store.

New cooperatives are founded by people who are not afraid to think and work not only for themselves, but also for the good of the public. They know that the future of society depends on mutual solidarity and cooperation.

The article originally appeared on A2larm.cz

This text was written as part of the SUSY project – SUstainable and SolidaritY Economy.

Nadia Johanisová and Markéta Vinkelhoferová
Nadia Johanisová lectures in the Department of Environmental Studies, Faculty of Social Sciences, Masaryk University, Brno. Markéta Vinkelhoferová is an employee of the Ecumenical Academy, a Prague-based NGO. Currently she is in charge of the European SUSY project - SUstainable and SolidaritY Economy.
> see other articles <