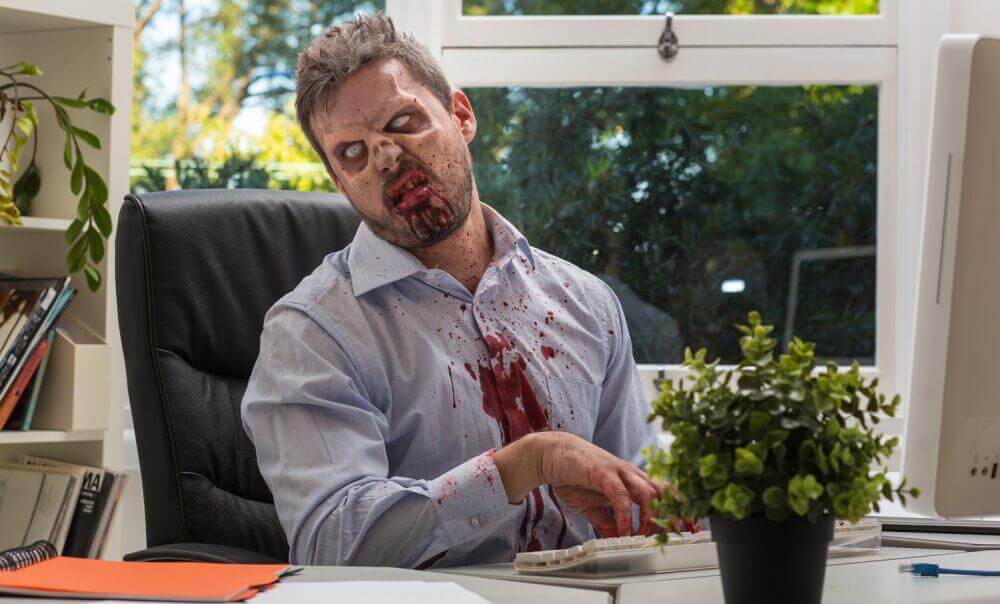 “He who does not work should not eat” is a popular Czech expression. It appears that after several centuries of being imprisoned in the iron cage of production, work has become our main means of measuring our worth. Should we not work, we would feel like trash – in addition to the people around us looking down on us. But is it not the time to change that? What if we simply refused to work?

The difficulties connected to maintaining a position in a (well) paid job are ever-present. Just listen to the conversations of people at any pub. Who has the boss screwed over now? Howcome I will not have enough money to pay my rent even after several weeks of slaving? Where can I get a better job? What can I do when a friend or colleague stabs me in the back? According to statistics, we receive eight thousand e-mails a year on average. Just answering them takes roughly 900 hours, which begs the question of whether there is any meaning whatsoever in all this toil.

Most workers fall into the category of the not engaged worker, braving the depths of working hell just to not end up on the street.

A world-wide survey performed by the Gallup Institute divided employees into three categories: The engaged (13 per cent), the not engaged (63 per cent), and the actively disengaged (23 per cent). The engaged employer is a regular worker hero in the Soviet sense: He slaves away so the company he works in is successful, because he considers the good of the organization inseparable from his personal life. Most workers, however, fall into the second category – they brave the depths of working hell just to not end up on the street. Work has lost any sense of meaning for them, and they often suffer from so-called “presentism”: While they are physically present at the workplace, they burnout they are experiencing is so intense that they (often) ignore their work performance, and suffer through their working hours.

Additionally, there is a third group that not only hates their job but also actively sabotages it. An example could be the lawyer who took a dump into the liquid soap bottle, mixed it with the bottle’s contents, and let other employees in the company use it to wash their hands. While this is certainly bizarre, it is far from uncommon: Employee-saboteurs keep thinking up various means to hurt the company, a company where they are doomed to toil. They steal things from offices, intentionally damage the organization and the work of their more ambitious colleagues, and upon realizing this attitude gets them nowhere, they fall back on self-harm, drugs and even suicide. All in all, work has affected our lives to an extreme extent, even if we happen to hate it; these days, instead of “I, human,” we might as well think of ourselves in terms of “I, work.”

We literally live by our jobs, which destroys the social status of people connected to non-profit activities, art, religion or raising children.

The British professor Peter Fleming, who studies workplace conditions, claims that our jobs have become the center of our lives: “We face an omnipresent ideology of work constantly telling us the only thing that matters is whether we have a paid job. We literally live by our jobs. This, naturally, destroys the social status of people connected to non-profit activities, art, religion or raising children.”

Why has work overtaken our lives? And how are all the currently fashionable hate-speeches about “slackers” and “social security parasites” connected to work? Maybe it is the fact that for many of us, work has simply become senseless.; we lost our faith in providing security, professional pride, and/or the feeling of stability. All it took for us to see the light was low salaries, arrogant bosses or the loss of faith in a better future. But more importantly, we also must not be allowed to think that it is possible to get by without working. “You must work!” is the message repetitiously conveyed by the ever-present work ideology. Even if we are badly paid, even if we hate our job, even if the job ruins our health, the goal is for us to set our doubts aside and discipline ourselves in time for the next shift.

Is there a way out? One possible answer is suggested in the book The Refusal of Work: the Theory and Practice of Resistance to Work (2015). In the book, stories of people who decided to intentionally lower their workload or leave the job process completely are told. These brave souls realized that there is no point in slaving away as a bank clerk, a copywriter,  or as a call center slave. They tried something different. One of them states the following about work culture: “We all know that the so-called good life is the primary cause of our stress and bad health… People start their day in a traffic jam or stuffed in a bus and spend the rest of it glued to a computer screen, performing tasks that could just as easily be handled by a trained monkey.”

Adventurous souls who intentionally decrease their workload or quit their jobs know that without broad social changes, their efforts are merely isolated acts of resistance.

These people who decided to resist work are refuting the idea of toiling away from dawn till dusk as the norm. But they do not have it easy; they often face scorn and ridicule,  and in order to avoid resorting to engaging in theft to survive, they are forced to be creative when it comes to securing a means of living. Some of them were lucky enough to have earned enough as IT men or managers to kiss their jobs goodbye and retire to the country. Others, however, have plenty to keep them busy and combine various ways of earning, like occasional jobs, subsistence, and participating in various mutual help and solidarity groups. One thing, however, is a commonality amongst all of them: With a lower workload their needs have decreased, because they no longer have to compensate for workplace frustration with consumerism. In addition, they know how to make and grow plenty of resources on their own. They view time differently; many of them spend it making art and regard the life of “normal people” as absurd: “You slave away five or six days a week, then you are burned out and have to rest or take a vacation just because you need to recuperate in order to work again. And again and again and again.” But even these adventurous souls know that without broad social changes, their efforts will remain as mere isolated acts of resistance.

In which form should such change take? One of the options is fighting for shorter working hours and simply sharing some jobs, an approach that is being experimented with in Canada, where employers of a company that needs to save money can switch to a shorter working week, with the state compensating for part of their salaries. It also seems that European countries with shorter working hours are – paradoxically – more productive since the workers there are not as tired and burned out.

A guaranteed universal basic income would give work a meaning again, we would no longer have to slave away in order to survive.

Another option is a universal basic income that would – on a sufficient level – take away the necessity of working. While there is still plenty of questions surrounding the idea of a guaranteed basic income, it has a large advantage, for it would make work voluntary. We would no longer have to slave away in order to survive, and could instead spend our time on activities that satisfy us. People would be given the means to live or develop their own businesses. And work would have a meaning again because plenty of degrading, redundant and life-wrecking jobs would cease to exist.

If there are people that still believe that without paid work and the constant pressure to eke out one’s living the human race would degenerate, they are horribly wrong. This idea was refuted by the famous British mathematician Bertrand Russell in his now legendary text In Praise of Idleness. According to him, should we find ourselves with nothing to do with our time after a four-hour workday, it would mean “a condemnation of our entire civilization”; our capacity for play and joy, then, would be irretrievably destroyed by the cult of performance. But things might not be all that bad, as Russell puts it: “Without a considerable amount of leisure a man is cut off from many of the best things. There is no longer any reason why the bulk of the population should suffer this deprivation; only a foolish asceticism, usually vicarious, makes us continue to insist on work in excessive quantities now that the need no longer exists.“