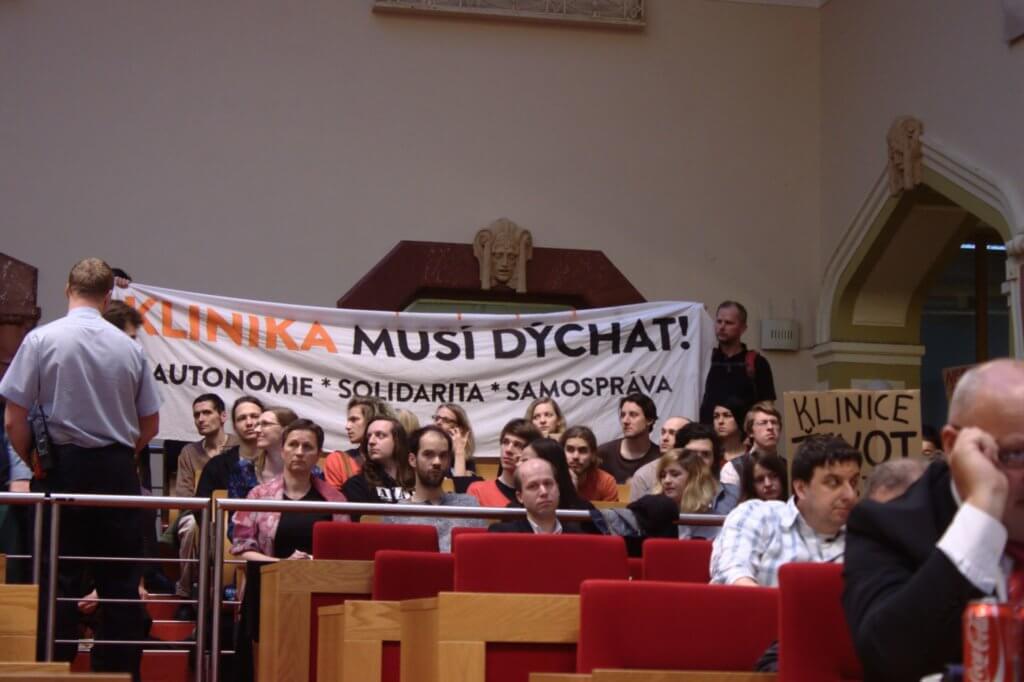 ‘Klinika’ is a squatted social centre in Prague, currently the only one in the Czech Republic, and also the first in the country’s history whose fate has not been arbitrarily resolved by the police. Instead, it’s continued existence has been decided in court, through its interactions with the public, and the state institutions in possession of the building. The squatters were first evicted after only ten days of occupying the building, but after months of campaigning, they won a year-long rent-free lease from the Office of Representation of the State in Property Affairs (UZSVM).

After the renewal of the contract was rejected on dubious grounds (the decision is currently being contested by the Klinika collective in court), the occupation of the centre continued. The following months saw a period of heavy fines, persistent threats from the state and a couple of anonymous bomb threats in the building, which spurred the involvement of the police and the further complication of Klinika’s status. In the latest turn in this dramatic story, the building’s ownership has been transferred to another state institution – the Administration for Railway Transport (SŽDC). SŽDC has consequently sought to exploit mainstream confusion over squatting and impose its control of the building, regardless of legal procedures and the large communal support for the autonomous centre.

The unfolding conflict has since raised questions over the balance of power between institutions and the community, a question repeatedly faced when people assume their right to shape spaces autonomously, according to their own needs. The following text is an analytical summary of the conflict between SŽDC and Klinika, through a squatters’ perspective.

When our building was ‘taken over’ by a new owner – SŽDC – we were still confident we had quite a few strong arguments for keeping our house. Above all, we had official confirmation that no project existed or was being prepared to replace our autonomous social centre, Klinika. This confirmed the validity of the argument appreciated by the general public, that if we were to be evicted from the building, it would once again be left abandoned and let to rot indefinitely.

However, SŽDC quickly came up with their own proposal – to turn the building into offices for their employees from the geodesic department, who are currently spread across various rented spaces. Klinika has a pending court case contesting the non-renewal of our rent-free contract with our former owner. However the new ‘owners’ showed no intention of waiting for this case to be resolved, going on the offensive without any hesitation.

The already trivial argument that we are here illegally was re-launched.

This is an argument that conveniently omits important nuances, such as the pending court case, which make such claims quite dubious.

Nevertheless, it strikes an emotional chord with Czech society, which seems to have mostly accepted capitalist conceptions of property and its sanctity. So far, Klinika has successfully resisted this argument, but this time it was coupled with a claim – namely, that SŽDC wil to take care and make use of the building – made up to brush off our main argument in the eyes of the public.

I use ‘made up’ intentionally, as there is quite some evidence which suggests that this transfer of ownership to SŽDC is just a political manoeuvre, putting us in the more assertive hands of the new owners, in order for the Klinika collective to be evicted.

After all, SŽDC had no idea whether or not the building is suitable for offices when they were taking it over (hint: it isn’t). Not having seen the building from the inside before, which made it difficult to make specific reconstruction plans, SŽDC’s announcement may seem a little hasty. Neither have they requested permission for the necessary change to the property’s zoning plan, which usually takes years to happen. The refurbishment cannot start without it. Such changes in Prague’s zoning plans are open to citizens’ contestation, which might make them impossible (without significant political manoeuvring behind the curtains).

Furthermore, we knew quite well that our house is far from being in a good state for their purposes and they would need to spend large amounts to bring it up to institutional standards. Precisely because of this, we had argued that SŽDC – also one of the biggest property owners in the country – could have taken any other empty, state-owned building, as they are many of them and in much better shape than Klinika. No one on the outside, however, questioned their bold approach, as if everyone else was automatically assuming they must have it figured out to make such claims.

Given the significant contradictions and difficulties facing SŽDC’s dreams of shiny new offices, one cannot help but suspect a political motivation behind the transfer of ownership.

However, made up or not, SŽDC’s claims had an effect on all sides. They brushed off any attempts for talks between us, while carefully avoiding the issue getting politicized. They have also threatened us with fines, although these are not realistically enforceable, and stepped up demands for us to hand over the keys and leave.

Then came their latest move – to request access to the building for purposes of passportization (meaning taking measurments and checking the state of affairs relating to electricity, fire security, etc.) and, once more, demand the keys. In light of their campaign, claiming persistently that we are blocking them entry to their property (we actually offered them to have a look earlier), and with our arguments often falling on deaf ears in the media, we decided to let them in. After all, we didn’t want to give them a cheap excuse to call a security agency or the police to come and evict us. Neither did we want to play into an antagonism they unnecessarily but quite consciously created.

On 14 December, when SŽDC was about to visit us and make a show, pretending that it is taking steps towards the refurbishment of the building, we invited our supporters to come for breakfast and a movie screening of a squatters’ favourite – Pipi Longstocking.

Early in the morning, the house was already packed with people, enjoying themselves and waiting for the bureaucrats. The media were also lined up outside our doors, eager for some conflict to cover. We ourselves did not believe things were going to escalate too much, but one can never know how and when SŽDC are going to make good on their rhetoric.

When the clock hit nine, the time of their supposed arrival, no one was in sight. Rumours had it that there is tension due to our event. Upon calling SŽDC, it turned out their representatives decided to have a meeting, and would be half an hour late. The freezing media crews were certainly unhappy about the missing bureaucrats, who finally came an hour later than announced, evidently anxious about showing up in front of the cameras and the crowd of supporters inside.

They really seemed to be on their toes, acting quite unpleasantly towards everyone, using as few words as possible. The aggressive confidence they demonstrated so far was nowhere to be seen. All of a sudden, power was clearly on the side of the collective and community than with the bullies at the helm of SŽDC.

Essentially, the ability to call the shots lies in the perception of power.

Our example illustrates precisely that. However, an important point to make is that I am speaking only of discursive power. The whole story was basically about who will have enough public support to have their demands met. It would have been a different conflict had SŽDC deployed their resources and, say, called a security agency to evict us.

Now, obviously they did not believe they had the power (in the eyes of the public) to do such a thing. Not against a strongly pacifist community. Which is why they pretended to have rightful claims to take over the building, that they know what they are doing and we are truly in their way.

And that is when, despite having all our arguments ignored so far, people came together in a brilliant display of community, strong enough to crack the discursive power SŽDC had generated, and show where power really lies. Occupying together the space where we have chosen to meet, debate, share food, stories and skills. At the end of the day, this is something more important and legitimate than giving this building to its owner.

Nevertheless, we should not forget the material power this institution possesses. They have their budget (importantly, made up of public money), their properties and law-inscribed privileges. And while we had to dig up Klinika from the waste of capitalist society, believing that people need such a centre and would build the power to protect it (as they did), our new owners could just ask for it and get rights over the building. This is sufficient to make such a conflict quite uneven, as we’ve seen with our arguments being brushed aside, even if they should be addressed, regardless of whether people like our politics or not.

But perhaps what we saw on 14 December is that in fighting this imbalance of material power, the victories we can gain via ‘discursive power’ are important and themselves powerful. We live in increasingly precarious times, marked by massive social inequalities, and while Klinika represents a very small, local issue, its example reminds us where power really lies and how we can turn the tide.

Michaela Lovak
Michaela Lovak is a squatter, writer and idealist from the Klinika collective who believes in the people's right to the city.
> see other articles <