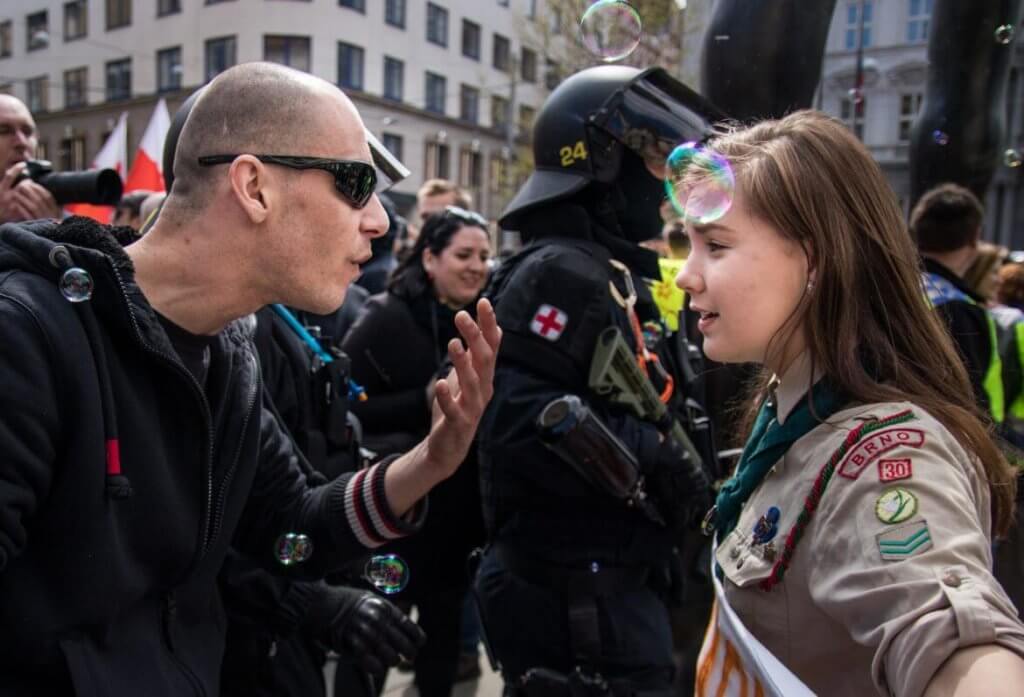 The Czech DSSS (The Workers’ Party of Social Justice) has organized May Day marches in Brno every two years. In 2011, they tried to march through Cejl, a street inhabited mostly by members of the Roma community, but were met by a blockade of three thousand of Brno’s active citizens. 2015 saw successful mass blockades on Malinovský Square and other spots on the DSSS route.

This year, the Brno Blockade initiative opted for a change of strategy. Instead of blocking a small group of neo-Nazis, they issued a call for people to join the Kdo si hraje, nehajluje[1] event, in which they invited people to protest in a playful manner, without a centrally organized demonstration. The success was unexpected. Hundreds of people came out to make public their opposition to fascism, choosing a wide variety of creative forms of expression. Some played guitars and sang, a group of samba drummers kept everyone bouncing in a laid-back beat, cyclists circled the neo-fascists with placards that transformed Nazi chants into pro-cycling slogans. A little further away, people danced swing, handed out halva – there is not enough time to list all of the inventive ideas. DSSS members were outnumbered by about 2 to 1.

I went to the centre mainly to take pictures. As a photography aficionado, I’m a fan of protests: the shots make themselves, you just have to be constantly on alert. With this photograph – now world famous – I failed: a friend had to alert me to the exchange between Lucie and a DSSS supporter. I wasn’t far away, so I turned around, walked a few metres and started shooting.

A sixteen-year-old scout decided to manifest publicly the values scouting has led her to adopt. She came to play, to shun the Nazi salute, to make a clear stand against fascism. Holding a placard with the scout logo and the words “We’re bringing up your children too,” she looked the DSSS supporter in the eye and tried to explain to him the senselessness of nationalism and of dividing people according to arbitrary social constructs like nationality.

He did not agree.

Evidently upset, he gesticulated wildly while shouting at her. She stood her ground, smiled and explained. It did not come to a physical confrontation, though I was a little worried it might. Later on, I felt the fist of another “decent Czech” on my own face. We’d brought fun, they’d brought threats and assault.

Scouts from around the world started sharing it amongst themselves and shortly afterwards, they asked me for permission to publish it on the worldwide scouting website.

While shooting, I immediately recalled the recent viral photograph taken in Birmingham. The situation was very similar. When the soap bubbles arrived on top of that, I was duly excited by the shot’s potential. But I wasn’t expecting what came next. In the evening, I gave the picture a quick edit and posted it on Facebook, for my friends. The only media to make use of it then was the Brno-based online daily Deník Referendum, to which I’d contributed photographs in the past. After Shooty, a Slovak illustrator and satirist, asked me to share the photo publically, it spread fast. Scouts from around the world started sharing it amongst themselves and shortly afterwards, they asked me for permission to publish it on the worldwide scouting website. Then came requests from a variety of periodicals: The Washington Post, IBTimes, CNN, The Guardian, Der Spiegel, El País, AJ+, ARD (and many more). I only got word from the Czech media after they noticed the picture’s international impact.

I felt immediately the power of the photograph, a power which it has, more or less, of its own accord. I didn’t expect it to circle the globe. If it motivates more young people to take a clear, courageous and public stand against hateful ideologies, it’ll be the happiest coincidence that’s ever happened to me.

[1]Literally He who plays does not do the Nazi salute, a play on the Czech saying Kdo si hraje, nezlobí – He who plays is not naughty

Vladimir Cicmanec
He is an amateur photographer and member of the editorial team of POLE Blog.
> see other articles <