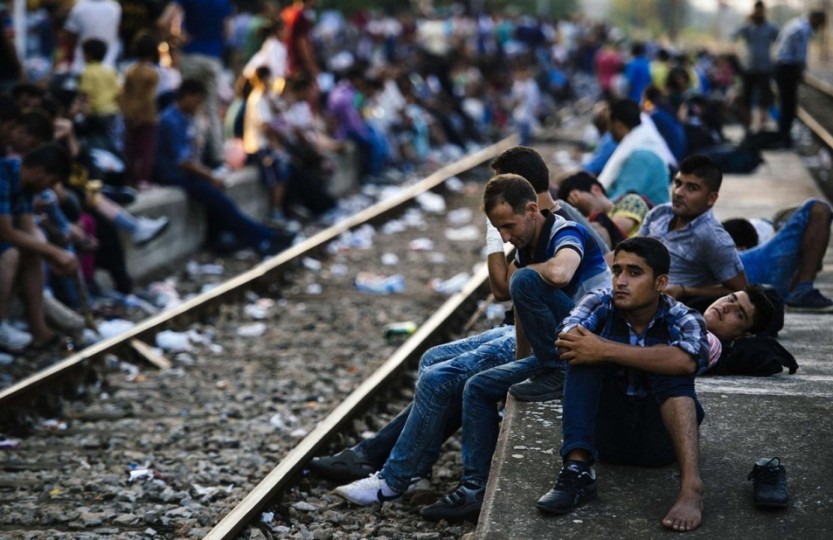 In the past months, Hungary has become probably the most striking embodiment of a restrictive European migration politics and, to a large extent, also European humanitarianism. Hungarian anti-immigration tendencies have in the past weeks been represented in particular by the loudly proclaimed project of building a four metre-high fence along the whole 175 kilometre-long border between Hungary and Serbia. Estimates of the cost of this barrier, which is being built by the army and prisoners, are up to 100 million Euro. The aim of this populist gesture is to prevent the arrival of tens of thousands of refugees, in particular from Syria, Afghanistan, and Iraq, who according to Prime Minister Orbán represent the destruction of European civilization and threaten the cohesion of the Hungarian nation, as well as the Hungarian economy, legal order, and security.

It is true that in 2014, Hungary ranked second after Sweden in the number of requests for asylum per person. And this number rose even further in 2015, when by the end of June, 103 000 refugees had applied for asylum. These numbers are truly surprising in comparison with, for example, the Czech Republic, where only about one thousand people sought asylum in 2014.

The example of Hungary shows that in our efforts to offer an alternative, it is necessary to move beyond the humanitarian discourse of salvation and pity elicited by the greatest wave of migration since the end of the Second World War.

Orbán’s misuse of the topic is an evident attempt to stop a decline in his popularity and to hide more pressing political and social problems (such as the expansion of the Paks nuclear power plant, which is to be carried out without an open selection procedure by the Russian state nuclear energy corporation Rosatom and financed through a Russian-backed loan of 10 billion Euro). Especially if we realize that of these tens of thousands of refugees, only a negligible number are interested in staying in Hungary.

According to the Hungarian Helsinki Committee, 80-90 % of the refugees leave within a few days. In this context, the building of the fence can only be seen as a spectacle through which the state is attempting to sustain the myth of sovereignty, rather than a truly effective tool of control. As for example Mohammed from Syria confirms in a recent interview for Al-Jazeera in Szeged, such barriers cannot stop the mobility of people and the only thing they achieve is complicating the journey for refugees and migrants and increasing the responsibility for their suffering.

The building of the fence is however only one step – albeit the most visible in the media – of a series of anti-immigration measures. The current Hungarian establishment under the leadership of Viktor Orbán has at least since January of this year portrayed refugees and migrants as a threat and expels them beyond the borders of “regular” society.

Another significant media event was the National Consultation on Migration and Terrorism. The state used questionnaires to ask citizens questions such as: “According to some, migration, which is not being managed well by Brussels, is connected to the expansion of terrorism. Do you agree with this opinion?” Not only political and human rights activists, but also leading social scientists criticized the skewed methodology on which the consultation was founded. The absurdity of such open xenophobia is evident already from the fact that only about twelve percent of the roughly eight million distributed questionnaires were returned. This means that this event was refused even by a proportion of Orbán’s voters.

Part of the government’s anti-immigration strategy has also been a billboard campaign. Orbán sent out messages to refugees and migrants, such as: “If you come to Hungary, you must not take work away from Hungarians”. The populist nature of this campaign is evident from the fact that the text on the billboards was written in Hungarian.

The three above-mentioned acts are the most visible. But those that probably have the greatest effect on the lives of refugees in Hungary appear more in the reports of human rights organizations. Apart from some small changes to the asylum law, there is also the long-term trend of detaining asylum seekers. Orbán was forced already in 2010 by the European Court of Human Rights to modify the strict legal measures concerning these detentions. Even so, hundreds of asylum seekers continue to be detained. Although human rights agreements and court decisions make it clear that detention should be applied to individual cases and used as a last resort, in Hungary it is employed on a large scale and more as a rule than an exception. This is confirmed by the Hungarian Helsinki Committee in its report from April 2014, when 40% of men applying for asylum were detained. Moreover, detention is entirely arbitrary, only chance decides if a refugee ends up in detention or in an open asylum centre.

A new wave of solidarity

The open xenophobia of Orbán’s government has not remained without response and has elicited a wave of solidarity. This has taken on the form of political events, but mainly of unprecedented humanitarian efforts. One of the most prominent political events was a demonstration against the building of the fence organized by Migszol, a pro-migration group of refugees, migrants, and Hungarian citizens, on 14 July, i.e. Bastille Day. Around 800 people came to express their disagreement with this plan in front of the historical Parliament building. Similar protest meetings took place also in the spring in reaction to the above-mentioned billboard campaign. But these events are eclipsed by humanitarian efforts that are spreading across Hungary. The roots of this humanitarian solidarity can be traced to Szeged. The fourth largest Hungarian city is the first significant place that refugees encounter after crossing the border along the river Tisza. A local group, which took over the name Migszol from the above-mentioned organization, has in the past two months secured food, drink, and medical and psychological assistance to hundreds of people who arrive every day.

An advantage is also the fact that Szeged is the only key city not dominated by Fidesz. The socialist representation has provided Migszol with basic backing. The group has at least two hundred active volunteers and thousands of contributors, thanks to whom it can provide assistance twenty-four hours a day. Its functioning rests mainly on the volunteering and donations from a wide range of civil actors, including churches and entrepreneurs. This initiative has sparked a wave of inspiration in other Hungarian towns, such as Debrecen or Pecs.

The end of white superiority

Although this wave of solidarity is welcome, it has its limitations. The groups that have taken over the name of the original organization Migszol have depoliticized its content. Depoliticized assistance to a certain extent tends towards what the French philosopher Jacques Rancière calls humanitarianism. The refugee ceases to be an actor and instead becomes an object of our help/salvation. Humanitarianism is dominated by the metaphor of sacrifice. Although these groups endeavour to offer an alternative to the government, in the end their efforts lead to a similar objectification of refugees. And furthermore, the government’s xenophobic politics are not challenged.

Hungary is a good example of this trend, but the local movement is not the only example in Europe that also displays a similar humanitarianism. The Guardian recently described seven key movements in Europe that allegedly present an alternative to the prevailing politics of xenophobia and fear. Most of them however once again represent the logic of humanitarianism.

It is time to open up the possibility of building a European community that will be able to absorb mobility as its integral property.

Europe can however still offer an alternative. Since the 1990s, a radically democratic variety of pro-immigration politics has been developing. This could be labelled “No Borders”. The politics of this wide-ranging informal network of various groupings is different, as at its heart lies the activity of refugees and migrants themselves, who fight for their own equality. And it differs in its open politicization of citizenship, political community, and the control and existence of borders. Its activities mainly take the form of No Border camps, blockades of deportations, and events aimed at the abolition of detention centres.

The example of Hungary shows that in our efforts to offer an alternative, it is necessary to move beyond the humanitarian discourse of salvation and pity elicited by the greatest wave of migration since the end of the Second World War. This situation should conversely be used as an opportunity for truly transformative action, which would open up the possibility of a new, post-national understanding of the European community – an understanding in which the legitimacy of the state to control borders, deportations, detentions, and the classification of human beings into categories based on an arbitrarily defined legality will disappear. It is time to open up the possibility of building a European community that will be able to absorb mobility as its integral property. It is also necessary to begin building a truly democratic European community founded on the principles of equality, freedom, and fraternity for all, and not on a vision of a superior white civilization and the modern territories of nation states.

Jan Blažek
Jan Blažek is a doctoral candidate at the Institute for International Relations in Prague.
> see other articles <