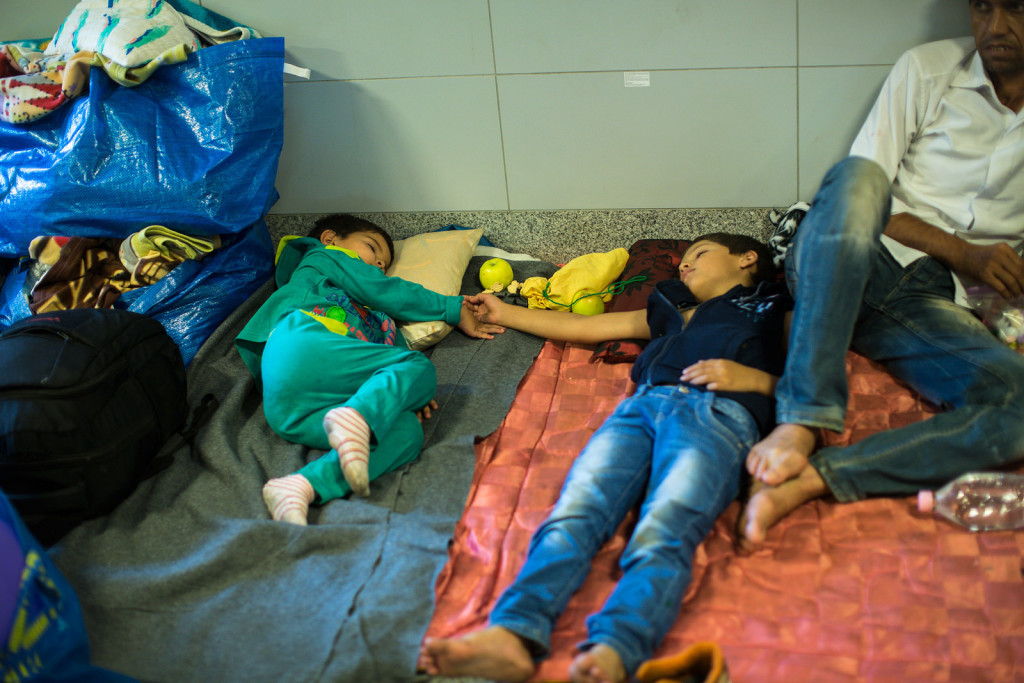 “Is Orr crazy?”
“He sure is,” Doc Daneeka said.
“Can you ground him?”
“I sure can. But first he has to ask me to. That’s part of the rule.”
“Then why doesn’t he ask you to?”
“Because he’s crazy,” Doc Daneeka said. “He has to be crazy to keep flying combat missions after all the close calls he’s had. Sure, I can ground Orr. But first he has to ask me to.”
“That’s all he has to do to be grounded?”
“That’s all. Let him ask me.”
“And then you can ground him?” Yossarian asked.
“No, then I can’t ground him.”
“You mean there’s a catch?”
“Sure there’s a catch,” Doc Daneeka replied. “Catch-22. Anyone who wants to get out of combat duty isn’t really crazy. . . .”

What the Hungarian Government is doing now, with the introduction of the new ‘emergency’ legislation is inhumane as well as legally absurd. It has created a situation in which it blocks the transit of refugees through the country. The government had the opportunity at the recent summit of EU internal ministers to accept an offer, where 54,000 asylum applications would be taken from Hungary, almost completely lifting the burden on the country. Orban and his government decided against this. They choose to “fight” against the refugees.

Instead of accepting a solution urged by the majority of EU member states, the government is choosing a Hungarian solution – or rather, a Fidesz [The current governing party of Hungary – trans.] solution

In order to get to Austria, refugees can now go towards Croatia, where in many places there are still fields of landmines on the Croatian-Serbian border.

Those coming from Serbia and filing an asylum request are asked whether they have already submitted a claim in Serbia. If the answer is yes, they are sent back to complete the procedure there. Those answering with a no have their applications rejected after a couple of hours of paperwork, on that basis that Serbia is a safe country. Serbia was declared a safe country by the Hungarian government and it was written into the law. Of course, you can appeal at the court in Szeged [the nearest city to the border – trans.] However, the refugees are not actually admitted inside Hungary, so they cannot get to Szeged to the hearing, neither can they stay in the country for the period of their appeal procedure. Additionally, the Hungarian government is using the opportunity to ban all rejected applicants from the Schengen zone for one year period. Just like my literature teacher who hated my entire class and deducted the maximum penalty points from everyone’s A levels for spelling and formal appearance.

So the refugees come to the transit zones, in line with the regulations. They are unsuspecting that the government will then commit all possible appalling proceedings against them that are they are able to.

The refugees are standing at the Hungarian border where the system in place is only able to process a few people a time. At the two designated transit-points there are two containers large enough to accommodate three or four people. New people are only let in when someone else has finished and left. In the meantime, hundreds of other refugees are waiting in the fields.

The Hungarian government forgot to provide a shelter for those waiting outside in order to comply with the asylum procedures. What a coincidence, that they also forgot to inform Serbia about the new regulations, putting relations between the two countries at risk.

Of course, in order to get to Austria, refugees can now go towards Croatia, where in many places there are still fields of landmines on the Croatian-Serbian border. Or they can cross the Dinaric Mountains, or the Alps. So in addition to the existing problems, we have also been able to incite a bit of a Serbian-Croatian border-dispute.

Can anyone call this anything but cruelty? You can despise the refugees, you can hate them, but they will still remain human beings. And you do not treat human beings like this, you do not screw with them this much.

What most baffles me in this whole thing is (apart from the fact that now we have a legislative base for Fidesz to treat any human being, including Hungarians like this) that Hungary could have chosen to do something else. It could ask for more help, and even outside the quota-system there would be the chance to ease the burden on us, and to treat these people humanely – at zero cost to us.

But Viktor Orban has a vision. He wants to be a ‘European level politician’, and to achieve this no conflict or suffering of people is too dear for him. He rather opts for cruelty, if this is what serves his political ambitions. And us: we are sitting here slowly and nicely accepting the Catch 22.