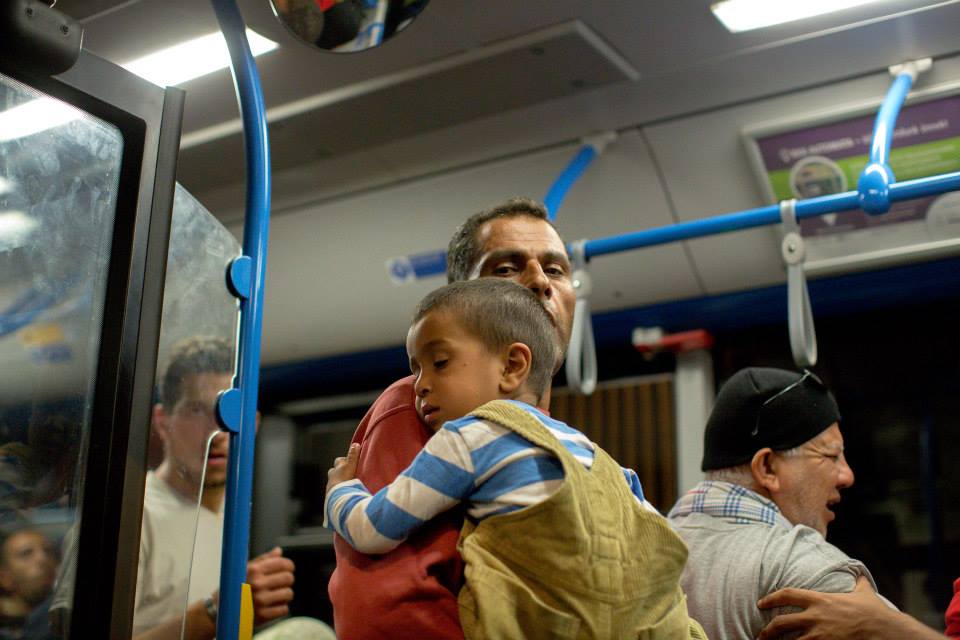 Veronika Pehe: Can you describe what is happening at Keleti railway station in Budapest right now?

Bálint Misetics: The situation changes every few days. Less than a week ago, hundreds of policemen stood in front of the entrances to the station, not allowing refugees inside. This was, I think, one of the most visible applications of racial profiling I have ever seen in Hungary, they checked the ID of everyone whose skin colour was not white enough. It was very tense and intimidating. Hundreds of people were lying in the so-called transit zone outside the station, children were walking around, policemen were shouting – a very disturbing scene. Every few hours, the people started protesting around the main entrance to the railway station. They chanted slogans mainly in Arabic, but also in English, about Germany, freedom, and how they want to leave.

The Hungarian government is currently not providing anything for these refugees at Röszke, the only “service” they provide are lines of policemen who are not allowing them to leave.

Then on Friday, the “March of Hope” towards the Austrian border took place. I think that was an extremely liberating experience, especially in comparison to the waiting, the tension, the over-crowding, and the oppressive police presence at Keleti. It was an excellent example of what Martin Luther King and other advocates of non-violent resistance spoke about: if you have a very tense situation, you need to provide a non-violent outlet for this tension and I think that is what this march was about. It also created a crisis that put the Hungarian, but also the Austrian and German governments into a situation where they were essentially forced to do something. I don’t know to what extent this was the effect of the march itself, and to what extent it was the result of hidden diplomatic debates, but in any case, that day the Austrians opened the borders for refugees to cross over into Austria and to travel onwards to Germany. At the beginning there was a lot of fear that this would only last for one or two days, but it has now been going on for several days and it changed the situation completely. There are less people at Keleti station now and most of them are just waiting for the next train – the situation is calm.

The real crisis now is at Röszke, on the Serbian border, where refugees are registered. The registration centre itself is overcrowded, and there are hundreds and sometimes thousands of people outside the centre, in the nearby fields, where they are forced to wait to be taken to the centre by buses. The nights are not warm anymore, and you have hundreds of families there, often with children and babies, under the open sky. A lot of volunteers went there and brought tents, blankets and sleeping bags, but when you have a problem of this magnitude with thousands of people sleeping in the fields in a temperature of four degrees, it is not something you can solve with a few blankets.

is a regular contributor to Kettős Mérce and a doctoral candidate in Political Science at Central European University.

Who is actually providing and organizing support for the refugees?

The Hungarian government is currently not providing anything for these refugees at Röszke, the only “service” they provide are lines of policemen who are not allowing them to leave. As a Kurdish refugee asked a Hungarian journalist: “What kind of state can send lines of policemen but not buses?”. Maybe twice a day the refugees break the police line, they start walking on the highway, and then at some point they are stopped and taken to the registration centre. It is an extremely tense situation. The scale of the problem is obviously beyond the reach of self-organized volunteers bringing blankets. You would obviously need the emergency response system of the Hungarian state, and in case of the state’s prolonged inaction, the UN High Commissioner for Refugees or Unicef and other large charity organizations, but this has not been happening.

Are the efforts of various voluntary organizations being coordinated in any way?

For the kind of situation we had for weeks, it was quite a well-organized system. As self-organized, grassroots volunteer initiatives, the efforts to help the refugees were quite efficient, and a lot of people participated, but this kind of system cannot really solve a situation like this. All these voluntary initiatives providing food, medical supplies, and so on for asylum seekers have been wonderful and very heroic in a sense, but it reflects badly upon how the state is handling the situation if you need heroes for small children to be given basic medical aid. And I think that one of the problems with these volunteer initiatives is that with all the enthusiasm about how helpful they have been – and they have – the most important message is being obscured, namely that the Hungarian state is not fulfilling its basic humanitarian responsibilities, which are not only of a moral nature, but are also established in international treaties. The situation at Röszke clearly shows the limitations of these volunteer initiatives because it is on a scale that only the state could handle quickly and adequately enough. Furthermore, whether people are being provided with adequate shelter, food and medical aid is a matter of justice and state obligations, which should not be left to the goodwill, free time and organizational capacities of the citizens.

We’ve been hearing a lot about the generosity and compassion of the citizens of Hungary, as well as Austria and Germany, but has there at the same time been any aggression towards the refugees?

What is visible is the compassion of the Hungarian people, which is of course very strikingly juxtaposed with the vicious xenophobia and petty political manoeuvring of the government. But then if you look at public opinion polls, you see that the majority, including the relative majority of supporters of those opposition parties that have taken a pro-refugee stance, believe that refugees pose a threat to Hungary. There is also a lot of harassment going on. Volunteers providing food are regularly verbally assaulted by other locals, and there have also been some attacks by far right-wing groups at Keleti railway station. The public is really polarized, however. When this situation started early in the summer with the government putting up posters with messages for the so-called migrants (but in Hungarian!), saying that if you come to Hungary, you have to respect our culture, not take jobs from Hungarians, and so on, there was an interesting upsurge in direct action and civil disobedience. And this was not only in activist circles, but amongst ordinary people, who tore these posters down or painted over them. So I think what is happening is that – and this is something we also witnessed with anti-homeless propaganda a few years ago – the government always needs to find a scapegoat. In this case it’s the refugees. But what the government is doing is so obviously inhumane that it encourages many to find a way to help or in any case to sympathize with the refugees, because the other position seems morally untenable.

So do you think this crisis might actually create a rift between the government and its voters?

What is visible is the compassion of the Hungarian people, which is of course very strikingly juxtaposed with the vicious xenophobia and petty political manoeuvring of the government. But then if you look at public opinion polls, you see that the majority, including the relative majority of supporters of those opposition parties that have taken a pro-refugee stance, believe that refugees pose a threat to Hungary.

I think that’s a too optimistic assessment. I couldn’t really show it in numbers, but I think there is a segment of society that is mobilized, not only by the crisis, but also by the accompanying government propaganda that they find outrageous. But on the other hand, there are also those who mostly receive their information about the world from state media and government-controlled outlets, and they are getting a completely different picture. The Hungarian state is interesting because there are certain elements of it that still work the way they should in a democratic setting where the rule of law applies, and then there are certain other elements that are completely dictatorial. The state media are a prime example of the latter.

This morning Jean Claude Juncker delivered his State of the EU address, in which he called for compulsory quotas for refugees. How do you think this might affect the situation in Hungary?

Here is something I want to stress: much of the media coverage is about how bad or inhumane the Hungarian government is and that what we are witnessing is not how a “European” state should deal with a humanitarian crisis. This is nonsense. It is true that the Hungarian government not only falls short its humanitarian commitments, but also explicitly incites hatred, and is building a fence with barbed wire to injure and deter asylum-seekers and passing increasingly punitive legislation in refugee and penal law. However, refugee policy is also morally outrageous at the European Union level. I believe there is a lot of hypocrisy on the part of Western European governments criticizing the Hungarian state, because it’s an easy target. I think that any chance of turning the Dublin mechanism into a more equitable system would be most welcome. For instance Poland, which is neither a transit country like Hungary, nor is it a preferred destination for refugees, is a prime example of a country that would not otherwise be forced to take any responsibility because of its geographical location, but should accept it because it is part of the European Union and also because it has the same obligations to other human beings in need as everyone else. But I should also add that in spite of all this misleading rhetoric about the burden of refugees in Europe, we should realize that most Syrian refugees, for example, are not and will never come to Europe, they are in Lebanon, Jordan, or Turkey. We need to put this so-called burden of receiving asylum seekers in Europe into perspective and we should think about how the EU can aid these countries which have a much lower GDP per capita but receive many more refugees. The response to the refugee situation should not only be Europeanized, but also more international.