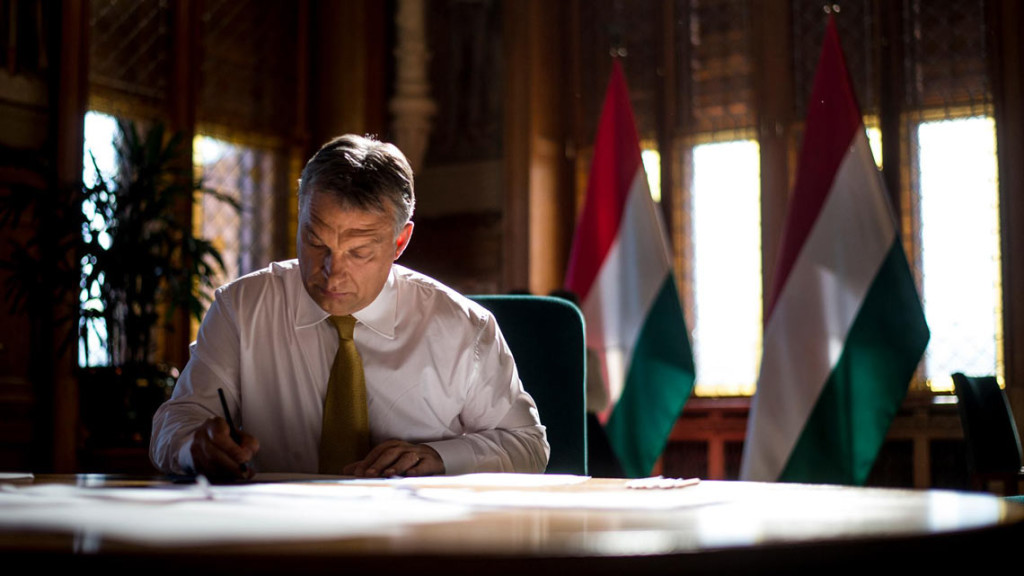 In the middle of January, the governing party of Hungary, Fidesz, proposed an amendment to the constitution in order to introduce a special state of emergency in the event of terrorist attacks. The Hungarian constitution already has five different special clauses for a large series of emergency situations, whose extent and application are well defined. Their introduction is linked to parliamentary decisions. The new state of emergency in response to terrorist threats is, however, much more problematic, as it would eliminate already existing checks and procedures and take advantage of a very loose definition of the concept of terrorism.

The proposed constitutional amendment gives excessive powers to the government.  Besides being able to rule by decree and to override existing laws, the government would also be allowed to deploy the army, to seize or ban media outlets, confiscate the funds of NGOs, and forbid contacts with foreign nationals. The amendment prescribes barely any parliamentary oversight; the government would be obliged to inform the head of state and a parliamentary commission of its actions, but that is all. Hardly an effective check, which is made even more problematic by the fact that the media would also be disabled from controlling executive action.

What happens if tens of thousands of protesters camp in front of the Parliament, peacefully resisting police action to disperse them? Would that count as a terrorist threat?

In the last two years, there were five occasions when the notion of terrorism was invoked by the government: once in the case of two extreme right-wing activists, once in relation to a couple of young gun enthusiasts collecting World War II relics, and once in the case of refugees who tried to break through the fenced borders of Hungary – in the latter two cases charges were dropped. The government also spoke about terrorism when protesters demonstrating against the introduction of an internet tax threw IT hardware at the Fidesz headquarters in the autumn of 2014. And finally, when two activists of an opposition party climbed onto the balcony of the presidential palace protesting against the nuclear deal between Orbán and Putin, they were also accused of terrorism.

These examples make it clear that the threat of terrorism can equally well be a real danger to human life and an artificial construction of political language. And at this moment it seems that the new amendment may enable the second use of terrorism, in which the government could invest itself with full powers in various situations in order to serve its own political purposes. Such worries are completely founded, given that the European Court of Human Rights has recently ruled against the Hungarian cabinet, declaring that the regulations allowing the Hungarian Anti-Terrorism Centre to wiretap citizens indiscriminately, without judicial oversight, is and infringement upon fundamental individual rights.

In it its current form, this proposal exploits the danger of terrorism that Europe faces, and, in effect, exploits the victims of various terrorist attacks.

What happens if tens of thousands of protesters camp in front of the Parliament, peacefully resisting police action to disperse them? Would that count as a terrorist threat? It is completely imaginable that the Prime Minister and his circles would say so, and based on the new amendment they could deploy the army against them, or close the media outlets that reported on the grievances of these ‘terrorists’.

In it its current form, this proposal exploits the danger of terrorism that Europe faces, and, in effect, exploits the victims of various terrorist attacks. It misuses this situation in order to assist the government in infringing on democratic rights, on the right of citizens to obtain information, or to resists with legal means the actions of their own elected government.

The state of emergency is not a novel measure in democratic constitutionalism, it exists in most countries as a set of mechanisms to address natural catastrophes or situations of war. These are tightly regulated – in the Hungarian case they can only be declared by the Parliament, and in extreme cases by a qualified majority. The new amendment, however, makes it possible to declare a state of emergency even in peacetime, through a simple decree of the government.

We have every reason to be cautious about every occasion when a government tries to invest itself with extraordinary powers, as every time it is the citizens who lose out. Be it the French government’s unjustifiable suppression of protesters during the recent climate summit, or the ‘crisis situation caused by mass migration’ declared last autumn by the Hungarian government, every such case supports our fears. Á propos, the ‘crisis situation caused by mass migration’ – a pseudo-state of emergency, introduced by Orbán in September 2015 – is still in effect in Hungary despite the fact that the number of refugees trying to enter the country is next to nothing ever since wire fences were erected at the southern border. Fidesz, in effect, is breaking its own laws and regulations by maintaining this pseudo-state of emergency. Can anybody be blamed for not being too enthusiastic about the proposed amendment?