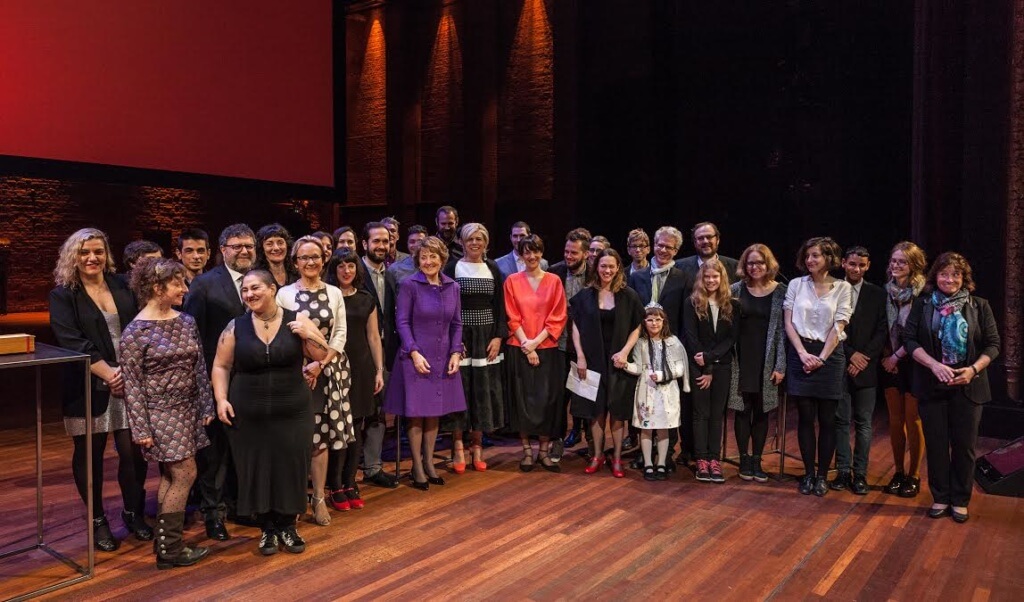 This year the Krétakör Foundation received one of the most prominent cultural acknowledgments of the continent: the European Cultural Foundation’s (ECF) Princess Margriet Award for Culture. Krétakör was awarded the prize for its artistic and social work, which has not been acknowledged by the Hungarian government. A few days after the award ceremony, a comprehensive tax audit was started at the Foundation: this is yet another example of how the Fidesz government, which gained power in 2010, is trying to make the life of Civil Society Organizations (CSOs), which do not fit their notion of society, impossible.

The jury of ECF highlighted how Krétakör has successfully transformed from a theatre company into a social forum where students can discuss issues that they wouldn’t otherwise be able to.

Krétakör was founded in 1995 by Árpád Schilling as an independent theatre company. Ten years later Krétakör became one of the most successful companies in Hungary, and has put on performances across the world. However, in 2008 the founder disbanded the company, so that Krétakör could work to combat different social issues in a more direct way rather than by showcasing plays. From this period onwards, there have been plays reacting directly to the Hungarian state of affairs (Korrupció/ Corruption and A Párt/ The Party) and Krétakör has started to work more and more with students. They have visited schools and worked with drama teachers and education professionals, and have focused on different themes such as democracy, the problems of society’s outcasts, prejudices against the Roma, migration and homelessness.

During the award ceremony in March, the jury of ECF highlighted how Krétakör has successfully transformed from a theatre company into a social forum where students can discuss issues that they wouldn’t otherwise be able to. They not only have the chance to question their own prejudices but also become critical and self-conscious members of society, which is particularly important in opinion-divided Hungary and Europe. However, the European significance of the Princess Margriet Award, the appreciation of Krétakör’s work by Dutch princess Laurentien, and Chris Dercon, the director of Tate Modern are all in vain, as the Hungarian government could not even afford to issue a press release. Shortly after the award ceremony a two-year long VAT-audit was started at Krétakör. The justification of a tax audit normally would not be questioned by the Foundation but it is suspicious that another tax audit, focusing on the same period, had finished just a month before, and had found everything to be in order. A comprehensive audit does not only entail serious costs, but it risks paralysing the work of a small organization, such as Krétakör. The claim that the constant inspections have something to do with Krétakör’s thinking about social issues differing from those of the ruling party does not seem to be a groundless assumption.

Since its landslide victory in 2010, Fidesz has started to eliminate different types of autonomies and to exclude those whose opinions differ from theirs from public life. This has not been limited to political opponents (for example the re-writing of electoral law in order to favour Fidesz ), but also the adopting of a new media law , the radical reduction of amounts of money invested in, and the takeover of formerly independent institutions, all of which are making the lives of civil organizations impossible.

New legislation regarding the Nonprofit Act was introduced by Fidesz at the end of 2011 with no prior discussion with stakeholders. This new legislation has decreased the amount of financial resources to be allocated to CSOs by two thirds, and has also  transformed the framework of the organisations responsible for allocating these funds. The projects, which were previously handled by the CSOs such as environmental protection, homeless care, patient care, education, culture, etc. have been taken over from the National Civil Basic Programme / Nemzeti Civil Alap (NCA) by a body with a telling name: the National Cooperation Fund /Nemzeti Együttműködési Alap (NEA). Under the direction of NCA, representatives of civil organizations made up the majority of the professional associations, which were responsible for the allocation of funds. However under the NEA’s leadership, the delegates of the governing party have a two-third majority, and ministers also have the power to directly allocate ten percent of the funds. The law, which was adopted in 2012, has made civil life more vulnerable than ever. At this time, the only significant organization free from the government’s influence, from where the civil organizations could get funding in Hungary, is the EEA/Norwegian Fund (NCTA). Norway created the EEA/Norwegian Fund in order to help social and economic development in the less prosperous European Union member states. Part of the Fund is the Civil Support Fund, which aims at helping to develop civil society and strengthen its participation in shaping democracy.

By the end of 2013, the government press started writing that certain civil organizations in Hungary, which have conflicting values to the government’s official policy, are “chamberers” of George Soros and the EEA/Norwegian Fund. In reaction to this article, Péter Hoppál, the spokesperson of Fidesz, talked about pseudo-civil organizations that are being funded by foreign speculators in order to ruin Hungary’s reputation abroad. For example, Hoppál mentioned the Hungarian Helsinki Committee, a civil legal advocacy group, which has been defending human rights since 1989, and this was followed up days later with the court passing a sentence on the Fidesz spokesperson for his remark. Two days after winning the elections in 2014, János Lázár, the minister of the Prime Minister’s Office, wrote a letter to the Norwegian government. In the letter, Lázár wrote that the Norwegian funds are allocated by organizations favoring opposition parties. The accusations were rejected by Norway, but the government has done everything it can to bring the NCTA funds under its control.

Since its landslide victory in 2010, Fidesz has started to eliminate different types of autonomies and to exclude those whose opinions differ from theirs from public life.

In May the Government Control Office / Kormányzati Ellenőrzési Hivatal (KEHI) which controls the Hungarian budget, the tax office, the police and the prosecution, started a coordinated action against the consortium running the tenders and against the 58 supported organizations. The procedures included house searches, computer confiscations and were accompanied by an intensive communication campaign. Zoltán Balog, the minister of Human Resources, publicly stated, that he does not support any project which criticizes the current government (although later under public pressure he partially revoked his statement). Prime Minister Viktor Orbán in his famous “illiberal state” speech, and later in a speech to Parliament, labeled independent civil organizations as “paid political activists serving foreign interests”. Serious accusations and threats have been voiced against the civil organizations such as unauthorized financial activities, misappropriation, financial fraud, forgery, suspension of tax numbers, and meanwhile a number of international organizations, the UN, the European Union and representatives of the United States have protested on high levels against the procedures of the government.

While the governing party’s statements talked about political activism, the list of targeted programmes can be seen to be completely different. Among the targeted programmes supported by NCTA there are projects such as helping people with autism and Downs syndrome, the protection of drinking water, teaching traditional crafts, and the self-interest advocacy of people with tumors. Moreover NCTA’s operations were found to be in order by independent organizations such as Ernst & Young of the Big Four, and by the a Brussels-based Financial Mechanism Office, which was officially responsible for the transaction. Additionally, formal procedures have been terminated without result. Following the tax audits there were no official investigations launched, the police investigation did not receive any complaints, the court ruled the house searches illegal and the organizations had their tax numbers returned.

Despite this, the damage suffered has been quite substantial. During the investigations, the organizations had to re-allocate their human and financial resources in order to cooperate with the authorities and therefore they had no staff free to dedicate to their primary tasks. The government propaganda also has had a serious consequence: by stigmatizing the “Norwegian” civil organizations, they have led to the organizations have more and more difficulty in finding partners for their work. Many possible supporters and municipalities do not want to take on projects linked to them as they are afraid of the political backlash. Hate speech trickles down to the level of ordinary people who know very little about the work of civil organizations: during the counter-campaign a star of David was drawn on the mail box of Krétakör by an unknown person.

Another example of Fidesz’s fight against civil organizations is their campaign to try to solve drug problems through law enforcement, which has resulted in making the work of Kék Pont Foundation’s needle exchange programme impossible. Kék Pont has been working on its harm reduction programme since 1996 in the areas of Budapest most affected by drug abuse. Such an area is the 8th district where the mayor is Máté Kocsis, who is also the director of communication for Fidesz. The municipality started a smear campaign against “the drug-abuser-serving” Kék Pont, decreased its funding, then dissolved their cooperation which had been working for many years without a single problem. Finally the Fidesz-led municipality raised the rental of the Kék Pont office, so they could not continue with the needle exchange programme. The termination of the programme serving nearly three thousand drug abusers could lead to serious public health threats, especially in the area it operates in and has also lead to fears that HIV-positive substance abusers might increase.

The CSOs perform public service tasks that the state or the municipalities cannot address, because they cannot be expected to have provisions for everything. In a democracy, the civil sector functions like the society’s immune system and its level of development shows the quality of the democracy. The USAID’s sustainability index also shows the deterioration of the situation in Hungary since 2010. While five years ago the evaluation of the sector was satisfactory, by 2014 the indicators showing the conditions of the sector have dropped to a new time low.

The Hungarian government is showing more and more features of a closed and authoritarian society: it regards all autonomous organizations as dangerous, which is arguably why it tries to bring them under its own influence, or if that fails, it tries to make their operations impossible. Accordingly, organizations dealing with issues which are being failed to be addressed by the government (e.g. growing poverty, homelessness, mistreatment of the Roma, health care etc.),  those organizing programmes that place value on debating with the central power, and who promote active citizenship and an open society, are regarded as enemies by the Hungarian government. The investigations against Krétakör Foundation correspond to this pattern and there is a substantial fear that the working conditions of CSOs will deteriorate further in the following years. This will not only have irreparable consequences for health care or in the social sphere. Without CSOs, the low social participation will further decrease in Hungary, and people’s disengagement from politics will result in the current government’s stay in power for many more years.