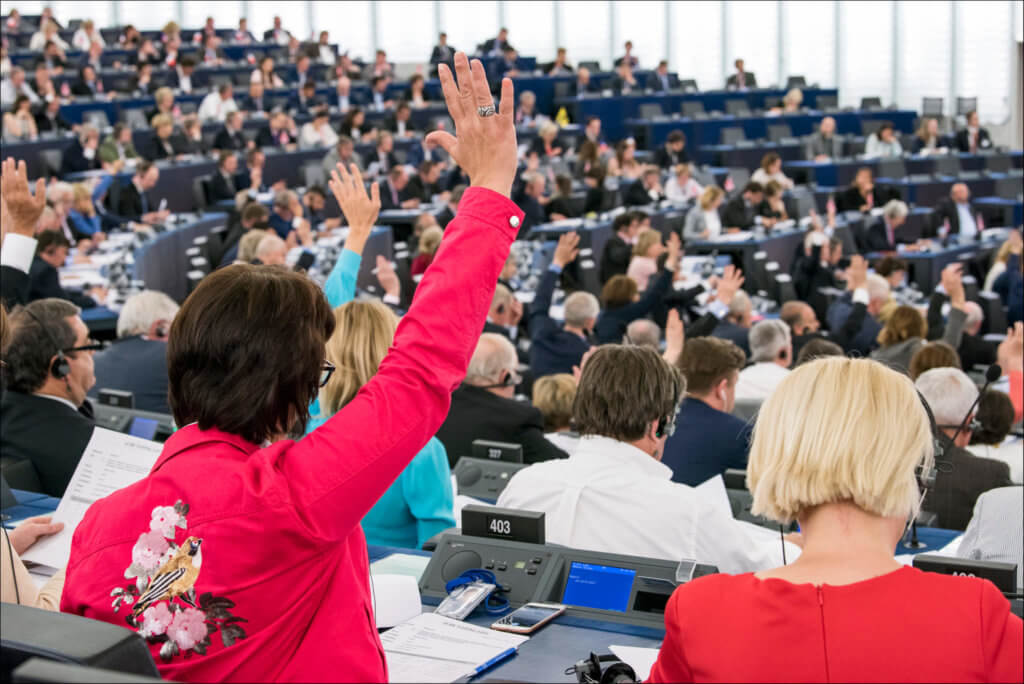 Voting time at the plenary chamber. Photo courtesy of European Parliament on flickr.com.

Hungarian media has been preoccupied with the European Parliament’s decision to trigger the procedure that would launch Article 7 of the EU Treaty against Hungary since the vote passed on Wednesday. But in reality, this is merely a symbolic step, as there’s very little chance of the Article actually coming into effect. What’s far more important is the message the vote conveys to the governing party, Fidesz: you need to revoke the law undermining Central European University’s operation, the law aiming to list NGOs as foreign agents, and the law trapping refugees in transit zones at the border if you want to continue being a member of the European Union.

The Parliament’s decision is interesting because Article 7 has never been triggered against any member state before. This is the EU’s nuclear bomb, which could suspend certain rights of a member state, including voting rights. It could also mean a suspension of all EU funding received by the country. But there is a long road before the Article can come into effect, and at the end of that road, the member states make the final decision. We can be reasonably sure that the Polish government would veto the decision, similarly to Orbán’s promise to also veto in case the article is ever triggered against Poland.

This is precisely why the European Parliament’s other demands are more important. A month ago, the European Committee announced before the discussion in Parliament that they would be implementing an infringement procedure against Hungary in the case of CEU. The Committee, and a few days later the People’s Party (the party Fidesz belongs to in the European Parliament), announced that they would give Hungary one month to change its course regarding laws directed at CEU and NGOs, as well as changing the government’s current campaign against the EU.

Many people in Europe feel that the time has come to strike against the Hungarian and Polish governments, since they don’t abide by the EU’s values.

Throughout this month, the Hungarian government has so far done nothing to comply with the demands of the Parliament, the People’s Party, and of the Committee. They are basically letting the situation run its course. Behind the scenes the government has tried to influence the People’s Party through their contacts in the smaller German governing party, the Bavarian CSU, but this was unsuccessful (although the entire CDU/CSU faction voted against triggering the Article), and in the end the Parliament adapted the Left’s – liberals, social democrats, and greens – proposal, alongside the votes of several representatives of the People’s Party.

After the victory of the pro-EU and anti-Putin Macron in France, the Hungarian government has found itself in an even worse situation. Many people in Europe feel that the time has come to strike against the Hungarian and Polish governments, since they don’t abide by the EU’s values. And during Macron’s and Merkel’s meeting last weekend, the possibility of a two-speed European Union was seriously discussed, which would mean that “freeloaders” like Hungary, a country that clearly positions itself in opposition to the EU, would become unnecessary, and therefore there would be no need to try to reach a compromise. This situation presented itself as the right moment to sanction Hungary.

The Hungarian government’s propaganda machine has already started to shout about foreign interests, George Soros, and Brussels, trying to make it seem like decisions made in the EU are somehow illegitimate in Hungary. But the European Parliament, elected by the people of Europe – including Hungary – during the European parliamentary elections is a legitimate institution. This then means that representatives of Fidesz are its elected members as well, meaning they also accept the institution’s legitimacy.

The existence of a university should be more important than the government’s political interests.

The warning Fidesz received was given through the indirect will of the people of Europe – a people including Hungarians, not just some foreign power.

Additionally, the protests that have been taking place across Hungary for months now also indicate that the will of a large portion of Hungarian society coincides with the will of the people of the European Union. Normally, a government could do nothing but retreat.

The question is what the government, Fidesz, and Viktor Orbán will do in this irrational country. Because the attempt to execute CEU and attack NGOs were and are irrational decisions if we maintain normality as people with different opinions living in peace alongside eachother in the same country, and that the existence of a university should be more important than the government’s political interests.

Last weekend saw several more protests against the government in Hungary: in Budapest at least 10 thousand people took to the streets, and a few hundred people attended events in smaller cities as well. Although these may not have been the largest protests in recent weeks, nor the ones that had the biggest impact, but the fact is that it’s been a long time since a wave of protests has kept going this long in Hungary. We, the Hungarian people have demonstrated, and will keep on demonstrating what our will is!