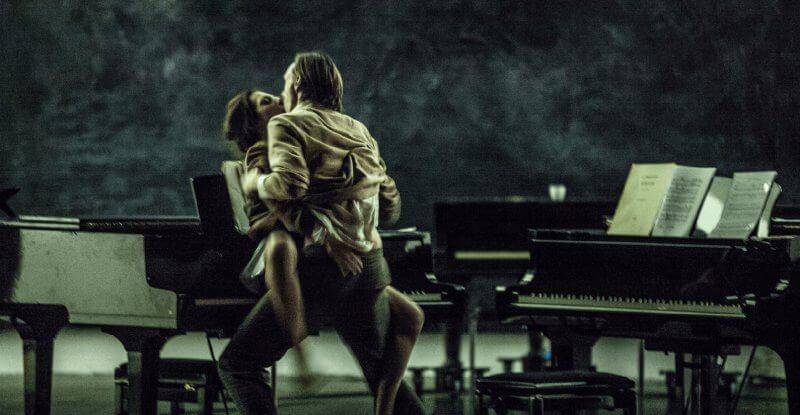 For the new right-wing conservative government of the Law and Justice party (PiS), Polish theatre has become a priority. The Czech media like to confirm the widespread stereotype of Poland as a strange Catholic museum of unmodern puritan opinions. They have therefore also picked up on the scandal surrounding the participation of Czech pornographic actors in a production of Elfriede Jelinek’s Death and the Maiden at the Polish Theatre in Wrocław. Despite the demands of the Ministry of Culture and National Heritage only four days after new minister Piotr Gliński assumed office for the governor of the Lower Silesian Voivodeship, under whose remit the theatre falls, to ban the play, the premiere went ahead as planned at the end of November 2015. It was, however, undoubtedly the most spectacular opening night that Polish theatre has witnessed since 1989. Interventions of politicians, numerous outraged commentaries in the media, and protests of Catholic and conservative initiatives (together with anonymous attacks on the producers and actors of the Polish theatre, including their family members), culminated in a demonstration in front of the theatre on the day of the play’s opening and the arrest of twenty of the loudest protesters.

The Ministry emphasized that this is not a case of censorship, but of a duty to intervene in a situation where a publicly funded cultural institution is violating propriety and promoting pornography.

Considering the critical responses to the play itself, such a hullabaloo was not even worth it. The show does indeed start with the performance of the Czech guests, nevertheless the scene, which lasts several minutes, is punctured by strobe lighting to such an extent, that the audience can only infer if what they are seeing is really what people were protesting against outside. But the Polish Ministry of Culture is of a different opinion. In its protest letter from 20 November of last year, it emphasized that this is not a case of censorship, but of a duty to intervene in a situation where a publicly funded cultural institution is violating propriety and promoting pornography.

The new government intends to uphold its duty. Already in his second week in office, Minister Gliński asked his deputy, Wanda Zwinogrodzka, to conduct a detailed analysis of Polish theatre, from not only a financial, but also artistic perspective. Zwinogrodzka is to focus on institutions which fall within the remit of the Ministry of Culture and National Heritage, that is the National Theatre in Warsaw, the Grand Theatre – National Opera in Warsaw, and the National Old Theatre in Krakow. At the same time, on 11 January, the Minister dismissed four out of five advisory experts for dance and theatre, who were named by the previous minister in October of last year. The advisors were dismissed over the phone and without any specific reasons given.

The Minister explained why it is necessary to focus on the artistic quality of of public theatres in an interview for the pro-government newspaper Nasz Dziennik on 4 January. According to Gliński, producers are hiding under the veil of experimental – and moreover elitist – theatre, which, using taxpayers‘ money, only discredits national culture. “There is no reasons for groups who are moving towards the destruction of culture, tradition, and Polish identity, to be given priority as they had been up till now”, Gliński concluded his justification of the artistic vetting of public theatres.

The perverse influence of artists

The above-mentioned groups are represented by Mariusz Treliński and Jan Klata. The artistic director of the Grand Theatre – National Opera in Warsaw has been facing criticism for some time now that his activities at Poland’s premiere opera stage are not “national” enough. His colleague Jan Klata, artistic director of the National Old Theatre in Krakow, has been dealing with similar issues. His productions have long been received with distaste by conservative audiences, some of them were disrupted by protests on their opening nights. At the beginning of December, an open letter to the Minister of Culture appeared in the daily Gazeta Polska Codziennie, in which ninety signatories demanded the director’s dismissal. Klata, whom the letter compared to Italian communist Antonio Gramsci, was accused of destroying Polish tradition and deliberate political provocation, which he allegedly achieves through a “postmodern crushing of the dramatic text”.

Since the beginning of the new millennium, Polish theatre has become a highly critical art form.

Similar objections can be found in the texts of theatre critics. Temida Stankiewicz-Podhorecka from the afore-mentioned conservative daily Nasz Dziennik, published a text shortly after the inauguration of the new government, entitled “What I expect from the government”, in which she lists six examples of the biggest problems that Polish theatre is, in her opinion, suffering from. In the first place, this is allegedly an attack on national identity, apparently achieved by ridiculing the national dramatic canon, which Stankiewicz-Podhorecka would have protected by law. Another alleged problem are attacks on the Catholic church and religion, and the presentation of the contemporary Polish family as a pathological phenomenon, which is discouraging the younger generation from entering into marriage. The fourth and fifth problem are, according to the critic, a deliberate and even agitational promotion of homosexuality and pornography. The worst problem of contemporary Polish theatre remains, however, according to Stankiewicz-Podhorecka, the fact that all this is financed by the “Polish taxpayer. So-called artists and theatres must be prevented from financing activities that destroy the mind, have a perverse influence on morality, humiliate human conscience and – in keeping with the intentions of the ideology of the new left – devastate Polish tradition and sow hateful poison in our country”.

Less dogmatic, but all the more telling rhetoric was chosen by Piotr Zaremba in the weekly wSieci. In his article, Zaremba compares contemporary Polish directors with those from the 1960s and 70s. He admits that they too did experiment, but always stuck to the poet’s words. The problem arrived at the moment when director Konrad Swinarski (1929-1975) stepped off the stage and began to perform Polish classics in all parts of the theatre building. But thanks to the fact that Swinarski staged the Polish romantics, Zaremba in the end takes kindly to him.

The problematization of Konrad Swinarski‘s work, which can without hesitation be identified as the precursor of the contemporary Polish theatrical wave, lies at the centre of protests against the so-called artistic quality of Polish theatre. Indeed, the directors who entered the Polish scene at the end of the 1990s went even further than Swinarski. Not only did they completely refuse the dramatic canon (romantic and modernist texts), but self-confidently left the theatre building and stepped out into the real life of the contemporary street – sometimes literally. As their subject matter, much earlier than in the case of literature or film, they chose current but unarticulated problems, such as the legacy of the Holocaust or social ostracism based on psychosexual identity or economic and social status. Since the beginning of the new millennium, Polish theatre has become a highly critical art form. Of course we should not overestimate its influence on social events. Theatre will probably remain a minority art form and that is all the more true for critical theatre. But because it has taken this path, there is now a platform for the reflection of the Polish present day; not to mention that by opening up to different new aesthetics, it has become one of the most progressive theatre cultures in Europe. And it is precisely this that the proclaimed analysis of artistic quality is targeting.

This text originally appeared in A2 3/2016. Translated by Veronika Pehe.

Jan Jiřík
is a theatre critic and works at the Arts and Theatre Institute in Prague.
> see other articles <