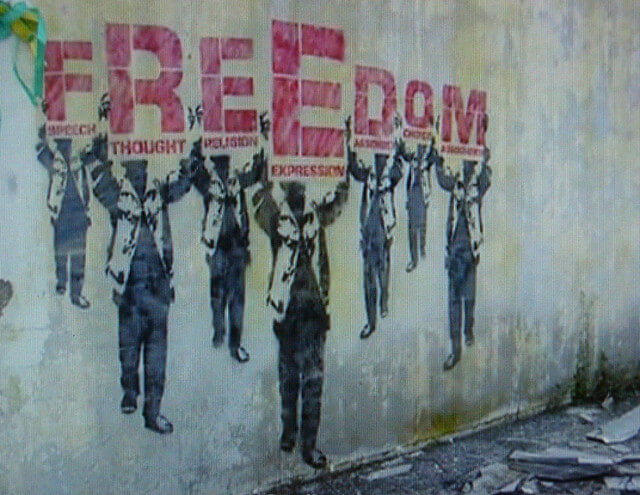 Ameer Alkhawlany is a doctoral student in biology who lives in Cracow, and comes from Iraq. He has been also a victim of a deadly combination of ineptness and racism of the Polish authorities. For the last month Ameer has been detained in custody for foreigners and faces deportation. The reason for his arrest is yet to be given, and we can only speculate that it has something to do with his refusal to collaborate with the Polish Internal Security Agency (ABW). Its agents approached him before the Pope’s visit to Poland in August and wanted him to infiltrate the Muslim community within Polish cities. Only massive pressure on the authorities can now make the innocent student get out of arrest and avoid being expelled from the country he chose to live and study in.

In June this year the Polish government introduced a very harsh Anti-Terrorist Law according to which people can be arrested without providing a reason or pressing any charges, and kept in detention for up to two weeks. It’s particularly dangerous to foreigners: The Law on Foreigners allows the authorities to prolong their detention and to deport them while keeping the reason for these measures secret, ‘if it is of importance to public order, defence or security’. Needless to say, the foreigners in danger originate mostly from the Middle East, Caucasus and Central Asia. As newcomers from Muslim majority countries to Poland are usually students or academics on exchange, the media report of many cases where they were approached and blackmailed by the secret service forcing them to collaborate.

All this is happening in a country where the lack of any serious danger to public security forces the authorities to desperately look for “acts of terror”, from which they must protect the population. Recently, the most serious “terrorist attacks” in this sense were: an inept explosion of a home-made bomb prepared by an alienated individual of Polish origin and right-wing political views, and a devastation of two empty police cars. Unfortunately, this is also happening in a country where xenophobic hysteria is reaching unprecedented levels, where racist attacks take place every day, and where the authorities from the Law and Justice party (PiS) are not ashamed to cooperate with far-right organisations on both local and national level. The anti-Muslim frenzy known from most European countries is in the Polish case particularly preposterous, as Poland has an tiny local Muslim minority and rejected to accept any refugees fleeing recently the Middle East.

What led Ameer to where he is now is a systematic and individual racism in Poland. Click to Tweet

The situation is deplorable in the area of public security. Antoni Macierewicz, an old friend of Jarosław Kaczyński and the current Minister of Defence and the head of the secret services, presents a very peculiar and potentially extremely dangerous mixture of persecution fixation, orthodox Catholic religiosity, obsession with both the Western and the Russian cultural and military threat – combined with suspicious links to Russian agents of influence – and an absolute lack of professionalism. The secret service under his leadership sometimes looks like a sinister apparatus of oppression, and sometimes like a bunch of radical right-wing teenagers who watched too many action movies and were then unexpectedly given the power to play with other people’s lives and futures.

What has been happening to Ameer is a perfect example of this. Internal Security Agency contacted Ameer multiple times trying to convince him to collaborate. Initially, they wanted him to infiltrate Cracow Muslim community and get the information about intended actions, addresses and even sources of income of its members. As he refused, saying that he was an atheist, and would not know how to behave in a mosque, the ABW agents charged him with a new task: he was supposed to travel across Poland in search of people of Middle Eastern origin, to obtain information.

From the very beginning the agents combined harsh and radical methods of recruitment with utter incompetence: some of the foreigners Ameer was supposed to spy on didn’t even speak any language known by Ameer, the agents didn’t believe that an Iraqi citizen could be an atheist and they kept confusing the information about Ameer given them by Ameer himself. At the same time the agents were threatening him by making it clear that it solely depends on them if he would be able to prolong his stay in Poland. Despite the agents’ threats, Ameer didn’t give in, constantly rejecting their offers.

For a while it looked like nothing changed: despite his refusal, in September Ameer received his permit to stay in Poland until the end of January 2017. But then events changed dramatically: on the 3rd of October Ameer was captured by the Border Guard and transported to court which immediately decided to arrest and deport him – a decision which also results in a ban on entry to the Schengen zone for five years. The court’s decision was not based on any evidence or grounds other than a recommendation from the Head of the Internal Security Agency.

If anyone had any doubts about why Ameer was detained, they were dispelled almost immediately. The day after the detention Ameer was visited in the custody by his two agents, who gave to understand that his arrest was a punishment for refusing to cooperate. According to the agents, a similar fate was awaiting both of Ameer’s brothers, one of them studying in Poland, the other one in Germany. Obviously, Ameer was ordered to keep quiet both about the visit and about other doings of the Internal Security Agency.

The day after the detention Ameer was visited in the custody by his two agents, who gave to understand that his arrest was a punishment for refusing to cooperate.

And at first Ameer indeed kept quiet in the vain hope that his situation could be easily solved with legal measures. He had one week to appeal the arrest warrant and two weeks to appeal the deportation order. The court didn’t inform him that he had a right to defense, but fortunately his brother quickly hired him an attorney. The lawyer managed to appeal the arrest warrant, even though Ameer himself received the document translated into Arabic four days after the deadline for appeal. Precise reasons for Ameer’s arrest were still confidential and not disclosed even to his attorney. He was only told vaguely that his client’s behavior was a threat to Polish security. However, the Internal Security Agency didn’t even pretend to believe in its own absurd indictment line: Ameer’s room was not searched, his brother, friends and lecturers were not interrogated.

Two weeks later, Ameer still in detention, a superior court was examining the appeal against the arrest warrant. The Internal Security Agency disclosed the confidential reasons of Ameer’s detention to the judge, still keeping them secret from others. Interestingly, the court’s decision to reject the appeal had nothing to do with those highly secret information, whatever it was, probably because of its triviality. As we can read in the substantiation of the verdict, “the court of the first instance was acting intuitively” and this intuition was reason enough for them to justify the arrest. Acknowledging how desperate his situation was, Ameer then decided to make public his contacts with the ABW, but this changed his position in no way.

This Kafkaesque situation means that the defendant and his attorney are kept in the dark and it is impossible for them to prepare any defense. In addition, as a non-Polish citizen, Ameer is charged with the costs of his ‘accommodation’ in the detention centre and a plane ticket back to Iraq, the overall amount of approx. 1,100 euro. Ameer still awaits a decision from the Office of Foreigners* in Warsaw. According to his attorney, the chief of the office will take a decision on the Iraqi student’s future in a fortnight from the time of writing.

We face here a situation where Polish special forces arrested an innocent person, exclusively because of his ethnicity, and locked him up in custody without a possibility to defend himself. They did it to efface a failure of an unsuccessful recruitment action which had been itself based on racial prejudice and blackmail. What led Ameer to where he is now has nothing to do with his actions, views or attitudes. The only reason is systematic and individual racism. The only reason is institutional hunt for scapegoats, so very much needed in times of any social unrest. Ameer’s broken life is supposed to be a side cost of the crawling suspension of democracy in Poland.

But we will not be fooled again. The social crisis we face is not caused by Ameer, as it is not caused by other foreigners arriving to Europe to find peace, to study, work and live here. This crisis has its deep roots. We indeed have enemies in it, but they are not Ameer; they are those who caused the crisis by their greed, and those marching through streets of our cities with banners preaching hate. It is crucial that we stand united against economic oppression as well as against nationalism and xenophobia fuelled by politicians and the media. It is crucial to show our solidarity with the oppressed. It is crucial to resist all attempts of imposing racist and authoritarian rules on our societies. We have to prevent European governments from repeating mistakes of the past.

This is why we need to speak with one common voice: free Ameer Alkhawlany!