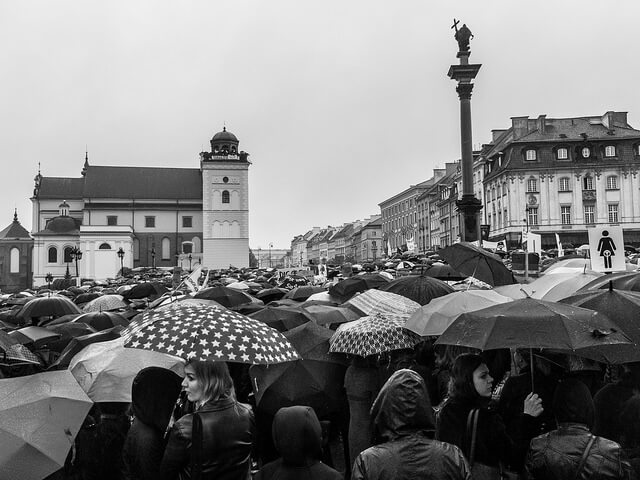 This past week Poland’s PiS government suffered its first blow since coming to power nearly a year ago. In what amounted to a complete U-turn following a dramatic parliamentary session in the wake of the Black Monday protest, PiS MPs struck down a proposed bill to ban abortion. Domestic and international media were quick to hail this as a victory for the anti-government protest movement. More so, PiS became divided over the issue as 32 MPs defied party discipline to vote against the bill.

It was an optimistic note in a region where illiberal populism and authoritarian governments are on the rise. During the same week in Hungary, a referendum challenging an EU plan to resettle refugees was held in which 98% of voters endorsed Orbán’s FIDESZ government’s anti-refugee and xenophobic stance.

Though the referendum turned out to be invalid due to insufficient turnout, the government presented it as a victory. Then, Hungary’s largest opposition newspaper, Népszabadság, was suddenly forcibly closed down after criticising oligarchs and corrupt practices linked to the Orbán government.

The protest in Poland managed to produce a first crack in the PiS bastion and was hailed so by the independent media.

In Poland, the striking down of the proposed abortion bill was a first blow to the government, but PiS will most likely try again to tamper with the abortion legislation if only to appease the ultra-Catholic part of its support base. Furthermore, PiS still aims to continue with its political project of ‘good change’ – it has for instance not backed down in the conflict surrounding the Constitutional Court.

Nevertheless, the situation is not as dire as it might seem. Though PiS clearly favours an authoritarian state based upon a majoritarian interpretation of democracy, the likelihood that Poland could ultimately succumb to ‘Orbánisation’ is rather slim.

Poland is not Hungary

Arguably, there are quite some admirers of Orbán in PiS and vice versa. The reciprocal veneration between the Polish Right and Orbán harks back to the late 1980s. While FIDESZ as a political party grew out of Hungary’s radical student opposition, Poland’s then anti-communist student activists were already too divided to manage a similar feat. Among the Polish Right this nurtured the esteem for Hungary’s authoritarian Prime Minister. This year, at the regional Economic Forum in Krynica he received the annual ‘Man of the Year‘ award, succeeding Jarosław Kaczyński in that role.

Such affinities have prompted many comparisons between the two countries in the past year. While there are admittedly some similarities the differences are crucial. Poland has not seen its Constitution changed and its civil liberties restricted as in Hungary. There is also no far right political force in Poland comparable to Hungary’s Jobbik, though Poland is seeing a rise of far right and xenophobic sentiments in particular among its youth.

More so, though PiS has taken over the state-run media, there are no oligarchsin Poland who could buy up independent media and silence it as in Hungary. Internationally, PiS is much weaker than FIDESZ which can count on support from the European People’s Party, while PiS lost its biggest ally in the EU arena, the British Conservative Party, after the Brexit vote. In addition, PiS’ arch-nemesis, Donald Tusk, is President of the European Council. And PiS’ more-than-average Polish Russophobia rules out any Orbán-style flirtation with Putin.

In Poland’s current situation, rhetoric matters more than actions. Of all PiS’ social-economic electoral promises it has only managed to implement a watered-down version of its child support programme. That alone has put enormous strain on the budget pushing the deficit to its largest since 1989.

As a result the Finance Minister, Paweł Szałamacha, had to step down. To compensate, PiS keeps ratcheting up its nationalist-patriotic rhetoric, but its failure to implement its ‘social-economic package’ will shrink its support – and the latest polls are starting to point in that direction.

So far, the ‘PiS revolution’ has mainly consisted of personnel and cadre changes – often to the detriment of the institutions and state companies involved as capable experts and administrators were dismissed in favour of political clients. Ultimately, PiS’ attempt to steer the country on an authoritarian course will be undercut by its policy failures which in turn will lead to resentment in the ranks.

Poland’s parliamentary politics since 1989 have been plagued by a volatile party system. Parties could flourish and then suddenly collapse; governments regularly lost their parliamentary majority. The past decade has seen some improvement in this regard, but the fluidity was still present especially when it came to political defections. This includes a few high-profile examples such as Radosław Sikorski, Leszek Miller, Janusz Palikot, and Jarosław Gowin. Infighting and clashes of personalities due to individual career ambitions rather than policy issues have been common and persistent throughout the years.

While PiS’ victory in last year’s elections produced a non-coalition government for the first time since 1989, PiS is much weaker than it looks despite its parliamentary majority. This majority rests on merely five seats in parliament (235 MPs out 460 in total) and is in fact made up of PiS in alliance with two smaller parties, Polska Razem and Solidarna Polska, which had rallied together with PiS for the elections. Both parties, each having nine MPs in the PiS bloc, are headed and represented by former political secessionists.

The absolute though slim majority of the PiS bloc is therefore vulnerable. If only six MPs from the majority break ranks, the government is no longer backed by a stable voting bloc. It would for example suffice for either Polska Razem or Solidarna Polska to defect, and PiS loses its majority.

Such a defection would not be unprecedented in Polish politics. It could easily materialise due to differences on policy issues such as abortion or personal conflicts with Kaczyński, the undisputed PiS chairman. More importantly, this kind of political strife could be fuelled or exacerbated by grassroots opposition to the government’s policies.

Poles can mount a grassroots challenge

The Black Protest movement demonstrated that PiS can be successfully challenged from the grassroots level. Even though Black Monday was not the biggest manifestation of protest since PiS came to power, it successfully divided the governing camp forcing it to retreat. Additionally, it mobilised and politicised segments of society that had thus far not been engaged in anti-government protest.

During the Black Protest one of the slogans read, “the government is not a pregnancy, it can be terminated.”

Meanwhile, the Committee for the Defence of Democracy (KOD), the civic movement that opposes the government, will be organising further protests. In addition, trade unions are starting to mobilise against the government’s failure to deliver on its economic promises. PiS is being opposed in the cultural sphere by artists and academics. The new left-wing party, Razem, is also holding its own protest demonstrations.

Finally, there is the potential of nationalist contestation if PiS fails to make good on the patriotic-nationalist discourse it espouses. An upcoming test of strength will occur on 11 November, Poland’s Independence Day. KOD has already called for demonstrations to rival the nationalist and far right Independent March.

At present, the grassroots challenge to the PiS government does not necessarily need to boil down to a united movement. Any issue that can mobilise resentment to the government will weaken its position in the sense that the governing camp could become more divided. And PiS’ populist rhetoric could turn against itself, in turn further weakening the unity in its majority bloc. In the meantime, the parliamentary opposition parties (and those like Razem which are not in parliament) can formulate a successful electoral alternative that resonates with the grassroots demands.

This government can be terminated

“The winter is yours but the spring will be ours,” was a Solidarność-era resistance slogan. One that can be heeded by the current opposition. In September, Kaczyński issued a warning to PiS’ MPs. He cautioned against any ‘triumphalism’ and informed them that during the next months the country would see ‘dramatic’ parliamentary sessions and that they should prepare themselves psychologically. Barely a fortnight later, after a day of massive protest against the proposed abortion ban, a first dramatic parliamentary session indeed took place. But it ended with PiS making a complete volte-face and sounding a chaotic retreat.

During the Black Protest one of the slogans read, “the government is not a pregnancy, it can be terminated.” The protest in Poland managed to produce a first crack in the PiS bastion and was hailed so by the independent media. It was a very different week than in Hungary, which started with an anti-EU referendum and ended with a crackdown on media freedom and a strengthening of Orbán’s illiberal regime.

In Poland, the probability of growing divisions in the governing camp combined with and fuelled by new and diversified grassroots opposition to the government can usher in further political instability. The government might lose its parliamentary majority. PiS will then face a real challenge, one that could spell its government’s downfall.

This text originally appeared in openDemocracy.