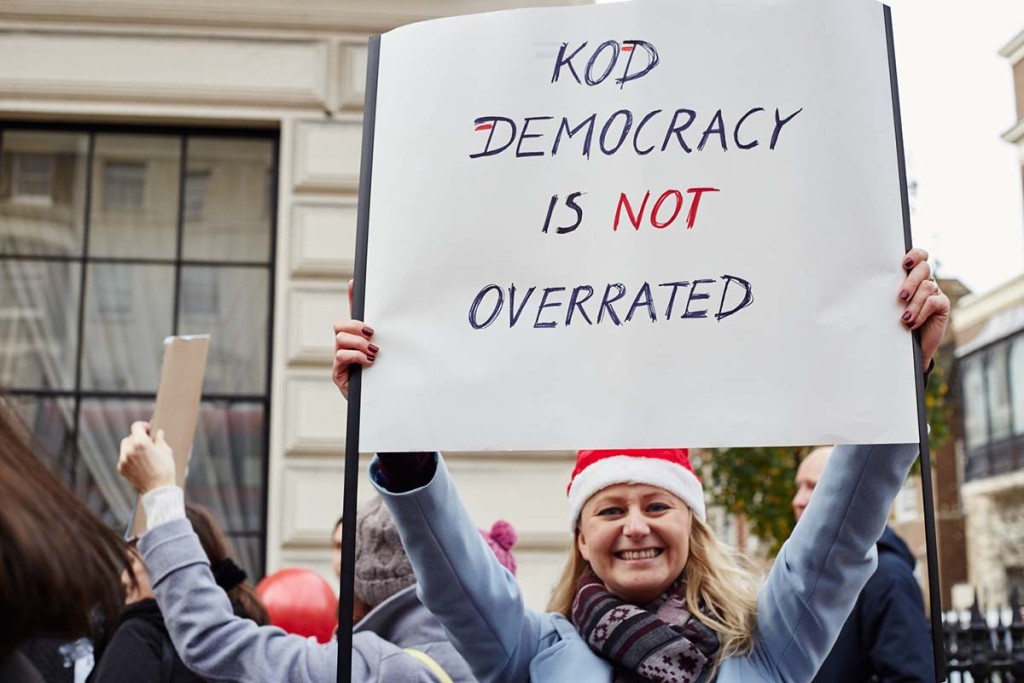 On October 25, rule in Poland was taken over by Jarosław Kaczyński’s Law and Justice party (Prawo i Sprawiedliwość, PiS). The largest formation of the national right, which only in May had succeeded in seeing Andrzej Duda elected president, garnered a majority in parliament (in both the Sejm and the Senat, the lower and upper houses of the Polish parliament, respectively), and immediately rushed into the offensive. PiS’s plan is simple: to turn Poland into a national autocracy, where the basic social securities for citizens (such as the monthly 500-złoty benefit for those raising a child, an increase to the income tax threshold, etc.), financed through a correction of the free market (including, among others, the levying of a tax on bank transactions and on supermarket chains) will be distributed in exchange for limitations on personal freedom (such as internet surveillance), legislation modelled on national-Catholic morality (pro-life laws, a ban on in vitro fertilization and the definition of marriage as a union between man and woman), and a culture celebrating role models of heroic patriotism, glorious episodes of national history, and adherence to religion.

The victory of the national right came as no surprise, though its scale and far reaching consequences certainly did.

Lacking a constitutional majority, PiS is forced to achieve its political goals in two ways: by means of gaining control over institutions (including the public media, cultural institutions, state-owned companies and the civil service), and by a forceful broadening of the legal corridor which for the past quarter of a century (i.e. since the collapse of communism) has served the purpose of curbing autocratic attempts. The latter consists, among others, in gaining control over such bodies as the Constitutional Tribunal, which has the power of calling into question laws it finds inconsistent with Poland’s Constitution, but also in undermining the tripartite separation of power (which does not allow for the functions of Minister of Justice and Prosecutor General to be held jointly by one and the same individual) and bypassing the division of administrative powers (central, territorial and local administration, each with separate competences). PiS is churning out laws that dismantle the liberal system’s democratic checks, in order to clear the way for instant realizations of its government’s political will by having them voted through and signed by the president, dodging whatever controls might undermine, question or stop them.

In less than three months since it assumed power, PiS has changed the form of the Constitutional Tribunal, transformed public media into national cultural institutions reporting directly to the Minister, and rehashed the law on civil service so as to be able to adjust its personal composition to the needs of the authorities. At the same time there has been an  audit going on in public cultural institutions with regard to their alignment with the national mission. This has been accompanied by changes in the boards, councils, and leading positions of state-owned companies. The Sejm debates law after law, drafted in the past eight years, during which PiS patiently struggled for power. These are about to change Poland into a country whose citizens may be materially slightly better off (and even that I doubt), but are also supervised, infiltrated, controlled, and censored.

The victory of the national right came as no surprise, though its scale and far reaching consequences certainly did. The model of political transformation adopted after the fall of communism in 1989, a consensus between the Communist Party, the mainstream of democratic opposition, centred around Solidarity, and the Catholic Church, and rooted in the geopolitics of the times (in particular the Polish oppositional elites’ relations with the USA) was based on “shock therapy”: radical market reforms matched with a decentralized model of liberal democracy and glued together with the dominant cultural role of the Church, back then in its relatively soft and tolerant form.

It was at a high pace that the former social state was dismantled, and the privatization of healthcare, education, and public transport and the crippling of workers’ rights came in concurrently with a liberalization of the job market and a dissolution of the universal system of social security. The state waived its obligations to run the social, cultural, and economic systems, delegating them to the market, NGOs and charities (often run by the Church). It was encouraged to do so by the very structure of the political system, resulting from the fear of authoritarian rule: power was divided between a government, a bicameral parliament, a president, heads of provinces (voivodeships), the provinces’ own parliaments, mayors, municipal governments and councils, mayors of poviats (roughly the equivalents of UK/US counties) and boroughs, and the heads of gminas (the smallest units of administrative division) in rural areas. Apart from that, checks were added in the form of special bodies (such as that of the Ombudsman and the Supreme Audit Office) plus a master valve: the Constitutional Tribunal.

Neo-liberal reforms brought about an exacerbation of social inequalities, poverty, poor working conditions and a wavering sense of stability and dignity in life, while the decentralization of the state was complicit in institutionalizing the liberal conception of non-interference into public policies on the part of state institutions, resulting in the state’s impotence to  uphold the law and guarantee social order. Poland’s accession to the European Union in 2004 made it possible to finally shift political agency to transnational structures, leaving the Polish government to the role of mediator between different interest groups, and of a moderator of social dynamics, occasionally intervening when things slipped out of hand. This is how the ideology of “hot tap water” emerged, deployed with success by Donald Tusk – the incumbent President of the European Council – and his centrist Civic Platform for the eight years of their office (2007-2015) .

The soil of deepening social inequalities, alongside the state’s withdrawal from its social responsibilities, created nourishing ground for Polish nationalism.

The soil of deepening social inequalities, alongside the state’s withdrawal from its social responsibilities, created nourishing ground for Polish nationalism: a lost sense of dignity and empowerment, a reaction to poverty, to a cultural transformation which a good portion of society found difficult to follow, and an identity crisis, which could not be helped even by the Church, despite its unquestioned standing. The right had for years managed and organized those emotions. For a long time we have watched it gain support and grow stronger thanks to them. PiS’s victory comes as a conservative backlash to a neo-liberal transformation.

Goddamn You Left, Where Are You?

The ruthlessness of that triumph has to do with yet another historical phenomenon: the absence in Poland – just as in other countries of the former Eastern Bloc – of a strong Left. All throughout this period of transformation, the Polish political stage was dominated by a post-communist formation, which exited only as a result of the 2015 election, founded upon the former apparatus of the Polish United Workers’ Party (Polska Zjednoczona Partia Robotnicza).

The delegitimization of leftist ideas due to communism’s authoritarian pathologies made it hard for the Left as a social movement to rebuild itself after 1989. The 1990s saw the development of feminist, ecological, and anarchist movements, but it was only the following decade that the Left could stand on its own feet. The emergence of LGBT organizations, new labour unions, the Polish Green party, circles such as Krytyka Polityczna, which created a brand new leftist discourse, social practices, and a universe of values. And finally urban activism movements and non-communist leftist political parties such as Razem, which in the last election enjoyed some public attention, made it possible for the Left to start becoming more visible, more recognizable and an ever stronger actor on the political stage. But the evolution of the Left as a cultural, social and, last but not least, political agent will take years – unless it gets suppressed by national authoritarianism. What is obvious is that a combination of the long-time occupation of leftist field by post-communists and historical influences rendered the Left unable to stop the triumphant march of the national formation.

PiS’s assault on democratic institutions sparked up an instant grassroots response, the most spectacular manifestation of which has been the social movement centred around the Committee for the Defence of Democracy (Komitet Obrony Demokracji, KOD). The committee was established in November 2015, as an initiative of activists committed to civic affairs. Since December 3, KOD has organized pickets to protest the consecutive decisions taken by parliament. One of the most crucial was PiS’s attempt to take control of the Constitution Tribunal. On the 12th of December, at a demonstration in defence of the Tribunal in Warsaw, about 50 thousand participants were present, according to the organisers. A week later, there were thousand-strong demonstrations in 23 cities throughout Poland. On the 9th of January 2016, people took to the streets in 20 locations in defence of the public media.

Demonstrations organized by the Committee bring together activists, leaders of the parliamentary opposition, progressive NGOs, mainstream and independent journalists, and thousands of citizens. Together, they form a unifying force of the “greater opposition” to the authorities. The demonstrations are also endorsed by the historical leaders of Solidarity, including Lech Wałęsa. At the same time, opposition to PiS is manifested by other circles, for example the Razem party, while centres of public opinion (including private and independent media) have taken a  harsher position, clearly disapproving of the misappropriation of Poland by PiS. The opposition grows stauncher every day, as does the sense of solidarity and empowerment in challenging the camp of the national right.

What do we do now?

Poland finds itself in a historic moment. The act of misappropriation of the state by the national right, to which we are responding, is unprecedented since the communist era. But equally unseen is the social reaction, manifesting resistance to the government’s  and the ruling party’s doings. Certainly, one has to do everything to fuel civil commitment and contribute to the mass character of mobilization against the authorities every time an act of dismantling democracy occurs. At the same time, we need to take another step. Poland after the downfall of PiS – if we succeed in overthrowing it and defending what is left of the constitutional order – must no longer be the country it was for the last 25 years. The other step thus consists of hard work for the purpose of developing a vision of Poland that would curb the neoliberal drive in favour of social justice, bridging inequalities, harmonious sustainable development and defending the freedom of the individual and the diversity of collective identities alike. Without fail, meeting those goals is also crucial for international solidarity, as is the cooperation of movements and social organizations for democracy in Poland and the entire Central European region.  We are in for a lot of hard, onerous, and rewarding work.