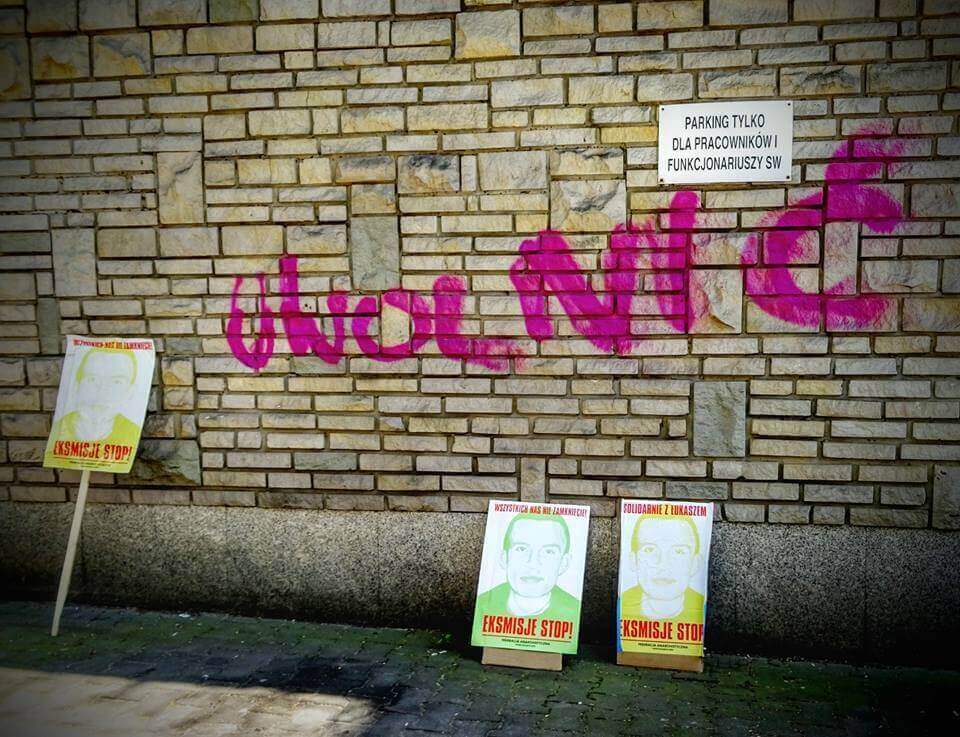 On 7 May, a picket in solidarity with poet Łukasz Bukowski was held in Poznań. Bukowski was imprisoned because he tried to stop the eviction of Katarzyna Jencz, an older lady in a wheelchair, from her flat. The activist was accused of assulting a public officer and sentenced to community service. After he refused to carry out this service, claiming he was actually the victim of a brutal police attack, he was sentenced to three months in prison.

Left-wing activists demonstrated in solidarity with Bukowski in front of the prison building in Poznań. Among them were the non-profit organization Kancelaria Sprawiedliwości Społecznej (Office for Social Justice), and the left-wing party Ruch Sprawiedliwości Społecznej (Movement for Social Justice), activists from the whole of Poland, poets, artists, and anarchists. The demostration was peaceful and accompanied by performances: samba was playing, people were dancing and shouting the slogan “Solidarność naszą bronią” (Solidarity is our weapon), poems were read.

But at the end of this legal demonstration, the protesters were attacked by the police. One of the activists attempted to write “Uwolnić Łukasza Bukowskiego” (“Free Łukasz Bukowski”) on the prison wall, but after completing the first word, a tussle broke out. Piotr Ikonowicz, left-wing politician and member of the Ruch Sprawiedliwości Społecznej party, together with his wife Agata Nosal-Ikonowicz, tried to intervene and stop this scuffle. Immediately two police cars appeared, and a couple of protesters, among them Ikonowicz and his wife, were kept by the police.

After that, part of the protesters went on to demonstrate in front of the police station and again a scuffle broke out, during which on older woman was hit with policeman’s shield. When this spontaneous demonstration finished, the protesters wanted to return to the buses that had brought them to Poznań, but these had been occupied by anti-terrorist police. In the end, the activists were finally allowed to return to their homes, but some of them came back with police charges. Piotr Ikonowicz and one other man were accused of assaulting a police officer. The man who wrote the slogan on the prison wall is under threat of a five-year sentence.

As Małgorzata Borkowska wrote in her report published on Dziennik Opinii, the police in Poznań are well known for their brutal (mis)use of force, so the incident only presented a continuity of their modus operandi.