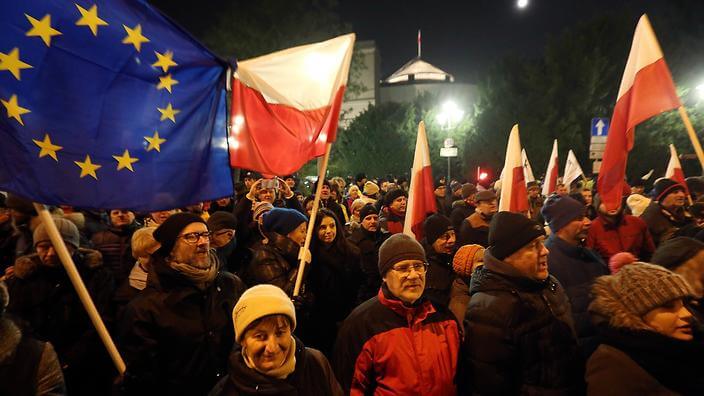 Last night, protesters blocked the exits from the Polish parliament after lawmakers passed next year’s budget without the customary open vote procedures established in the country’s constitution. Speaker Marek Kuchcinski moved the vote on the nation’s 2017 budget outside of the main chamber of parliament and blocked the media from recording the vote -something that had not happened since 1989.

Local news organisations report that direct access for media to the chamber was denied, with reporters only able to observe an official camera feed.

“There is no proof that a quorum of lawmakers was present. We suspect that people who were not allowed to vote took part,” leader of the opposition Nowoczesna party Ryszard Petru said.

Warsaw police spokesperson, Mariusz Mrozek, declared the protesters’ gathering before parliament illegal starting from midnight. Several opposition MPs spent the night in parliament until this morning when police broke up the blockade.

The PiS playbook is very clear: turn off the lights, upend constitutional rights and install an authoritarian regime.

PiS’s attempt to curb freedom of press in Poland did not come as a surprise, however, as their plan to take aim at independent news organisations and curtail access of the media to parliament was announced last week.

The worrisome extremist derive taking place in Poland echoes that of other neighbouring countries.

DiEM25’s co-founder, Srećko Horvat, stressed: “What is now happening in Poland already happened in Croatia when the right-wing government slashed financing of all independent media. Their move left mainstream news organisations either in the hands of the state or under the thumb of big capital. It is also happening in Hungary.”

“On the one hand, we have post-communist countries, which are trying to put forward the worst undemocratic measures, resembling to media blockade which preceded the 1930s. But on the other hand, we have protest movements, and one of the strongest currently flourishing where it was least expected – in Poland. What anyone who cares about media freedom and freedom of speech has to understand is that this is part of the general disintegration Europe is undergoing. This is why we have to connect more then ever, beyond nation-states, into a European movement that may bring back transparency and prevent Europe from sliding into a continent of censorship.”

According to Wiśniewska, PiS’s radicalization to the populist right has been happening for some time and is now accelerating. PiS has moved from being a moderate conservative member of the European’s People’s Party supported by nationalists and Catholics to becoming an anti-European political force pushing for an increasingly extremist agenda.

“DiEM25 is needed in Poland now more than ever. What’s happening here further underlines our warning: when transparency goes the powerful then move to kidnap the political process and strip citizens of their right to freedom of the press. This is when democracy dies. As DiEM25 denounced in its transparency campaign, democracy is a delicate flower that needs light to survive. Our first priority today is to #LetLightIn and avoid, at all costs, that extremists shut our parliament into darkness.”

This article was originally published on diem25.org.

DiEM 25
DiEM25 is a pan-European, cross-border movement of democrats.
> see other articles <