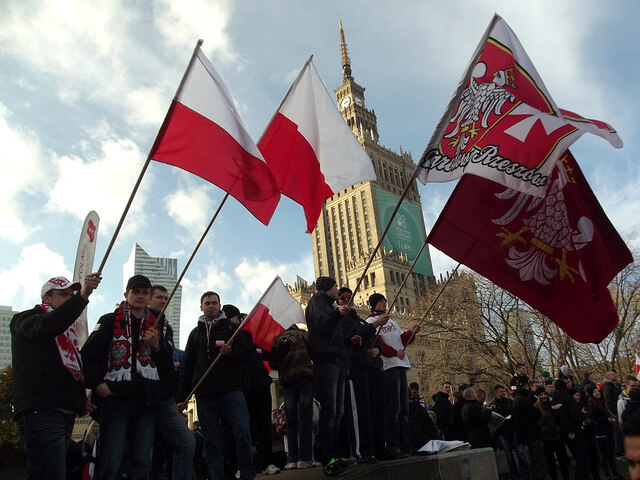 Poland is in the news again, but not necessarily for any good reasons. A country that not so long ago was labeled the success story of the post-communist transition is now making headlines as the latest example of an illiberal turn in Europe, one in which the ‘state of democracy’ is under real threat. There are several causes for this development, but one has received scant attention so far: the role of youth.

This is remarkable since young voters were a crucial group bringing about Poland’s ‘swing to the right’ in last year’s elections. As a result, there is no left or even centre-left political party represented in parliament.

Youth are also strikingly absent from the mass grassroots protest movement that has emerged in opposition to the current government of the conservative and populist Law and Justice party though this does not necessarily translate into support for the government.

Young people seem to have been massively swayed by an anti-establishment, xenophobic, and Eurosceptic discourse fueled by underlying economic resentments. At the same time, a rise in nationalist sentiments can be observed among the younger generation. To large extent, this is the result of the state’s ‘politics of history’ of the past decade.

Politics of history as a state prerogative

In Poland, history matters. It could hardly be otherwise in a nation that has been so touched by the core events and processes of the past two centuries in Europe. More so, the state has played an active role in promoting a historical narrative and institutionalising commemorations.

Young people seem to have been massively swayed by an anti-establishment, xenophobic, and Eurosceptic discourse fueled by underlying economic resentments and a rise in nationalist sentiments can be observed.

History is abound in public space and holidays, while a score of museums devoted to the country’s history (or parts of it) attract the interest of visitors all year round. The Warsaw Uprising Museum -in which especially young people can a get a feel of what it was to be a participant in the resistance through its interactive exposition- is one of the most popular museums in the country.

However, it is through a specific state institution, the Institute of National Remembrance (IPN), that the government’s politics of history are realised most effectively. The IPN is the largest historical research institute in the country, has a wide network of publishing houses, incorporates archives, it has a prosecutor’s branch to investigate historical crimes against the nation, has around two thousand employees, and its budget eclipses that of all the other historical research institutes combined.

Tasked initially with lustration and de-communisation, it has become a crucial instrument in the state and government’s ‘politics of memory’. In this sense it has a nationwide educational mission, popularising its historical narrative.

Beyond that, the IPN has also gained traction in academic and public debates on sensitive issues relating to the history of Polish-German, Polish-Jewish, Polish-Russian, and Polish-Ukrainian relations. In short, as an institution, the IPN is unrivalled not only in Poland, but in the region.

Since the IPN is a state-controlled institution an incumbent political party can dictate the politics of history and memory according to its own ideological preferences. This has proved problematic in the past when Law and Justice governed the country in 2005-2007 and the IPN became politicised and used as an instrument to deal with political opponents based on their past in the communist era.

Since Law and Justice managed to win an absolutely majority in parliament last year things have again taken a turn for the worse. The current government is engineering a complete takeover of the IPN by changing its legal ramifications and installing handpicked activists and historians in the institute’s organisational and executive structures.

More so, the government has embarked upon a radical overhaul of the country’s politics of history. This not only relates to changing existing or planned projects such as the Museum of the Second World War in Gdańsk, but in fact aims to educate the country’s youth in a ‘correct and patriotic’ fashion which includes emphasising the vicitimisation of the Polish nation and the glorification of new ‘heroes’ – such as the so-called ‘damned soldiers’ who fought the communist regime in a guerilla war immediately after the Second World War but whose actions also include anti-Semitic excesses and murderous crimes against other ethnic groups.

While the government wishes to increase history education to cultivate patriotic self-awareness among the youth, the current Minister of Education, Anna Zalewska, who is responsible for these reforms has recently publicly questioned Polish complicity in the wartime massacre of Jews and postwar anti-Semitic excesses.

Consumption of history and youth mobilisation

While it might seem that Poland’s youth is disenchanted -by voting against the establishment and not participating in the anti-government protests- it is hardly so that the younger generation has become apolitical. Voter turnout among the young tends to be traditionally somewhat lower than in other age groups during elections, but their current preference for right-wing and far right parties stands out.

More so, surveys among high school pupils not yet entitled to vote confirm this tendency. Neither is it so that youth cannot mobilise. In 2012, Poland was at the forefront of the anti-ACTA protests which were spearheaded by youth. Over the past years thousands if not tens of thousands of young people have flocked to participate in the so-called Independence Marches which have been organised by right-wing and far right groups on 11 November, Poland’s Independence Day.

The combination of the government’s politics of history and the consumption of patriotism among the country’s youth has potential detrimental risks as it also holds an emotional appeal.

Rather, it is a phenomenon of ‘consuming patriotism‘ that has substituted historical consciousness among the younger generation, which has been fueled by the rise of populist rhetoric in the political sphere. It is not books or academic debates on the country’s history -history as a subject is in decline as testified by a continuing decrease of matriculations in the subject- that serve to imbue the youth’s views.

Instead, we are witnessing a process in which patriotic-historical symbolism has meshed with youth pop culture, a development rooted in the 2005-2007 period of Law and Justice’s governments. It is thus not surprising that many young people donning T-shirts with WWII resistance symbols or the national ‘eagle’ voted massively for Paweł Kukiz, a rock star who espoused anti-establishment populism tainted with nationalist-patriotic overtones.

More so, the governing Law and Justice party has tolerated or even supported attacks on academics and historians who disagree or are critical of the current politics of history. It has not condemned nationalist and far right youth demonstrations which have increased in frequency since Law and Justice came to power. Simultaneously, a worrying proliferation of racist hate crimes has taken place around the country.

Nevertheless, the country’s president Andrzej Duda -praising the growing participation of youth in patriotic events- endorsed the latest Independence March which saw numerous accounts of xenophobic hate speech. The shallow patriotic expressionism espoused in these marches, in fact, mirrors football fans’ sloganesque behaviour, the visual effect of which has become so impressive that footage from the Independence March features in an upcomingHollywood film on neo-Nazis.

This combination of the government’s politics of history and the consumption of patriotism among the country’s youth has potential detrimental risks as it also holds an emotional appeal. While some scholars debate whether Polish youth is more right-wing than the rest of society, the patriotic and vocal cohorts of youth who hold a basic set of nationalist and chauvinist views will be swelling the electorate in the years to come. This represents fruitful ground for far right and populist politicians to expand their base.

In this sense, the instrumentalisation of the politics of history poses an implicit threat. It is like opening a metaphorical Pandora’s box as the easy-to-consume victimisation and glorification historical narrative can be influential beyond far right and nationalist milieux.

The potential consequences could be dire. For a growing number of vocal young people professing nationalistic and xenophobic views could pull the politics in Poland and the broader region even further down the illiberal path. It has been said that history repeats itself, first as tragedy and then as farce, but it is nonetheless a powerful and potentially dangerous (if abused) instrument in forging the future.

This text was originally published on openDemocracy.net