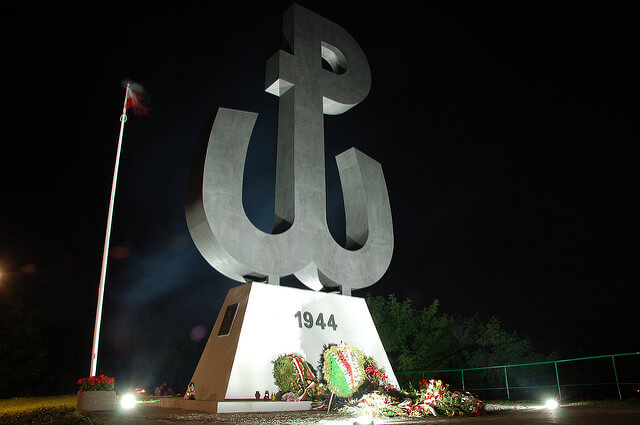 At 5pm on 1 August, sirens and church bells rang out in the Polish capital to commemorate the moment the first shots were fired in the Warsaw Uprising 72 years ago. The Warsaw Uprising was an ill-fated attempt by the Polish Home Army (AK)-the largest resistance force in occupied Europe-who launched a campaign to regain control of the capital from the Nazi occupiers. The insurgents held out for 63 days before the uprising was ultimately crushed by the Nazis, who proceeded to raze the city to the ground. The exact number of casualties is unknown, but it is assumed that 16 000 fighters died and up to 200 000 civilians, along with 10 000 Germans. Since the war, the Warsaw Uprising has held a sacred place in Polish history, as a symbol of resistance and the strength of the Polish people.

However, 66 years on critics are starting to ask the question: was it all worth it? Ultimately, the resistance fighters succumbed to the Nazi occupiers. The city was destroyed and the loss of human life was enormous.  Critics believe that too little attention has been paid to the price Warsaw and its population paid in those 63 days. In his new book, Marcin Napiórkowski examines the Warsaw Uprising and applies contemporary research on collective memory to understand why the uprising remains so important to Poles and particularly Varsovians, today.

Marcin Napiórkowski: How is it possible that after 72 years we are still arguing over the Warsaw Uprising? Why hasn’t it become a closed chapter of the past, like the November and January uprisings? Something that we honor and commemorate, but which no longer provokes violent emotions…

Mourning for the Warsaw Uprising remains unresolved today not because we are unable to, or don’t want to remember the suffering or heroism of the insurgents. On the contrary! Society, or at least certain groups, remain in a state of permanent mourning because with the help of historical analogies, one can easily label reality: to argue about what it means to be a Pole, a European, a Varsovian…

With regards to the Warsaw Uprising, today you can simply carry out acts of ‘memory vampirism’, feeding off its power which has been accumulated by decades of phantasms.

In my book I try and show that this is because the mourning process after the uprising still remains incomplete. There have been various factors which have been an obstacle to it. In  order to understand this, we need to look at the history of memory.

During the time of the Polish People’s Republic (1945–1952), this unresolved trauma caused a vital discord between the expectations of society and communist propaganda. The failure to fully mourn before 1989 can thus be explained by the fact that no one was allowed to discuss the uprising, or if they did, they were forbidden from going into certain details.

The first years after the transition were in turn dominated by thoughts of securing the future. The Polish people’s fantasies were realized with dreams of business successes and a world populated with characters straight out of an American TV series. Because Poles were left in some kind of psychological repression during this period, the “work of mourning” did not take place… We were so busy trying to catch up with the West, that we did not have time to reflect.

This hegemonic narrative of modernization collapsed somewhere around 2004. Some were already at this time quite satisfied with their successes to reflect in peace; others had so many disappointments to not yet invest all of their fantasies in the future. Memory has now returned to the mainstream public debate. The Polish imagination is once again full of heroes from history.

Therefore, although my book is about the history  of memory, I hope that it will also turn out to be an inspiring contribution to the debate about contemporary Poland, explaining not only events from the past, but also what is happening here and now- just outside our windows and away from our computer screens.