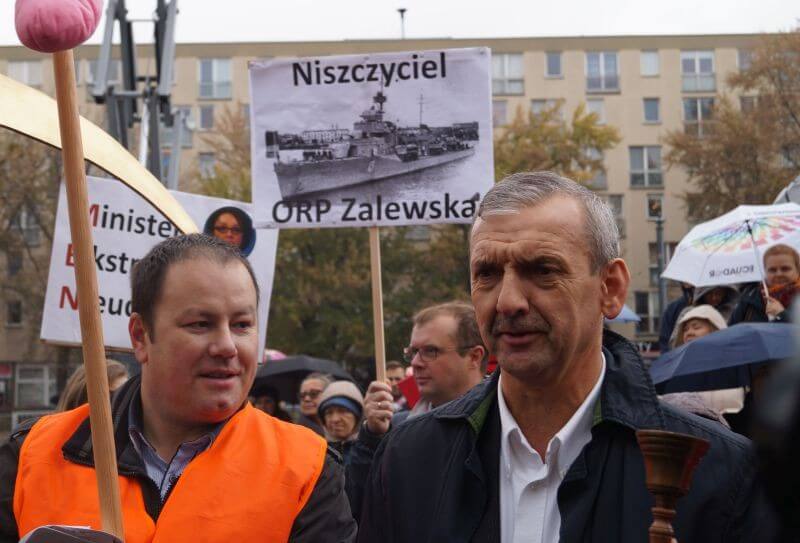 In 1999, the Polish Teachers’ Association (Związek Nauczycielstwa Polskiego, or ZNP) protested against the creation of the 3-year gimnazjum, an additional level of schooling between elementary school and high school for students aged 13-16. Why is the ZNP now defending a system which it had previously opposed?

When it was first introduced by the political party, Akcja Wyborcza Solidarność (Solidarity Electoral Action, AWS), the reform was opposed by both the ZNP and the public. I often come across the argument that someone who had protested against gimnazja should not now defend them. It is difficult to find anyone who participated in the introduction of that reform without reservation. I have recently met with dozens of teachers and local government leaders, none of whom were enthusiastic about the changes that were made 17 years ago.

Today, I would say that, in its opposition to the 1999 reform, the ZNP was not completely just. However, the argument that the system was ill-prepared for reform was correct and very real! We did not have the money, the buildings, the staff, the labs or even the textbooks necessary to implement such reform! The reform was successful only thanks to the commitment of individuals. In this light, the objections today are all the more valid: research clearly shows that reverting to the anachronistic model originating in the Communist People’s Republic of Poland will do more damage to our education system than the problems which have arisen from the introduction of this previous reform.

The 1999 reform was intended to reduce social inequality and increase opportunities in education for children in smaller cities and towns. What is the intended function of the latest Law and Justice (PiS) reform today?

We do not know where this road will lead us; we only know that it will be difficult to follow.

The long-term goal is the education of the new Pole. I find this worrying. The way in which the core curriculum has been discussed suggests that ideological instruction, rather than the transfer of knowledge and skills, is the government’s key goal. The chairman of the committee responsible for compiling the new school reading list recently explained that the Harry Potter books would not be included in the curriculum, ‘because they propagate a damaging view of a caste society’ and ‘can be read as a political fable in the context of the events in today’s Poland’.

Shaping a new national identity is a long-term commitment. So why has this reform been put together in such haste?

The short-term objective of the reform is the replacement of managerial staff – both in schools and in education administration in local governments. However, the didactic goal is completely unclear.

Does the available research really suggest that nothing should be changed?

The evidence of numerous international reports would suggest so. First, we may take into account the evidence of the TIMMS report, which compares the students’ scores in mathematics and science, and the PISA report, which gives us insight into the students’ quality of reasoning in natural sciences, reading and interpretation, and mathematical skills. Among EU members, we are currently in fourth place with regards to reading and interpretation skills, in sixth place in mathematics, and in tenth place in scientific reasoning. These statistics are based on the performance of Polish 15-year-olds in the 2015 international PISA report. Polish students scored 501 points in scientific reasoning. This score is on a par with 15-year-olds in Ireland, Belgium, Denmark, Portugal, Norway, the United States, Austria, and Sweden.

We must also take into account students’ positive achievements in contests and Olympiads. Finally, we can examine a range of international exchange programs which allow us to look at Polish schools through the eyes of teachers in various countries – from Sweden to Portugal and Spain. Articles criticizing the model of education which are expected to be designed by the new administration have been published in the United States. These articles point out that privatizing the system is a pathway to an increased segregation of students, a decrease in the education system’s global score, and a reduction in the provision of equal opportunities. They offer the school systems of Sweden and Poland as positive models.

According to the ZNP, what does need to be addressed in the core curriculum, if it is not already perfect?

We need to give teachers more autonomy and time to meet the curriculum’s requirements.

Changing the structure of schooling or the core curriculum is not the key to improving our situation. First and foremost, we need to give teachers more autonomy and time to meet the curriculum’s requirements. We have to remember that, alongside textbooks, the internet is an invaluable source of knowledge, and one which has redefined the role of the teacher. More freedom in teaching would surely bring about greater success than a ‘revolution’ which would, in fact, cause us to revert to an outdated system. Even four-years of high school will not help much if it is dominated by anachronistic encyclopedism, and only retained in the short-term by students.

Teachers’ protests in November revealed that the planned reform is unpopular in many circles. In Piłsudski Square in Warsaw, teachers’ union members, local government members and parents protested hand in hand. Yet the government seems determined to press ahead with the reform. What impact do you think these protests might have had, if any?

If the intention behind these protests had been only to oppose Minister Zalewska’s ideas, they would still have been valuable, because the proposed reform is simply detrimental to the system. However, a crucial aspect of our mobilization is to convince parents that education is an important aspect of social life. This means that it cannot remain a concern shared only by schools and teachers. Increased parental involvement in their children’s education is essential. Parents cannot limit themselves to attending PTA meetings and making sandwiches for final exam days. We need to assume joint responsibility in helping our children to achieve their potential. Here in Poland, all too often, we harbor the belief that the family’s role is limited to the home, and the teacher is meant to do the rest.