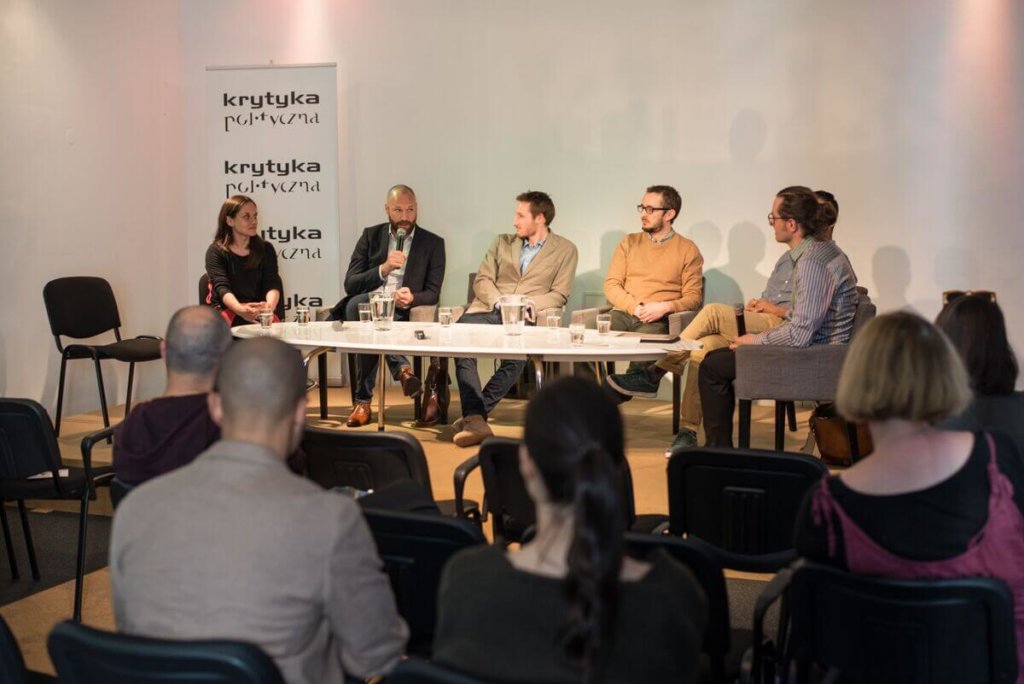 This meeting of “Poland for Beginners” brought together editors of various diaspora/ minority magazines in Poland. The panelists discussed the theme of “how much voice” they have been able to obtain in Polish society through their initiatives and to what extent they have succeeded in becoming a part of Polish culture.

The moderator, Teodor Ajder, co-founder and editor contributor of Mamaliga de Varsovia, talked with Claudia Ciobanu, also a co-founder and contributing editor to Mamaliga de Varsovia; Angelo Emo, editor and contributor at Gazzetta Italia; Ted Bergdahl, producer and publisher of Polenpodden; Vlad Guzman, co-founder of the magazine Write the City; and Daniel Tilles, one of the two editors and writers of Notes From Poland  and the blog’s facebook page. Unfortunately, Wassem Abou Hasan, editor in chief and founder of Polandinarabic.com., couldn’t attend the discussion due to some legal issues keeping him from coming into the country.

When the speakers were asked about “Otherness,” and if they consider themselves – as personal figures and professional editors – to be “aliens” in Poland, most of them declared their disagreement with the term because it is technically correct but has a slightly negative association. They presented the various sides of their existence in Poland, on one hand presenting their professional work, and on the other narrating their experiences as migrants in Poland and how they try integrate themselves within Polish society, as well as within the media. An effort has been made for keeping the publications open and making connections between “Others” and locals.

Claudia Ciobanu talked about Mamaliga de Varsovia, a magazine and online platform established two years ago for the purpose of giving voice to and keeping alive the Romanian language. There have been two printed editions, anthologies of texts, with the second focused on migration. Ted Bergdahl talked about his nonprofit work on the radio, and how his work is done in cooperation with Swedish new agencies so as to cover Polish media in Sweden. Angelo Emo presented his two services: a magazine to promote Italian culture, and a newsletter that consists of economically-oriented news. Daniel Tiles explained that through his blog, he wanted to analyse “the aspects of culture to a broader audience and bridge the gap between academic and popular writing.” On his Facebook page he promotes and discusses Polish news. Vlad Guzman talked about his literary publication, which gives voice to people who want to express themselves in several languages. The texts are being edited in English and the publication is nonprofit.

When answering the question on if they think they are building a new image of Poland abroad, most replied variously. They all hope that their work has such an impact, but everything depends on the audience. Sometimes the image they create of Poland confirms the pre-existing image of the country, and other times it challenges it. The intention to be image builders is a strong area of focus; through media work, diversity can be created and promoted.

Watch the full video at Time To Talk Debates.