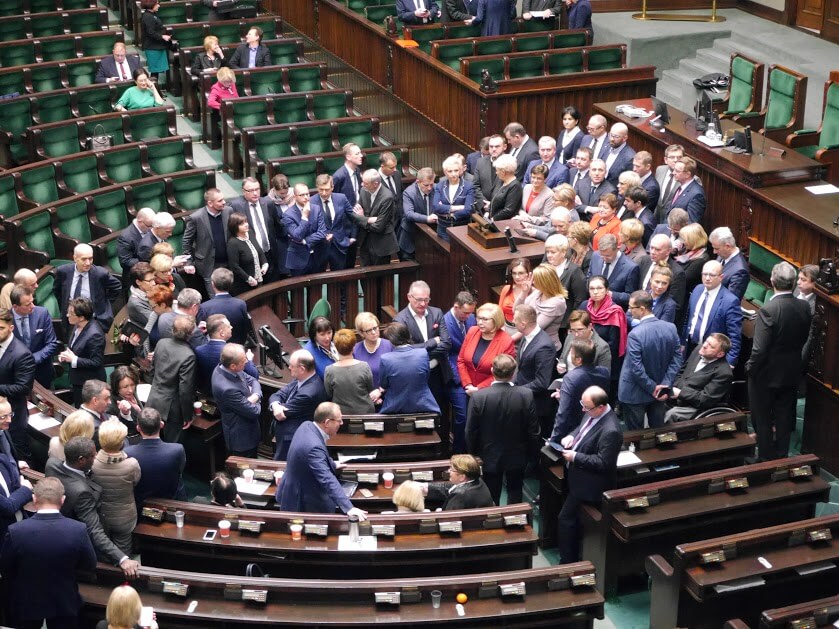 Today ended a three-week occupation of the plenary room of the lower house of the Polish parliament (Sejm), undertaken by deputies of two opposition parties (the ex-ruling Platforma Obywatelska [Civic Platform] and new liberal Nowoczesna [Modern]).

The deputies began their occupation to protest against the anti-democratic actions of the ruling far-right Law and Justice party which, with its total parliamentary majority, hold on government and the Poland’s presidency, aims to subordinate the social, political, end economic lives of millions of Poles.

Driven by conservative, religious and nationalistic views, the party is bypassing rule of law, dismantling the basis of a democratic state and demolishing the customs of political dialogue.

The occupation started because a deputy from an opposition party was excluded from the debate over the country’s budget by the Sejm Speaker. The reason: the deputy held a banner at the debate calling for media freedom, against the recent announcement of parliamentary authorities to restrict journalist access to Polish parliament proceedings.

After the deputy was excluded, opposition party politicians blocked the plenary room’s rostrum intending to break up the session. The session was moved to Sejm’s Column Hall where the budget was voted through (illegally, according to opposition party politicians, many commentators and observers, who raised questions on whether the minimum number of MPs needed to vote had been met).

Over the next days, thousands of people gathered in front of Polish parliament building to support the deputies that were resisting. The deputies continued to occupy the plenary room, until January 12 when the occupation was suspended to open space for dialogue on resolving the matter: media access to parliament proceedings and the legality of the 2017 Polish budget act.

The protest of deputies was supported by thousands of Polish citizens, social movements and the extra-parliamentary political opposition. DiEM25 has been closely following the developments of political crisis in Poland. We have been expressing our support for the protests of Polish people, providing international attention to (among others) the Women’s Strike of October 3, 2016, and our making clear our concerns for the future of democracy in Poland.

At the same time, we’ve been witnessing how the EU institutions were unable to adequately support Polish democratic forces in their efforts to challenge far right authoritarianism. Until now, no EU actor – neither the European Parliament, the European Commission nor the European Council headed by Poland’s own ex-PM – has contributed to this latest democratic struggle of the social and political opposition forces in Poland.

Their inaction is a symptom of the corrosion of EU democracy itself.

Therefore, we once again express our support for democratic movements, organisations and political parties in Poland, and appeal to our European allies not to leave Polish people alone in their struggles for dignity, equality and democracy. Yanis Varoufakis stated on January 2 that “Poland will be a major battleground for progress and liberty in 2017. DiEM25 will be there!”. We invite all the democrats of Europe to be there with us.