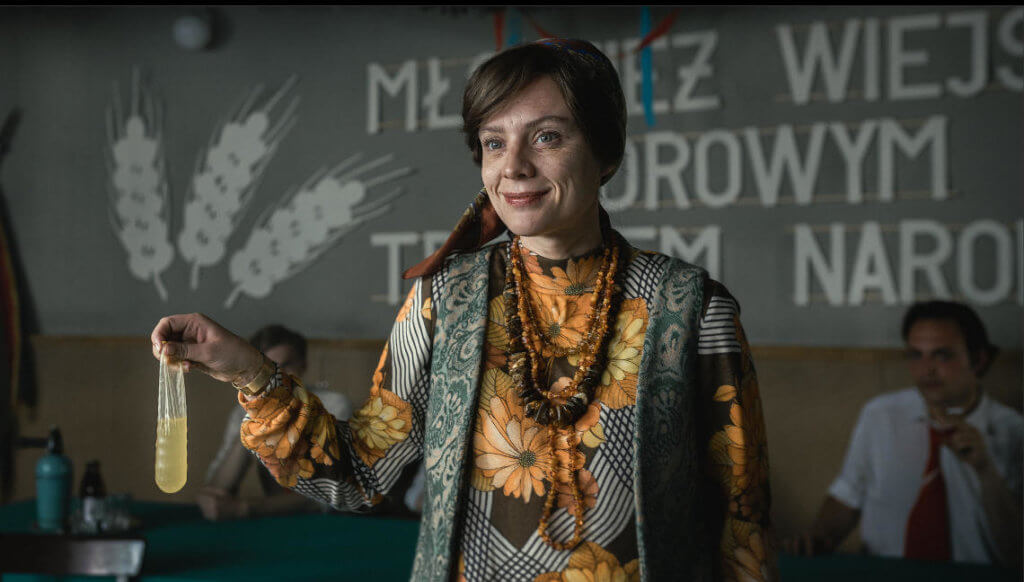 Michalina Wisłocka’s The Art of Loving ( released in Poland in 1976) is not a contemporary handbook on sex education, but rather an adorable part of a greater running order – a documentation of the era in which it was written. Maria Sadowska’s film, The Art of Loving, takes us back to the time in which it’s set. In the two weeks since its premiere, over one million people have been to see the film. Sadowska’s motion picture has provoked a discussion in the form of a revolutionary sexologist. Is Wisłocka the feminist version of Kinsey, or the duet of Masters and Johnson from Central and Eastern Europe?

Attacking Wisłocka for not being enough of a feminist makes no sense, for she never was a feminist.

In Poland, some believe that if Wisłocka were still alive today she would have lead the Black Protests that took place across Poland in late 2016 in the defence of reproductive laws. Others instead allege that her writings encouraged rape culture (for example, she wrote about men “overcome by sexual tension” and the reckless girls who got them into trouble). Attacking Wisłocka for not being enough of a feminist makes no sense, for she never was a feminist, and the reasoning behind her conservative nature lies within her date of birth.

Who is the Michalina Wisłocka as represented by director Maria Sadowska? A modern heroine of pain. In the film, which is set between the 1940s to the 1970s, a young Wisłocka parades around in hipster creations such as men’s trousers and short hair, looking uncomfortably queer. Her relationship with her husband and female friend is not a love triangle, but rather a manifestation of polygamist relations with her modern dilemmas. However, this is only a film.

Let’s separate the book from the author and the film character from its archetype. Her complicated relations with love are not based on a relationship between three people who happen to bump into each other on the embankment of a lake. Stanisław, much older than Michalina, chooses his teenage student as his future wife and carefully grooms her for the role she will have to undertake, all in accordance with his script. He prepares her for the role of married life, something Wisłocka describes in minimal detail, and also for the role of his future assistant, which requires a minimal amount of medicinal knowledge and for whom a diploma will be of no use.

The raising of a wife by a Mr. Husband is a scheme which does not only exist within pre-war customs. And, in this example, Wisłocka breaks free and is very feministic in doing so.

It is a certain that Wisłocka did not stumble upon the term ‘second-wave feminism.’

However, it would probably be difficult to refer to Wisłocka as a feminist in today’s times. She was simply an overworked woman and a lonely mother, without a penny of child support and trying to make a career as a scientist in a man’s world. It is possible that Wisłocka read science magazines and it is a certainty that she did not stumble upon the term ‘second-wave feminism,’ whilst simultaneously postulating that “private is political”. The Second Sex, a book by Simone de Beauvoir, was only translated into Polish in the 1970s; and the first second-wave texts did not appear until the 1980s.

However, an undeniable merit to Wisłocka is educating the masses on sex. Her teachings have been applied by over six million Polish readers. The fact that a handbook from half a century ago has aged can be forgiven as there are now many more options on the market today.

Sound familiar? The reality is that in today’s Poland, priests voice their anger whilst doctors remain silent – as it’s them that makes money from back alley abortions. It would be interesting to see what Wisłocka would have to say on the matter.

Iza Desperak
Iza Desperak is a sociologist, feminist, and academic teacher. She teaches at the Insitute of Sociology at Łódź University. She edited the book "Homofobia, mizoginia i ciemnogród?" (Homophobia, Misogyny, and Obscurantism?) and authored the book "Płeć Zmiany" (The Sex of Change).
> see other articles <