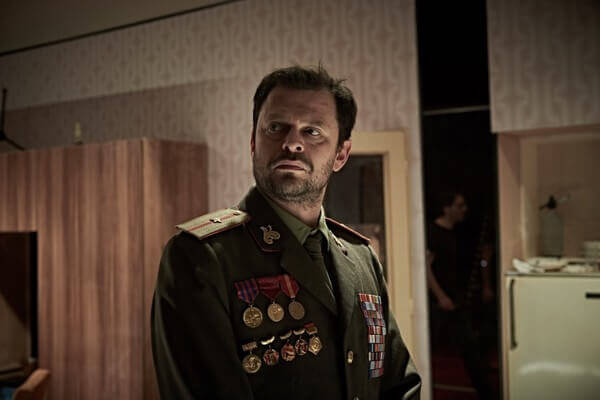 Elites is split into two parts. I will focus primarily on the ideological framework of the production in this review, rather than the theatrical technicalities of the adaptation itself. The first part of the play reveals the ways in which the StB (the communist secret police) recruited new agents and collaborators. Despite a one-sided image of the regime, one has to appreciate the multi-faceted characters: a wide range of motivations behind the collaboration of Czech citizens with the secret service is presented.

The second part features Táňa Pauhofová as a journalist interviewing unnamed members of the current elite – most likely Babiš, Široký or Lorenc. The moral authority of the play is the chairman of the Institute for National Memory, an institute dedicated to unveiling and publicizing the actions of repressive structures between 1939 and 1989. This part raises the central anti-communist message which aims to ideologically purge the capitalist system by laying the blame for current problems on the shoulders of an amoral elite whose power springs from their shady dealings pre-1989.

Elites becomes a mirror for the creators of the play, and the anti-communist ideology they personify.

The play opens and closes with a mirror, in an original, although maybe rather unsubtle way, allowing the audience to see their own reflection. The somewhat clichéd metaphor of ‘holding up a mirror’ immortalized for (and ridiculed by) generations of Czechs and Slovaks by socialist-era news and movies gains new meaning in this context. Elites becomes a mirror for the creators of the play, and the anti-communist ideology they personify.

This mirror reveals that the victors of the 1989 revolution will maintain the story of how evil communism has spawned the amoral elite of today at any cost. One of the characters states declares that the worst thing about communism the way in which it erases the difference between good and evil. Communism is to blame for our amorality and the amorality of elites that rule us. That is why democracy (supposedly) does not work and why people have become so disillusioned – maybe we are the last generation that can still enjoy it for this reason.

The play follows a basic narrative; the transformation from communism to democracy is unfinished or incomplete. According to this narrative, only a generation which has not been compromised by the corruption of communism in any way can make a success of democracy in a post-communist country. The problem is that we have already met this generation – and society’s flaws have not been resolved. Luckily, another guilty party is readily available, the StB-raised, Moscow-educated elite that rules us.

Anti-communism as a cliché

This reference to disillusionment in democracy is where the play simply begs critics to tear it to pieces. If communism is really the root of all our problems, what explanation would the author provide for the presence of similar issues in ‘old democracies’?

The problem of the play is that it does not add anything new to the dominant anti-communist discourse.

One character mentions Germany, a country which has dealt with the legacy of Nazism and supposedly strictly enforces the rule of law – but then, where does the corruption evident in the behavior of Siemens or the fraud committed by a Volkswagen executive spring from? Were these corporations infiltrated by former agents of the Stasi? When communism does not offer a convenient explanation, where can you find the roots of rising support for the extreme Right while traditional liberal-democratic parties lose ground all over Western Europe?

The corruption of capitalism of Slovakia definitely springs, in part, from the actions of an economic elite formed by the amoral environs of the secret services. But Slovakia shares such questions of inequality and poverty, the rise in psychological disorders and the devastation of the environment with countries not just to the east, but also the south and the west of its borders.

The problem of the play is that it does not add anything new to the dominant anti-communist discourse. Unlike Das Kapital, in the Arena theatre, or the National Theatre’s Carpathian Thriller, Elites remains a prisoner of the ideology of the ‘transformative process’ that took place in the nineties. Where Gindl poked fun at the theory of lesser evil and Lomnický quoted Marx, even with its imaginative form and the amazing performances by the actors, Havelka offers only a well-worn cliché.

We are engaged in an endless search for the roots of the issues plaguing society today everywhere but within this system itself.

A need to confirm one’s own idea of truth is felt most by those who feel threatened. The anti-communist elite has been under threat since the economic crisis in 2008 which exposed the real impact of capitalism for all to see. While the crisis did give rise to a degree of self-reflection, the need to prove that democracy is a pillar of capitalism that succeeds where communism has failed, is still felt. The result is complete ignorance of the true foundations of the system. Instead we are engaged in an endless search for the roots of the issues plaguing society today everywhere but within this system itself.

Elites only reinforces this idea. This ideology replaces a thorough analysis of the system’s current state by perpetuating the illusion that the past still determines the present.