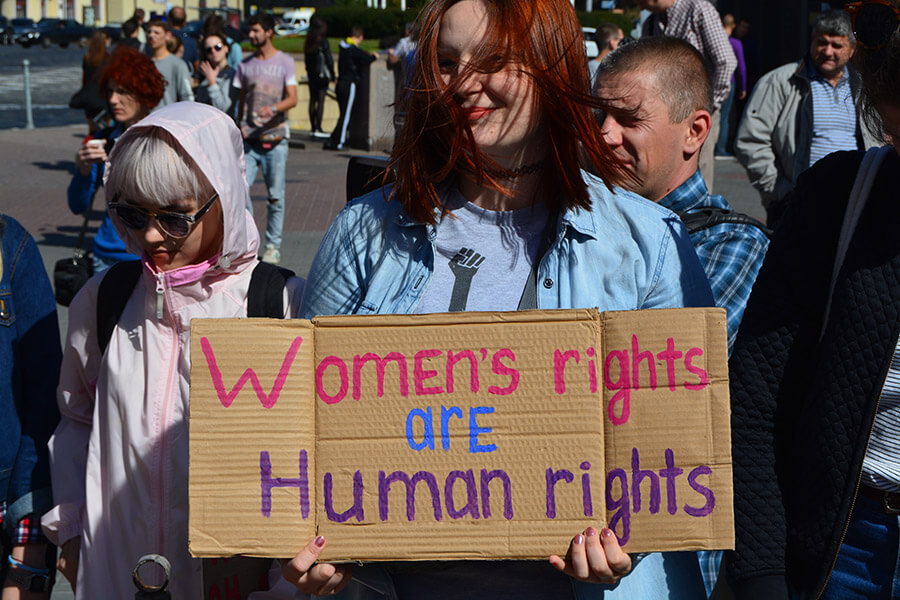 The #IAmNotAfraidToSpeak social media movement, which demonstrated the prevalence of rape culture in Ukraine, unexpectedly became one of the most notable events on the Ukrainian Internet. Launched by a single Facebook post, the initiative flooded the web. Women who had been victims of sexual violence or harassment were encouraged to overcome their fear of being judged and misunderstood, and to share their stories. Their response shocked society to such extent that some people even refused to believe that the testimonies were true.

The so called “online flashmob” demonstrated that nearly all women have experienced sexual harassment or assault in some form at various stages of their lives. And for most of them, this was the first time they dared to speak out.

The #IAmNotAfraidToSpeak initiative managed to lift the veil hiding this traditionally silenced topic and gave women an opportunity to speak up, to feel that they are not alone, to become visible. And on September 17, the next step was taken —#IAmNotAfraidToAct demonstations took place in Kyiv city center and seven other cities in Ukraine. 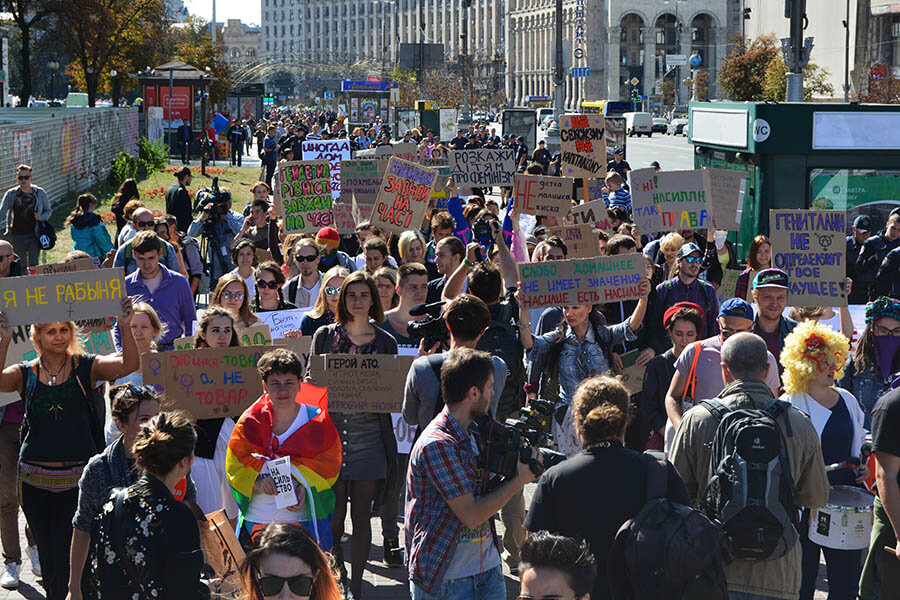 The participants explained that they went out into the streets to protest rape culture and the systematic silencing of cases of sexual harassment in Ukrainian society. Society tends to turn a blind eye to domestic violence, to “excuse” the man because of his “natural needs”, or to blame the victim, who supposedly provoked the assault herself with her appearance or behaviour.

“We have organized this demonstration as a follow-up on the flashmob #IAmNotAfraidToSpeak. At first we thought it would happen by itself, we expected women to go out into the streets of their own accord, as it had happened in the West. Unfortunately, it did not happen, so we decided to give society a little push. We hope that stories of violence will no longer be silenced or ignored in the future, and that we will have a chance to live in a safe society,” says Yulia Moroz, one of the organizers of the demonstration. 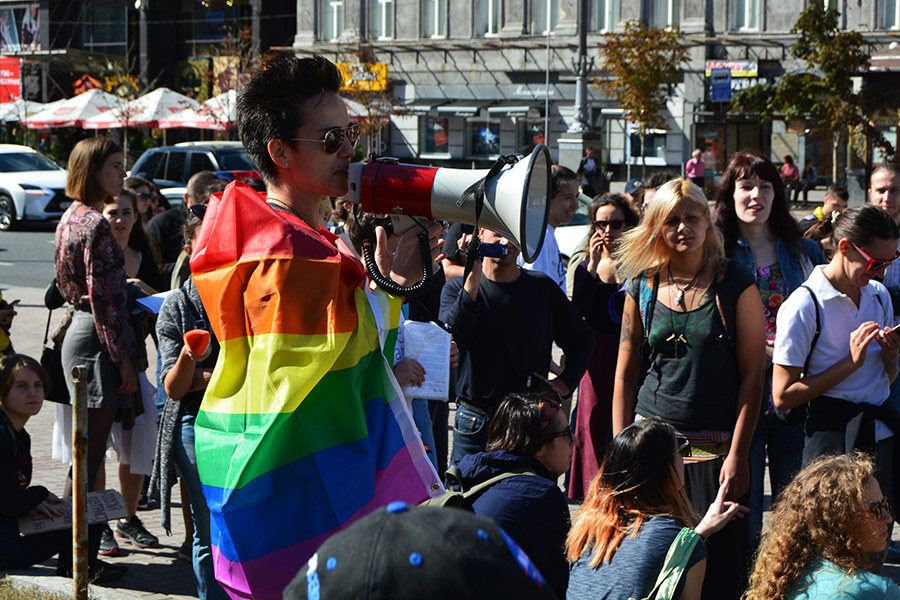 The activists gathered in front of the Dnipro hotel on European Square. Here, the participants could pick one of the banners, prepared in advance, which exemplified the most painful problems and demands: “To beat up means NOT to love,” “Not a baby, not a cutie, not a chick,” “Women’s rights are human rights,”

“Do not teach me how to dress, teach them how not to rape,”

“Testosterone is not an excuse,” etc. Then, about 150 participants marched towards the Maidan.

The colorful bunch walked down Khreshchatyk street, catching camera flashes and the surprised gazes of the visitors in numerous cafes. The first stop was Independence Square (a.k.a. Maidan), the second was in front of the Kyiv City Hall, where the participants gave speeches. The activists demanded that public officials implement the Istanbul Convention, the Council of Europe treaty on preventing and combating violence against women and domestic violence. The  implementation of the provisions of the Convention involves forming independent commissions for combating domestic and gender-based violence which are to cooperate with women’s community organizations and NGOs, as well as creating crisis centres, centres for medical rehabilitation, as well as free hotlines to provide qualified and confidential help to victims of gender-based or domestic violence. 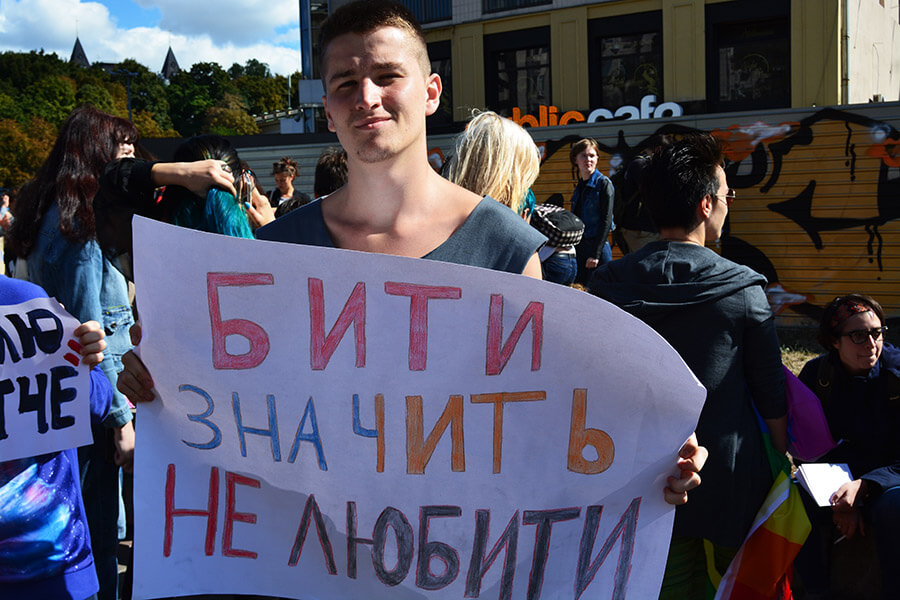 The activists specifically highlighted the problems faced by women in the course of the war in the east of the country. “We wanted to raise the issue of antimilitarism, since the war is producing rape culture and encourages violence against women,” said Maryna, an activist of the student organization FemSolutions. “The banner I’m holding tells a story that actually happened two months ago. An Anti-Terrorist Operation soldier raped an underage girl and was given only a two-year suspended sentence and a fine of UAH 3000 (approx. $115) as a moral compensation to the victim. His case file says, literally, that he has not been convicted previously, has to support two children, has a job and has served in the ATO. So let him rape, he should just pay the 3000. I am against tolerance of violence committed by so-called ‘heroes.’ Heroes are supposed to protect women and children, and not beat them up or rape them. Unfortunately, talking about these issues means saying that you are against the war, which is not a very popular opinion in our country.” 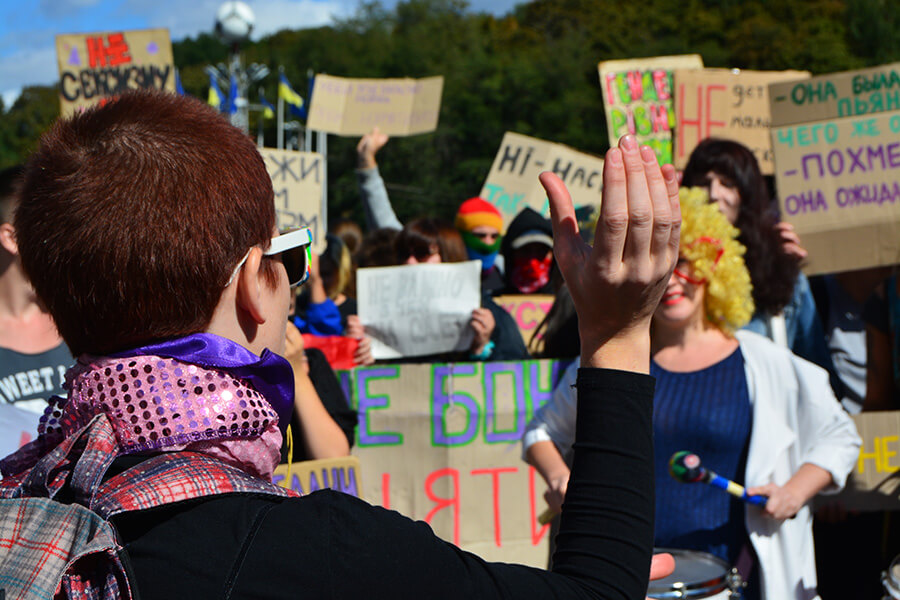 The organizers admitted that the demonstration did not gather as many women as they expected. For many women, even sharing their personal experience on their Facebook pages was a huge step in and of itself. Even if the stories did not mention specific names, these kinds of major traumas are difficult to talk about. And going out into the streets and becoming visible turned out to be even more difficult. However, the success of the online flashmob and the fact that the demonstrations were organized in several cities is telling evidence that the situation is changing and that the issues of rape culture and gender-based violence are gradually getting out in the open. 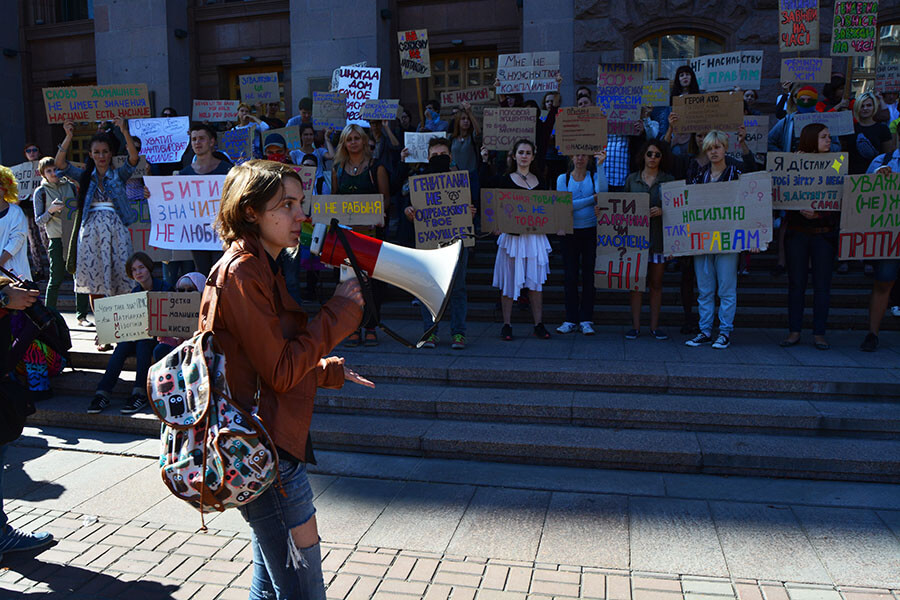