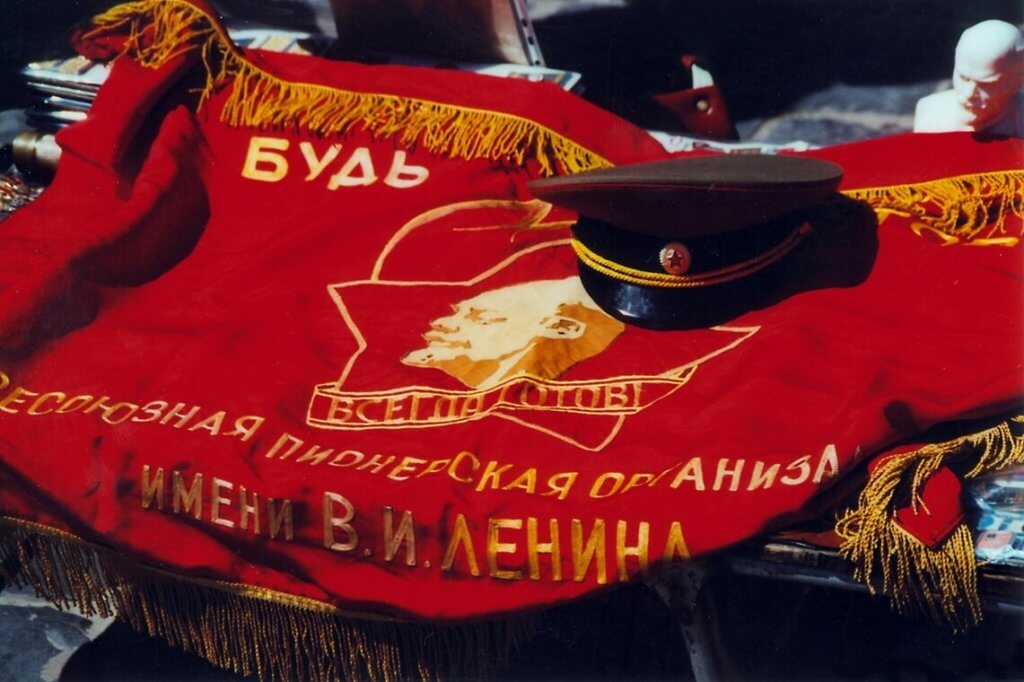 Probably not. Or maybe they are just in the process of reaching that era? The front pages of Ukrainian newspapers regularly feature news of another street or city re-naming, or of the dismantling of another Soviet monument. Officials and activists trying to out-do each other’s level of patriotism enthusiastically report the achievements of the decommunisation movement and the steps that make Ukraine closer to Europe. Their enthusiasm is so fierce and their methods so familiar that even some of the undoubtedly pro-Ukrainian intellectuals note that decommunisation is more and more often carried out in accordance with the best Soviet traditions, i.e. on a grand scale, under centralised control and without taking the opinion of citizens into account.

There are so many examples, including those of Kropyvnytsky (former city of Kirovohrad. The renaming of this city was controversial because, according to some interpretations, the playwright Marko Kropyvnytsky, whose name was given to the city, did not like it at all and left it as soon as he could) and Horishni Plavni (former city of Komsomolsk. The new name is mocked by Ukrainians because it sounds funny to the Ukrainian ear). In Kyiv, Moscow Avenue was renamed Stepan Bandera Avenue, despite the wishes of a considerable number of residents to have a neutral name. There is a bus stop called “The Temple of the Icon of the Mother of God the All-Queen” (in Ukrainian, the “All-Queen” – “Всецариця” –  title sounds just as unnatural as in English) on the avenue that (still) bears the name of the Soviet poet Mayakovsky. The “obscene” Soviet mosaics on the Lybidska subway station are now covered with a metal sheet. Streets named after Kropotkin, Sacco and Vanzetti and other figures who were not at all related to the Soviet government and even opposed to it, were also renamed. These and many other cases of top-down decommunisation imposed on us by enthusiastic officials raise serious questions about the democratic nature of this procedure and about the competence of those who carry it out.

But even these seemingly progressive voices who call for more moderate and better designed decommunisation, even those who are worried about the Institute of National Memory’s monopoly on historical truth, or encourage it to seek the approval of local communities’ over any renaming, share the belief in one very questionable claim: that decommunisation actually makes any sense. That it could change anything.

At this point, a whole fantasy world has been revealed in front of our eyes.

A friend of mine, an activist from Belarus, recently asked me, “And what are they planning to do with the People’s Economy Achievements Expo in Kyiv? I heard that there will be a museum of totalitarianism in it?” Because it’s “obvious” that SOMETHING NEEDS TO BE DONE with monumental Stalinist buildings of the exposition centre, decorated with stars, hammers and sickles, flags, wheat sheaves and all the other totalitarian stuff. Because…at this point, a whole fantasy world has been revealed in front of our eyes.

Members of nationalist parties like saying that nothing will change in Ukraine until former Communist apparatchiks die out or are completely removed from the government. They say that the blame for all the problems of the Ukrainian state lies on the Soviet government and the “Soviet mentality,” which, supposedly, is completely lacking in the heads of the young generation. And anything that reminds us of the Soviet government only reproduces totalitarian discourse and prevents the country from developing. Therefore, the omnipresent Soviet symbols and toponyms hold the Ukrainian people in the trap of collectivisation and “communism,” which we, of course, have already seen before. This discourse seems to lead logically to the ‘wrong flag’ theory, according to which Ukraine will remain miserable until the yellow and the blue in its flag are swapped.

This metaphysical logic ascribes to those who were born in the USSR and have certain, often contradictory, qualities that supposedly characterise them by default. The Soviet people are lazy, they are used to “equalisation” and carelessness, and they cannot compete as equals in the capitalist world. At the same time, it was them who rode the wave of the 1990s and became way too successful. The “red directors” have captured power in the country, privatised the formerly public companies and, unlike the honest entrepreneurs of the western type, keep robbing the population. For some reason, the simple idea that Communist Party members just quickly learned the new rules of the capitalist world and, together with the “young teams,” rushed to make their capitals on the market conditions, is not very popular among “decommunisers”. Neither is the fact that the laws of profit maximisation rather than of dialectical materialism push elites to rob their people, and that oligarchs are, first and foremost, not former Komsomol members but owners of big capital, which is inseparable from politics.

Furthermore, Soviet symbols, as well as Soviet people, seem to command supernatural powers. Not only do these symbols prevent Ukraine from joining Europe, but also, even according to the moderate supporters of decommunisation, they can cause us to regress into the past. These supporters are concerned that, if social and economic problems become more urgent, the pendulum may swing in the opposite direction, making the political and economic model of the USSR once again attractive in the eyes of our compatriots, and turning Lenin and Stalin into great Ukrainians.

But is that actually possible? The Communist Party of Ukraine, the Progressive Socialist Party of Ukraine and other parties which, due to some weird misunderstanding, are habitually called “the left wing” of Ukrainian politics, have catered to the needs of the parties of big capital for most of Ukraine’s independent history, giving them extra votes in the parliament or nominating a convenient candidate for the presidential election. Meanwhile, in the ideological dimension, they became infinitely remote not only from Marxist ideas, but even from the Soviet experience, which they have always used as the nostalgic cornerstone of their rhetoric. These parties have finally turned into strongholds of conservatism and Orthodox Christianity without any realistic claims or prospects. And the events of recent years have demonstrated this clearly.

If society does not recover from the decommunisational war and does not make some actual systemic demands, this situation will repeat over and over again.

In the recent years, power in Ukraine has changed hands many times. Twice, the change was accompanied by mass popular uprisings, but the “left-wing” parties, maybe with the sole exception of the Socialist Party of Ukraine, kept away from these events and took conformist stances. The “revolutions” and “counter-revolutions” themselves had no problem with happening under stars and Lenins. Under these symbols, the “blue” and the “orange” (the colours signify the opponents in the Orange Revolution: blue was the colour of the Yanukovych camp, and orange was the colour of the Yushchenko camp) made their fortunes after they came to power, and turned into fervent members of the opposition as soon as they lost it. The same thing is happening now, too, although there are fewer stars to be seen this time. And if society does not recover from the decommunisational war and does not make some actual systemic demands, this situation will repeat over and over again. With the stars or without them.

Indeed, there is popular demand for such systematic, predominantly left wing changes. For example, according to the latest surveys, more than 60 per cent of citizens think that the right to social security is a primary human right. It lost only to the right to live (70 per cent), which is not surprising given the war in the East of the country. Vox Ukraine, which can hardly be accused of left-wing sympathies, wrote that Ukrainians who took the Political Compass test mostly have left-liberal views. After all, you can hear someone criticising “oligarchs” basically on any public bus.

However, under decommunisation, the demand for social justice cannot be expressed in left-wing terms of class conflict or struggle for economic equality. And the political forces that could pose the question in these terms — even those who are not fond of the Soviet era at all — are traditionally marginalised. Thus, in the end, the avant-garde of the struggle for social justice is represented by…the right. Or social nationalists, as some of them like to call themselves, insisting that it is something completely different from national socialism. Thanks to them, the leftist ideas of social justice, well-oiled by nationalist propaganda and heroism, raise into the air on flags and appear on the agendas of the fighters against the communist legacy.

There can be no question of anything even slightly more radical than social democracy.

Some liberal intellectuals, such as Yaroslav Hrytsak, understand it as well. They understand the skewed situation and the dangers that follow from the increasing popularity of right radicalism in the post-Maidan Ukraine. And they seem to be ready to defend the left — but only the “good” left, the “pro-Ukrainian” ones. These lefts must first confess to their sins, express their loyalty to the Ukrainian state, recognise the leadership of the Ukrainian people, and, together with the right and the liberals (who are also mostly right-wing in Ukraine), start working on the development of the European project. As you have probably noticed, there can be no question of anything even slightly more radical than social democracy. And all those who do not see any unquestionable value in the “state” and the “nation” have no place in these intellectuals’ Ukraine, even though these left-wingers are critical of the Soviet system.

So where am I heading with all this? Obviously, it is not about names at all. Actually, it does not really matter whose name will be written on signs on the central street. What is much more important is the history-centred, mostly mythological approach to politics, which is used in attempts to explain, or simply substitute, contemporary problems. Historical figures are divided into two baskets: the butchers and the saints, the heroes and the traitors. And public politics is constructed by assigning politicians to one of these camps. With this model, where the past dominates over the present, we will never get rid of “totalitarianism”: there will always be some wrong, not-completely-decommunised symbols, people or ideas that stand in our way. And as nationalists become more numerous in the government, there will be more and more of these symbols, people or ideas. Decommunisation will only accelerate.